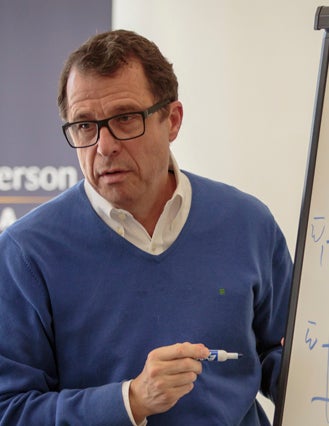 Sebastian Edwards is the Henry Ford II Chair in International Management at the UCLA Anderson School of Management.

From 1993 until April 1996, he was the chief economist for the Latin America and Caribbean region of the World Bank. He is a research associate of the National Bureau of Economic Research (NBER), a member of the advisory board of Transnational Research Corporation and co-chairman of the Inter-American Seminar on Economics (IASE).

Edwards is the past president of the Latin American and Caribbean Economic Association (LACEA), an international professional association of economists with academic interests in Latin America and the Caribbean region. He is a member of the Scientific Advisory Council of the Kiel Institute of World Economics, Kiel, Germany.

Edwards has been a columnist for the Wall Street Journal and is the author of more that 200 scientific articles on international economics, macroeconomics and economic development. His articles have appeared in The American Economic Review, The Journal of Monetary Economics, The Economic Journal, Oxford Economic Papers, The Journal of Development Economics, The Quarterly Journal of Economics, the Journal of Economic Perspectives and other professional journals. His work and views are frequently quoted in the media, including the New York Times, Financial Times, the Los Angeles Times, Wall Street Journal and the Economist.

Edwards has been a consultant to a number of multilateral institutions, including the Inter-American Development Bank, the World Bank, the IMF and the OECD. He has also been a consultant to the United States Agency for International Development, and to a number of national and international corporations. He has worked in Argentina, Brazil, Bolivia, Chile, Colombia, Costa Rica, Egypt, Guatemala, Honduras, Indonesia, Korea, Mexico, Morocco, New Zealand, Nicaragua, Tanzania and Venezuela. He has also consulted for a number of international financial institutions and multinational firms.