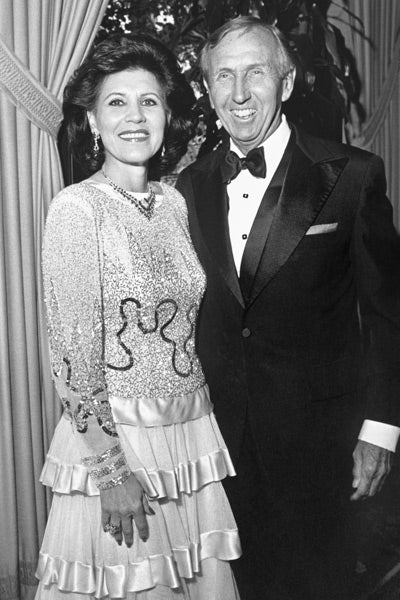 Born in Minnesota, John Anderson (B.A. ’40) was recruited to play hockey at UCLA on scholarship. He met the woman who would become his wife, Peggy Stewart, while both were at UCLA.

After graduating in 1940, John earned a scholarship to Harvard Business School. He earned his MBA, then joined the Navy, serving during World War II.

While in the service, John studied to become a certified public accountant. After the war, he and Peggy returned to California and John took a job with Arthur Andersen as a CPA, attending Loyola Law School at night. In the 1950s, he bought his first company.

As John built his business, he and Peggy raised five children: Sue, Judy, John Jr., Debbie and Bill. The family was close and became closer after a pair of tragedies: Peggy passed away from cancer at age 45 and four years later, Debbie died in a car accident.

John then met and married his second wife, Marion, who became stepmother to John’s children. Marion made her impact on the family business as well.

By the 1980s, John re-engaged with his alma mater, teaching courses and joining the Board of Visitors (now Board of Advisors). He and Dean Clay La Force formed a friendship, frequently discussing the future of the institution. For the school of management to be world-class, John would say, it needed a world-class facility.

La Force and John Anderson set out to find a “name donor.” After a series of meetings failed, John told La Force he’d become that donor.

John set three conditions: the school would be named after him; the Andersons’ gift would be used for a new facility; and the new complex would be built at the corner of Sunset and Westwood.

Since then, the Anderson family’s commitment to the institution has been a constant. In 2015, four years after John’s passing, Marion gave the school a game-changing $100 million dollar gift, which facilitated construction of Marion Anderson Hall, which opened in 2020. Their involvement in the school runs deep. Marion served on the Board and Bill is currently a member. In 2018, Bill delivered the keynote at commencement. John Jr. (’77) is an Anderson alumnus and Judy serves on the board of the Harold and Pauline Price Center for Entrepreneurship and Innovation.The family has continued to support UCLA Anderson financially as well.

The Anderson legacy manifests through the name of the school as well as the courtyard and edifice that bear Marion’s name. The family's contributions have benefited students and faculty, both in the classroom and in research. But the intangible impact is felt strongly as well, through the values John and his family imparted.

John’s belief in education was the catalyst for his support of UCLA Anderson. That was underscored by his deep convictions about ethical business dealings, a point of emphasis in Anderson’s curriculum.

It is perhaps fitting that John Anderson conditioned his naming gift to his alma mater’s business school on a requirement that the school build a first-class facility and that years later, Marion Anderson's transformative gift would add a new structure to the complex. Just as the halls of brick-and-mortar will be a physical home to cutting-edge learning and research for generations, the inspiring influence of the Anderson family will be felt for as long as the buildings stand tall.