A Day of Inspiration and Empowerment

Tangible Impact for the Win

Checking the PULSE of the Entertainment Industry

The day began with gray skies that soon brightened to blue.

And inside the ballroom at the Skirball Cultural Center, it was a day of inspiration, empowerment, warmth, laughter, cheers and sharing from an enthusiastic crowd gathered for UCLA Anderson’s 2019 Velocity Women’s Leadership Summit, presented by the Women’s Business Connection and Anderson Women.

Speakers and audience members exhorted one another to “Be Bold,” the theme of the seventh annual conference, with more than 500 in attendance. “The power of a conference like this is that it provides the opportunity to authentically discover the many faces of boldness,” said Beth Friedman (’87), founder of inher circle LLC and a key sponsor of Velocity. “Some of you will be bold in very public ways while others will change their community and the world more quietly. It doesn’t matter how you do it.” 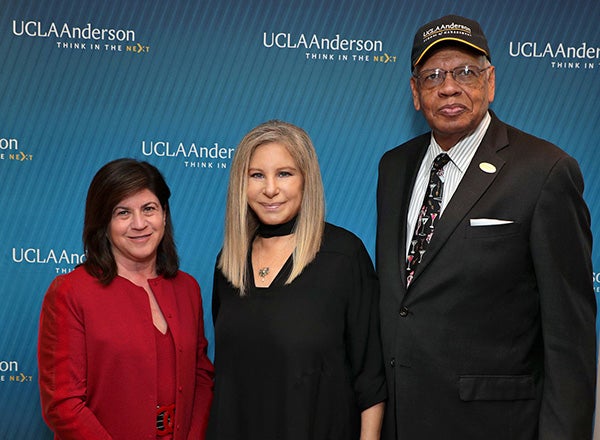 Keynote speakers and panelists shared inspiring stories of overcoming obstacles on the path to success and spoke of quiet regret over missed opportunities. They urged women to encourage and mentor others in the career pipeline, and to seek out mentors themselves, both male and female.

“I’ve been gratified that more and more women are rooting for each other’s success these days, that they’re thinking of themselves as part of a sisterhood and recognizing our common goals,” the multifaceted, award-winning artist Barbra Streisand said as she accepted UCLA Anderson’s inaugural Velocity Award in recognition of her storied career and philanthropy.

“We’re much more powerful when we stick together,” she said to applause.

Streisand said that early in her career, reporters occasionally asked her about a reputation for being controlling when it came to her work. “I’d say kind of defensively, ’No, no, really, I’m not.’ But really,” she said with a smile, “I am.”

Years later, when asked the same question in a 1992 interview, she responded differently, she told the Velocity audience: “I said, ‘Yes, I do want control. I want to be responsible for everything I do in my life and, especially, I want to control my work.’ 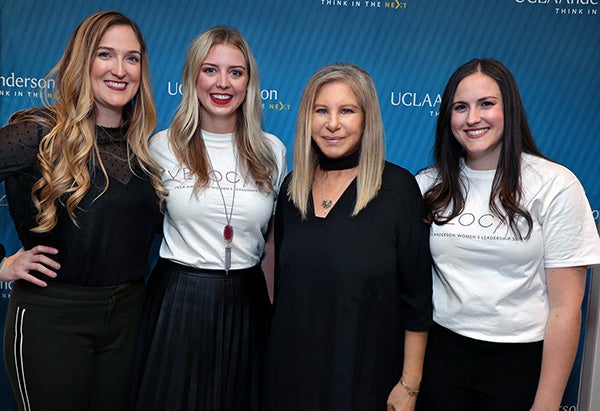 “A male director — actually, a male anything — wants to be in control of his projects and nobody questions that,” she added. “Why should it be any different for a woman?”

Streisand noted many recent advances for women, including a record number now serving in Congress, but said challenges to women’s progress remain.

“We can’t control external obstacles but we can control our own achievements and preserve our own dignity,” she said. “So, don’t wait decades to believe in yourselves, don’t be afraid to use your voice, ask for what you want and question those who say no. Be bold!”

The conference began on a spirited note, as the first keynote speaker, Valorie Kondos Field (B.A. ’87), UCLA’s head gymnastics coach, brought the Skirball crowd to its feet. Like one of her athletes nailing a routine and scoring a perfect 10, she encouraged those gathered to get up and move as she danced her way to the podium to greet interim dean Al Osborne, who introduced her.

Kondos Field shared stories of her life, from her adolescence as a classical ballet dancer to her career as a coach, from her battle with breast cancer to her long friendship with Coach John Wooden.

She spoke of her initial difficulties as a reluctant gymnastics coach, a former dancer and choreographer who had never been a gymnast herself. She shared a revelation that came after she began familiarizing herself with Coach Wooden’s philosophies. Wooden, Kondos Field said, never talked about winning. Instead, he defined success in his own way. “Success is peace of mind in knowing you have done your best,” Kondos Field said, quoting her mentor. “I had the biggest ’aha’ moment of my life. I had been trying to be somebody else. At that moment I realized whenever you try to be somebody else you will always be a second-rate them (and) it prevents you from being a first-rate you.” 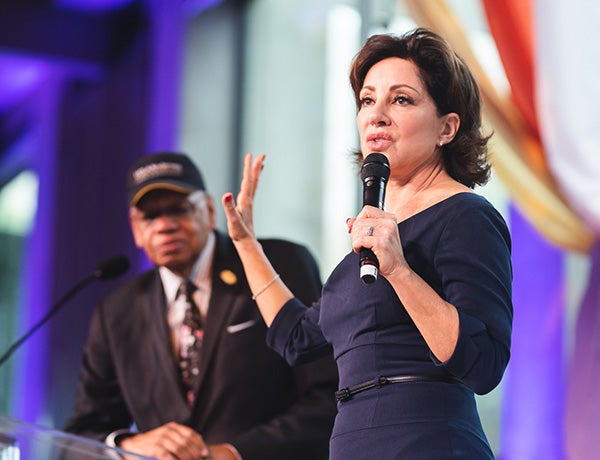 The afternoon’s first keynote speaker, Alli Webb, founder of Drybar, detailed for the women aspiring to become entrepreneurs how she built Drybar from a part-time mobile operation into a nationwide chain of more than 300 outlets. For the men in attendance, she answered the question, “What the hell is a blowout?”

The latter query was just as relevant as the former, Webb said. It was what she heard when she explained her business idea to men as she was contemplating launching the company, which she founded in 2010 with her brother and her (now ex-) husband. Webb credited the success of Drybar to the intangibles. “The number one driver of our business is how we make women feel,” Webb said. “I see the way a woman walks in, all business, hair in a bun, and (when) we spin her around for the big reveal, she just lights up and checks herself out in every mirror on the way out.”

“So, don’t wait decades to believe in yourselves, don’t be afraid to use your voice, ask for what you want and question those who say no. Be bold!”

Webb says she attributes her success to street smarts and determination. “I’ve always had this scrappiness about me and (a belief) that I could figure anything out,” Webb says. “You need that as an entrepreneur. You need to blindly believe in what you’re trying to do.”

The conference closed with a conversation between UCLA Anderson’s assistant dean of equity, diversity and inclusion, Heather Caruso, and Maya Shankar, Google’s global head of behavioral science. Shankar is the founder and former chair of the White House Social and Behavioral Sciences Team. The team (which included UCLA Anderson’s Craig Fox, founding president of the Behavioral Science and Policy Association) was assembled in 2013 to apply scientific data and research to government programs so Americans — especially veterans, the disabled, children and their parents — would have better understanding of and access to them.

Shankar described the many unexpected pivots in her career, remarking that “It’s easy when you hear others’ bios to think that the plan unfolded seamlessly.” For Shankar, cold-calling likely connections — many of whom would become her mentors, like renowned Harvard behaviorist Cass Sunstein, who had also served the White House — made the crucial difference. She said her M.O. was to pursue convictions and ideas before it was altogether apparent how they would manifest. “If I waited for clarity,” she said, “it would have been too late.” Caruso, who has long championed Shankar’s team-building, added, “You were earnest about what could happen, (though) you didn’t know you could do what you set out to.”

Now, Shankar is working to assemble a similar team of social and behavioral science at Google, where she sees potential for practical application in the company’s work with the Equal Justice Initiative.