Although it surely wasn’t the commencement ceremony UCLA Anderson’s Class of 2020 envisioned when the students enrolled in their various programs, circumstances could not diminish the accomplishments and the celebration Anderson’s full-time, Fully Employed and Executive MBAs — as well as the school’s graduating Ph.D.s — so richly deserved.

No one anticipated that a global pandemic would mandate the migration of commencement from its traditional Wilson Plaza locale to the virtual environment of YouTube; nor could anyone have known that the event would coincide with a national reckoning regarding issues of social justice.

But the show did go on, and it featured keynote remarks by Dean Tony Bernardo and commencement speaker Mike Hopkins (’01), senior vice president of Prime Video and Amazon Studios, both of whom acknowledged the realities of current events while finding reasons to be hopeful for the collective future. 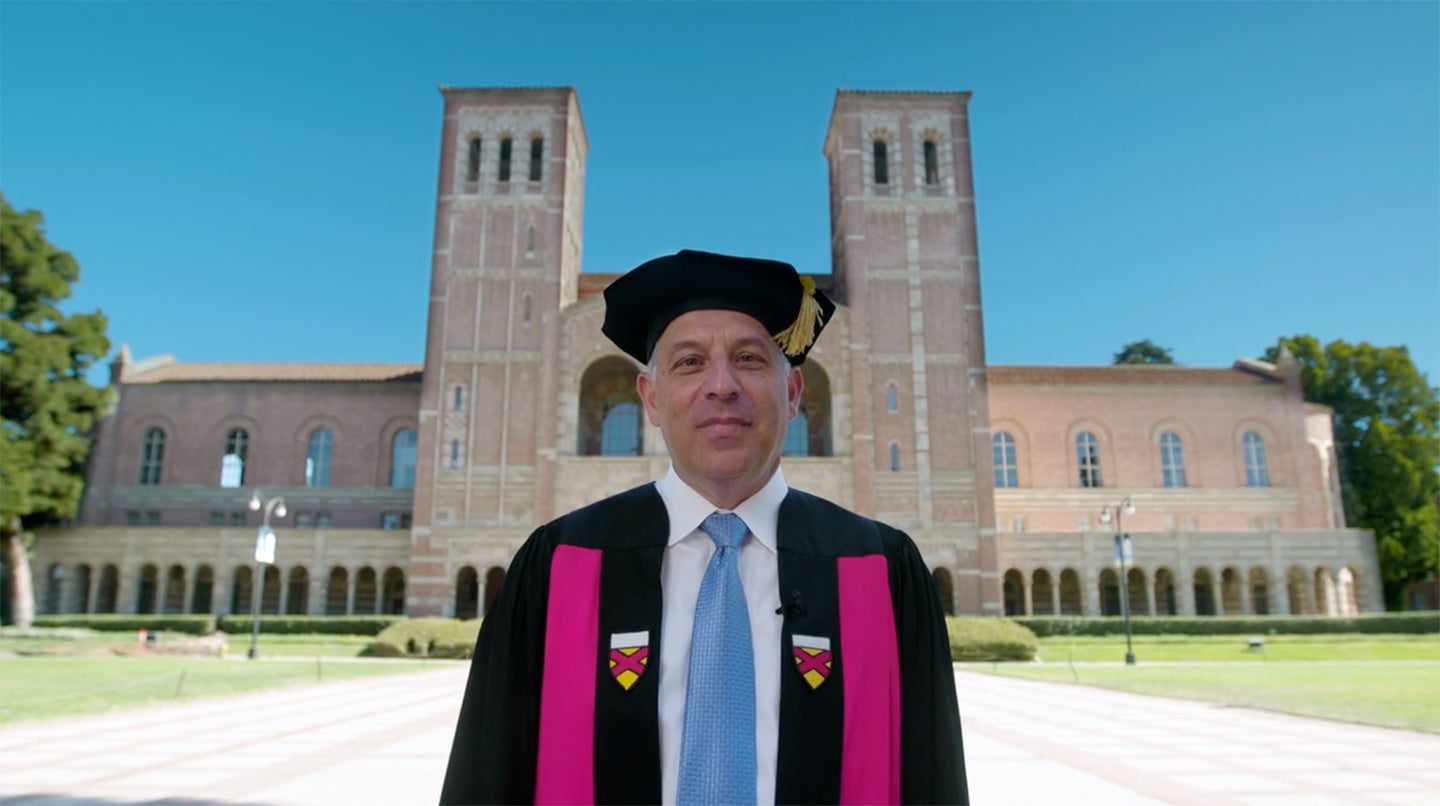 Bernardo recognized the potential of the Class of 2020 to be agents of change. “What occurs to me, again and again,” he said, “is just how much our communities, our organizations and our society need young people like you right now, people with the talents and the courage to make a difference. Our communities and our country have been shaken to their core this spring. I — and I know many of you — have been shaken, too.”

The dean reflected on the May 25, 2020, killing of George Floyd, as well as other African Americans such as Breonna Taylor and Ahmaud Arbery, noting the collective outrage felt by people across the United States and the world. He lamented the “continuing scourge of racial injustice” that casts a harsh spotlight on the inequities plaguing society.

“These inequities, biases and injustices also exist in businesses and organizations of all types, at all levels,” said Bernardo. “I urge you, as UCLA Anderson graduates and as leaders, to commit to doing your utmost to address these difficult issues in your careers and your lives — with an open mind, a courageous heart and respect for all.

“We will all benefit.”

Bernardo then executed a flawless virtual handoff to Hopkins, who offered his congratulations to the graduates, noting they had earned their degrees from “an amazing university.”

Hopkins also spoke about the killing of George Floyd and the ensuing calls for justice and change. He recounted a litany of other issues currently facing the country, including the more than 115,000 U.S. deaths caused by the pandemic and the 40 million people that are unemployed in its wake. “Vaccines can cure diseases, stimulus and innovation can jumpstart an economy, broken glass can be repaired, graffiti can be wiped away. But the racial, societal and cultural wounds that afflict this country are much harder to heal,” Hopkins said.

“A lonely nation turns its eyes to you, Class of 2020, to find that better way,” Hopkins said, in a reference to the Simon and Garfunkel song featured in the occasion-appropriate 1967 film The Graduate. “That’s what commencements are supposed to be about, a more hopeful future.”

Hopkins lamented that the ceremony was not what he had enjoyed as a Class of 2001 graduate. His remarks were recorded under socially distanced conditions — his temperature taken before filming, with lone videographer Alan Larsen manning the camera — instead of amid the traditional pomp and circumstance.

“That’s the greatest lesson I can impart in leadership. Things don’t always go as planned. You usually set out to do something great. Sometimes it happens and it’s magical, but many times it winds up just being you, Alan and a thermometer. Failure, disappointments, setbacks — as terrible as they can be, they mold us into who we truly are.”

Hopkins then pivoted to stories of his own career, highlighting its evolution to remind the graduates that they would likely experience changes while undertaking their own journeys.

In an Anderson tradition, graduates’ name tags adorn the stairs leading into the school’s complex

“It’s not about where you start, it’s looking forward to where you want to finish. In retrospect, and not entirely by design, these three characteristics — resiliency, the value of ethical leadership and taking the long view — were my aces in the hole,” Hopkins said.

“I hope your experiences thus far, along with what you’ve gained here at Anderson, will give you the confidence to take your shot. Tap into that confidence, find your passion and become the leaders of tomorrow.”

After Hopkins’ remarks, the three MBA programs held separate ceremonies, marking a pandemic-necessitated break from the Anderson tradition that saw all graduating programs celebrating together. Iman A. Nanji (’20) spoke on behalf of her full-time classmates, while Shiyu Gao (’20) and Jayvadan Kishorbhai Nanda (’20) repped for the FEMBAs and Jorge Arturo Gonzalez-Rodriguez (’20) delivered remarks for the EMBA program. Dean Bernardo concluded all three ceremonies with the conferring of the degrees.