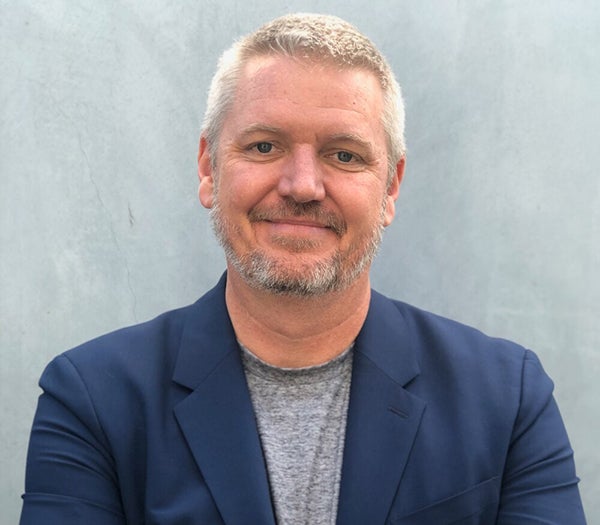 When Professor Sanjay Sood became UCLA Anderson’s faculty chairman, he turned over his role as faculty director of the school’s Center for Management of Enterprise in Media, Entertainment & Sports (MEMES) to Eric Johnson (B.A. ’91), CEO of WON Worldwide, the sports and entertainment advisory firm Johnson founded after nearly two decades as ESPN’s executive vice president of global advertising revenue and sales operations. When Sood needed someone to quickly put together a course designed as a deep dive into the effect of the COVID-19 pandemic on the sports, entertainment and media industries, he again turned to Johnson, whose elective course is one of Anderson’s most popular.

In his new course, Johnson blends the opinions and perspectives he’s developed throughout his career (which began in advertising after he earned an economics degree at UCLA in 1991) with the expertise of guest lecturers he invites to each session. A recent meeting featured sports executive and entrepreneur David Simmons, founder of DESBall Ventures, and Cliff Marks, president of National CineMedia. Preferring a far-ranging discussion to a straight-up lecture, Johnson encourages his guests to share their experience, chiming in with his own points of view. It’s no surprise that class participation features in students’ final grades.

Read the story
Q: Before we get into your class, could you give us the “elevator pitch” on your background?

I worked for nearly two decades at ESPN, the majority of that time as executive vice president of global advertising revenue and sales operations. ESPN had developed a leading entry into every type of media that existed. It was an incredibly gifted seat to sit in because you could see the entire media landscape, you got to see the best-in-class models, for instance, in what cable looks like when it broadcasts. You got to see what trends happened in digital, whether it was mobile or through the desktop. You got to see what other countries were doing and how they were approaching best practices.

I left to start WON Worldwide to work with, invest in and ultimately grow new sports entities that I thought reflected how sports fans are evolving in their consumption patterns.

I don’t know if that was an elevator pitch (laughs).

Q: What’s the genesis of the course?

Sanjay reached out to me and said that he had this idea: “We want to take advantage of teaching a class that really addresses what’s happening in real time to the industry outside of what we read — as entertainment executives and sports fans are enduring [the crisis], what are the decisions that executives are faced with and what’s the impact on these industries, not only in the short term, but long-term opportunities or challenges?” On the sports side, we wanted to get into: How are the leagues and teams managing? What practices are the media companies taking to address an environment of no live sports? How are different countries managing this process? On the entertainment side, what factors are key decisions on releasing theatrical productions under traditional models vs. direct to streaming? How do they see the impact of what theater experiences are going to look like in the future?

Q: How did you pull together materials for the course?

I teach a winter course about the sports media business and overall connections of the sports business industry. How we teach that class is always trying to take into account real-world situations that are going on, but none as urgently fluid and dynamic as this.

At WON Worldwide, I’m essentially working mostly with companies whose worlds all turned upside down in terms of opportunities, quite frankly, because of the COVID situation. So, I’d already been thinking about it in the real-world sense, having to pivot these companies to something that would help them take advantage of new consumption habits already growing, yet accelerate with the right bets on how to grow upon that in the future.

What’s going to be really interesting is that over the five-week course, we’ve started with no set decisions; rather, [we have] to project what will be changing each week. We can begin with the premise of not knowing, for example, if Major League Baseball is going to be able to schedule an abridged season or outright cancel. We might, by the time we get to the end of the course, be watching NBA games that appear in empty arenas. The fluidity is something that is really interesting to the whole class, and to me perhaps the most.

Q: Can you speculate on how businesses might function in a world that is as fluid as the one that we’re dealing with right now?

You’ll have what I imagine are endless scenarios, planned by each of the leagues, that might have to be thrown out seven days later.

What’s interesting is how these leagues think about keeping the games, reaching sports fans and keeping broadcast and other revenues possible. So, what’s the gate revenue’s impact on the teams, how is it managed with leagues if they go to empty stadiums and arenas?

Then they have to think about what next year’s schedule will look like. For a league like the NBA, do they consider potentially changing the start date of the next season? Will the NFL be considering that idea if they can’t start training camps in August so the league can go live in September? Would they shift their season back? And what’s the impact of that on Super Bowl timing or regular season windows?

Q: What are some of the broader themes of the course?

It’s about getting into the economics and understanding the ecosystem. With a global environmental crisis, an impact on one area has a widespread effect on so many different aspects of the sports business. That’s what I want to make sure we’re delving into, because it’s not just how you react to a pandemic, it’s understanding the impact and evaluating the best possible outcomes, including a need to build a new system.

The class that I teach regularly on sports and media has a lot of fundamentals that are absolutely applicable to other areas, not just sports. Sports is the lens through which we look at the media landscape, the digital landscape, league-team structure and the global connection that’s there for certain companies. In this course, I think we can do that across the entertainment space.

Q: How do sports and entertainment companies prepare for a black swan like a global pandemic?

In life, and certainly in leadership, you cannot control everything that happens to you, but you can always control your reaction to any situation.

I’m CEO of a company called Electronic Gaming Federation, which is essentially an intercollegiate varsity-level esports league and governing body. In two weeks, we took our spring plan, which was to host regional in-person tournaments around the country, and we turned it into an exclusively online national tournament. We had 41 Division I universities competing in Rocket League, being streamed on Twitch, Mixer and YouTube. We were talking to the schools directly during the crisis, when they were still trying to get kids off campus. It was a surreal time. They were dealing with much more important issues, but we’re working with schools and saying, hey, we can create some normalcy for these students who are now forced to go home, and this way they can keep their connections with the schools.

Q: Is there going to be anything left of the music industry as we once knew it?

If this issue happened 20 years ago, maybe 30 years ago, it wouldn’t have hurt the music industry to the same degree because most revenues were made of album sales. You toured in order to sell albums. Obviously, that has completely inverted (a great example of what we might see as changing models in media from the pandemic) to where all the money is being made in the touring. What an interesting time to see how models evolve.

Right now, I have not seen a lot of great execution of live music during the pandemic. I’ve seen a lot of attempts that I applaud wholeheartedly, but replicating the quality of a live music experience is challenging with any technology.

On the positive side, with the music industry, is that everyone can be writing and perhaps recording during this window. There may be this musical phoenix that rises from the ashes when this is all done, because artists are able to keep the creative process rolling during this time. They don’t have to be together to do that. It is a different situation than with theatrical productions, which had to halt globally, given safety protocols. How does that industry strategize getting these productions underway post-COVID for releases to be available quickly?

I’m a romantic and an optimist, and I think that we’ll all go back to wanting to do live events, as soon as we possibly can. There may be a silver lining in this for all of us.