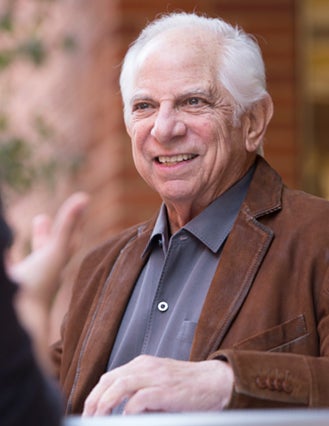 Professor of Management and Organizations
“I’m out to make the world of work fit for human consumption.”
samuel.culbert@anderson.ucla.edu
LinkedIn
Areas of Expertise:
About

Schooled with a B.S. in systems engineering and a Ph.D. in clinical psychology, add in expertise in group dynamics and a consultant’s license to ask people what they actually think, and you get a professor with a way of understanding events and interpreting people’s actions that reveals a good deal that most people miss. That’s Samuel Culbert (Ph.D. ’66), UCLA Anderson professor of management and organizations, and it begins to describe what he’s able to uncover with his research and the insights he provokes with his teaching.

Culbert believes most managers are well-intentioned. But he also sees them immersed in a cultural force field that often has them disoriented — “engaged in actions having consequences they need to be aware of and do more about.” To that end, he’s written several books aimed at informing managers, students and other researchers about what’s taking place and needs revising, efforts that have earned him a muckraker’s reputation.

His research has led him to see trusting relationships as the most important tool any manager has for getting high-quality performances. But when he deconstructs managerial discourse, he finds that straight talk takes a back seat to bullsh*t, which doesn’t promote trust. The findings prompted him to write the book Beyond Bullsh*t: Straight-Talk at Work (Stanford Business Books, 2008), which reveals how bullsh*t has become the etiquette of choice in corporate communications and describes the conditions required for straight talk. SmartMoney Magazine named this book to its 2008 list of 10 top reads, and it was honored as a finalist for the National Best Book Awards.

Articulating the theoretical framework suggested by his findings for the Academy of Management, Culbert was asked about obstacles to managers’ establishing straight-talk relationships with their direct reports — the people whose effectiveness they’re out to enhance. “Easy,” he said, “it’s the annual pay and performance review.” Following up, he wrote a Sloan Management Review paper that was reprinted in another journal, and that sparked a major change taking place mainstream today. What journal has that influence? On October 20, 2008, his paper titled “ Get Rid of the Performance Review!” appeared full-page in the Wall Street Journal. And that led him and his WSJ editor to write an influential management book. In August 2020, the Wall Street Journal published Culbert’s op-ed “How the Pandemic Can Turn Bad Bosses into Good Ones.”

His most recent book, Good People, Bad Managers: How Work Culture Corrupts Good Intentions (Oxford University Press, 2017), focused on exposing “good management reasoning that leads to bad practices in the first place, and the doublethink reasoning managers use to hide the negatives their actions effect — from employees, from cohort managers and especially from themselves.”

Throughout his career, Culbert has creatively welded together three activities: consulting, teaching and writing. Consulting is where he encounters work effectiveness problems in their contemporary forms, demystifies the basic elements and constructs theoretical frameworks that suggest alternative modes of functioning. Teaching provides a forum for extrapolating from problems to issues requiring his investigation. Writing is where he packages his understanding for public consumption.

Culbert is winner of a McKinsey Award for a best article of the year published in the Harvard Business Review, has been a frequent contributor to professional and academic journals, and has authored numerous chapters in leading management topic books.

Samuel Culbert: Bosses Are Accountable, Too

Culbert, S.A., with Rout, L., Get Rid Of The Performance Review! How Companies Can Stop Intimidating, Start Managing — and Focus on What Really Matters, New York: Hachette (Business Plus), 2010.

For three minutes of fun about performance reviews:
http://abcnews.go.com/WNT/video/conversation-performance-review-11126992