It bears repeating that while each economic recession is a little bit different, this one is a lot different. Through the postWorld War II period, recessions have been characterized by downturns in the purchase of goods by households, and by a slackening in housing markets. But today they are not. Consequently, multi-family housing and industrial space remain in the growth portion of their business cycles. The emptying of offices last Spring has now given way to a partial refilling of them this Spring. The palpable urge to return to normal among Californians shows throughout our Survey as expectations for the next three years among survey respondents are decidedly less pessimistic.

Statistical forecast analysis has as its basis the proposition that past statistical relationships hold into the future. A knowledge of those correlations, current data and perhaps some assumptions about data not yet known, lead to the forecast. Today, the ability to use past data to forecast into the future is more limited than before. Nevertheless, the initial response to the opening up of the economy, and the waning of the pandemic in California provide anecdotal evidence and, forwardlooking surveys such as the Allen Matkins/UCLA Anderson Forecast California Commercial Real Estate Survey, taken contemporaneously, can enhance our understanding and projections. The Survey has a rich set of questions such that, taken with the initial evidence, provides for qualitative inference on a turn of commercial real estate from the trough of the recession. 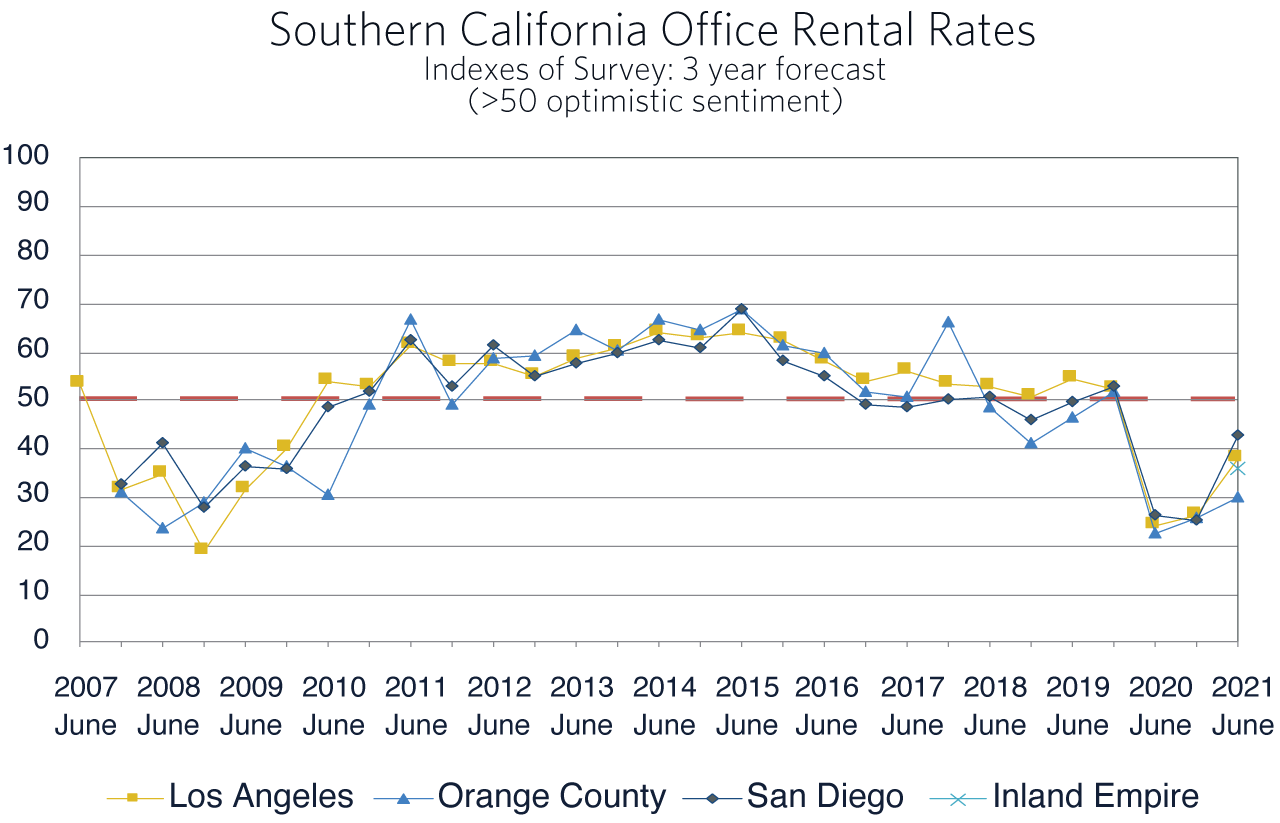 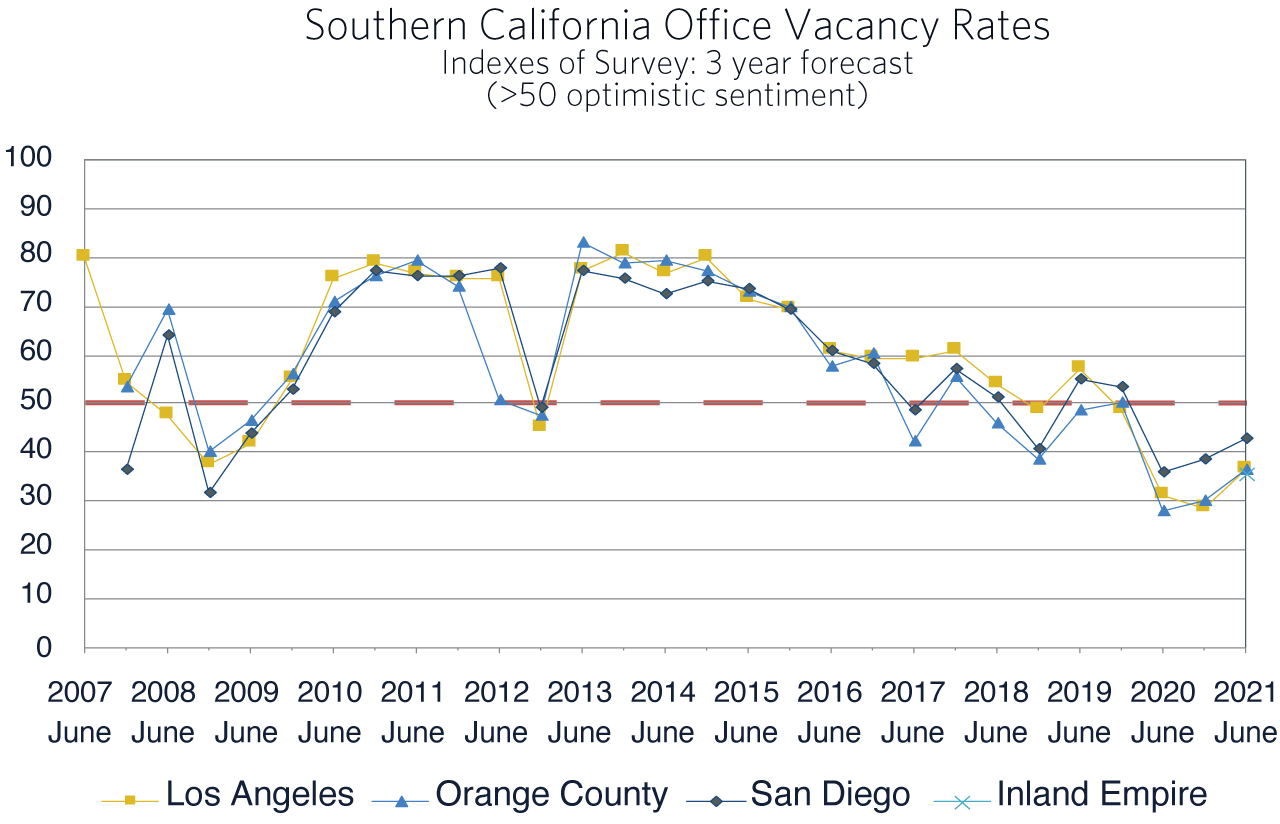 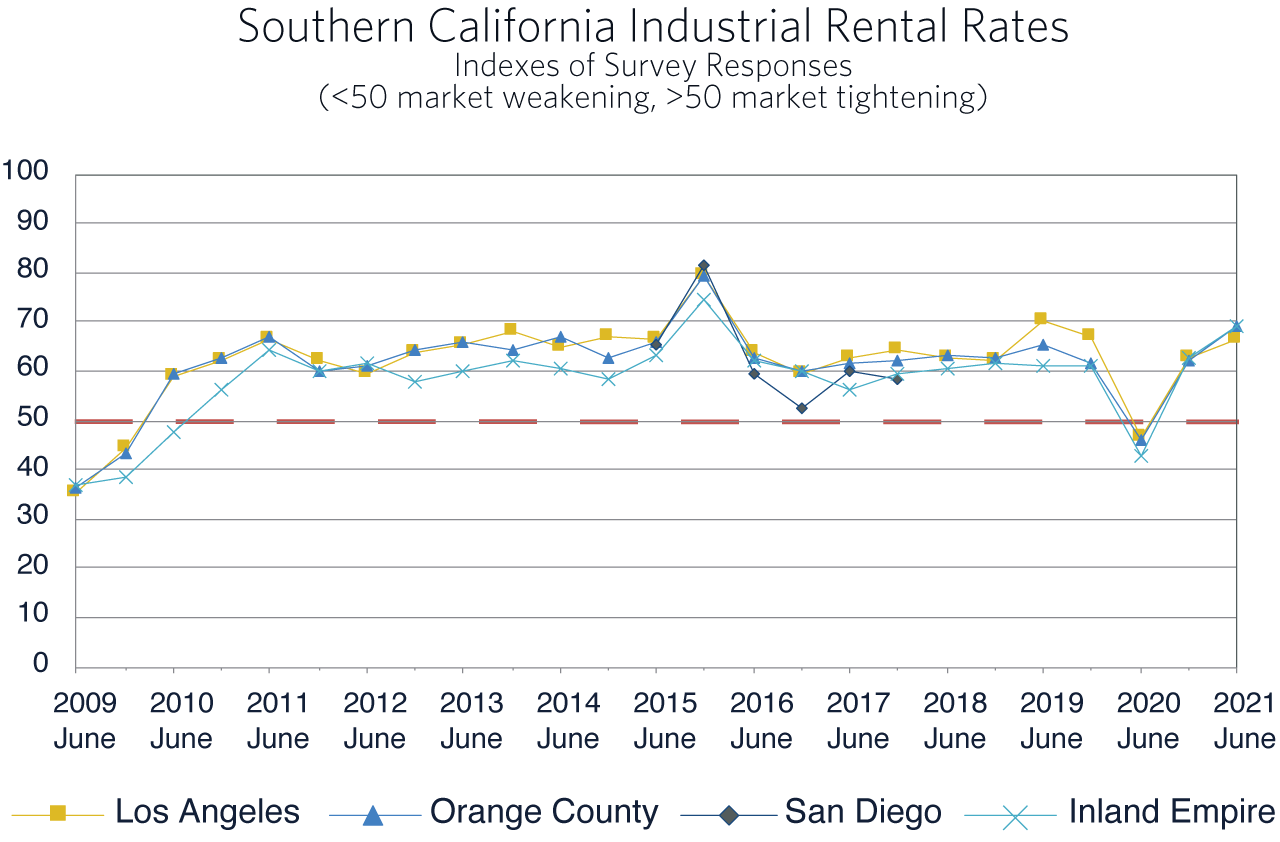 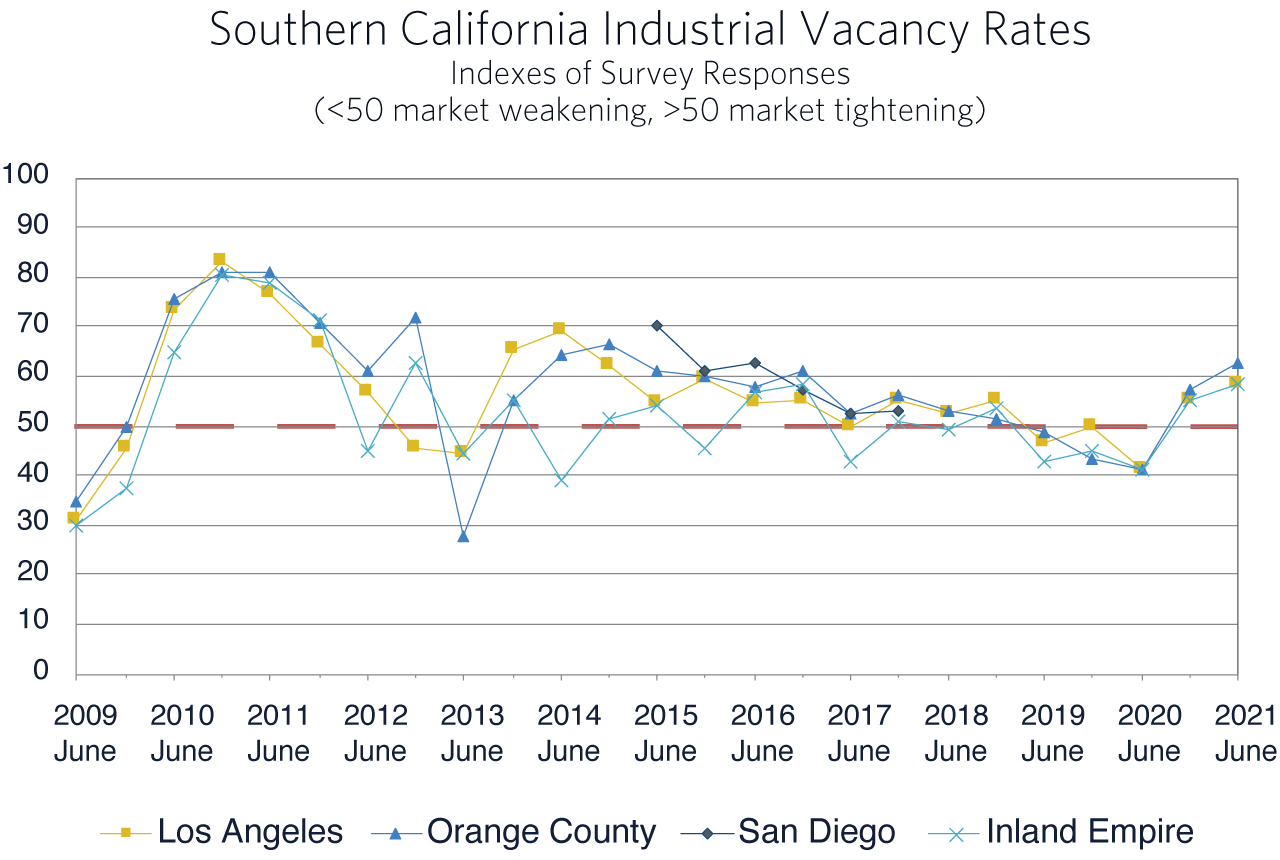 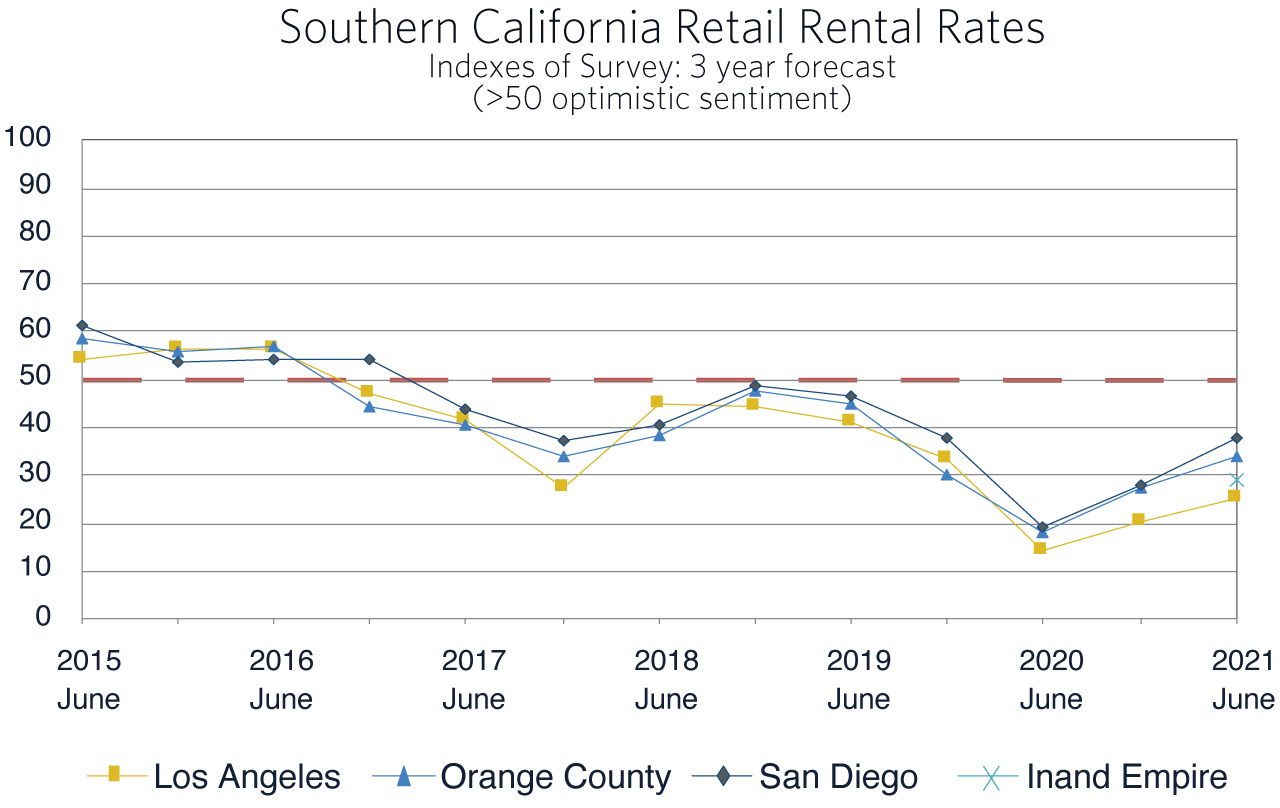 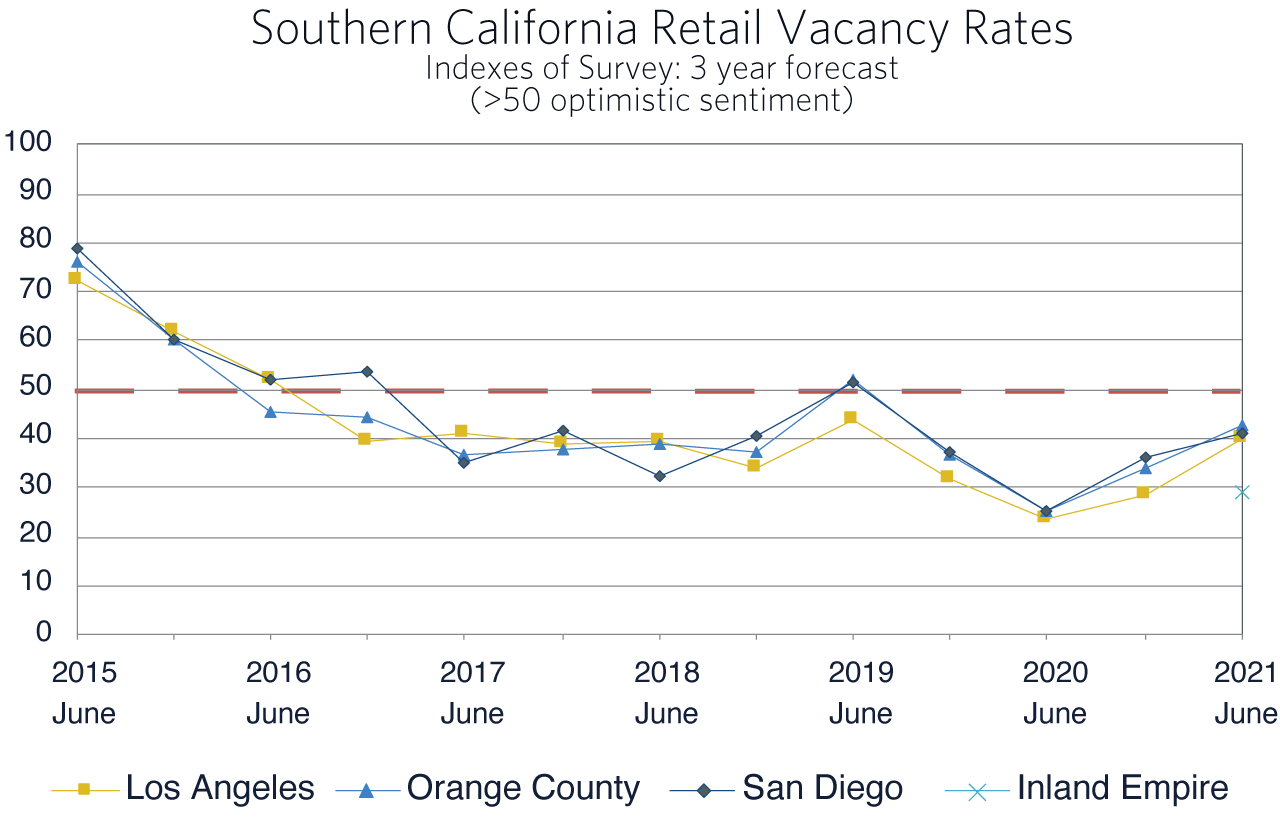 At the beginning of the pandemic the question “what is the future of the office building?” was on everyone’s mind. It is still, and it surely is the money question for all who own or develop office space. What we have learned in recent months is that predictions of up to half of the office workforce being permanently remote will prove to be incorrect. Office-using employment, as it historically has been defined, will undoubtedly increase in the next expansion as technology-intensive industries, healthcare, education, professional and business services, and information services grow. Health safety and the architecture of the office will be important to the first wave of employees now returning. Will the experience of working from home allow firms to demand less office space? There are two countervailing forces. First, some employees might be able to use new technology and be in the office part time, sharing the space with other employees. Second, the ever shrinking space per employee has played out, and firms in their competition for workers will be adding more space per employee. In fact, open spaces, distance, and clean flowing air will all be part of the new office environment. How this plays out in terms of the space demanded in the near term remains unclear.

The latest Survey provides a confirmation that while the above questions are yet to be settled, the recent return-to-office activity has our panelists becoming less pessimistic. In Northern California, our panelists forecast that by 2024 demand will have grown at least as fast as new supply, in part because fully one-third of the panelists have cut back on their plans for new development. In Southern California, panelists‘ views are similar, and 40% have cut back on new development plans. Though the last three Surveys all record pessimism on the part of the panels, the trend towards less pessimism clearly point to the bottom of the current cycle and a turn in the market. The current lull in office construction could be short-lived as the demand for office refitting and low-rise office buildings, and the growth in office-using employment increase over the coming year.

Nevertheless, the headline sentiment remained decidedly negative in each of the seven regions of the current Survey (Chart 1). In Northern California, only 20% of our panelists plan to start a new project in the coming year, up from 12% in the previous Survey, but down from 42% in June of 2019, and in Southern California, 29% are planning on starting a new project, up from 17% in our last Survey and down from 40% in June of 2019. The bottom line from the Survey is that while developers are, on average, still taking a wait-and-see approach, fewer of them are on the sidelines. This provides the aforementioned early signal of a turn in the market. As workers return to the office, the demand for the amenity rich office should push construction and remodeling activity higher than the sentiment expressed in the current Survey would otherwise indicate.

Is retail poised to come back from the bottom of the cycle? The last three Surveys indicate so. For each, pessimism about occupancy and rents three years hence has declined. The employment data (Chart 2) reflects a rebound in retail employment, particularly in the inland regions. Retail employment in the Inland Empire and Sacramento is only a bit more than 2% below the comparable month in 2019. The Bay Area and coastal Southern California, regions more heavily impacted by work-from-home orders, have seen substantial employment gains, but have much further to go. These gains in retail employment have occurred in spite of the increase in pandemic related restrictions put in place December 2020.

The pessimism expressed in the latest Survey is an extension of the trends of the past three years (Chart 3). The current view is that retail properties will be generating lower returns in 2024 compared to the end of 2021. In the Bay Area and in Southern California, two-thirds of the panelists will not be developing any new properties in the coming 12 months (Chart 4). About the same percentage expect difficulty with current leases and expect reduced property values. Thus, while pessimism has declined, an indicator of the beginning of a new building cycle, developers are not yet ready to expand their activity.

While this is not good news for retail property markets in general, it does not mean the absence of solid targeted opportunities. New housing developments, whether they are multi-family or single family, generally require nearby retail. The booming housing market will continue to generate this demand. The more than 1,200 homes being built in semi-rural Elverta (Sacramento County) and 500 in Lake Forest (Orange County) are cases in point. Though the Survey responses on the surface suggest a continued decline in new retail property construction, the trends in the Survey indicate a possible turnaround and a new cycle beginning before the end of 2024. 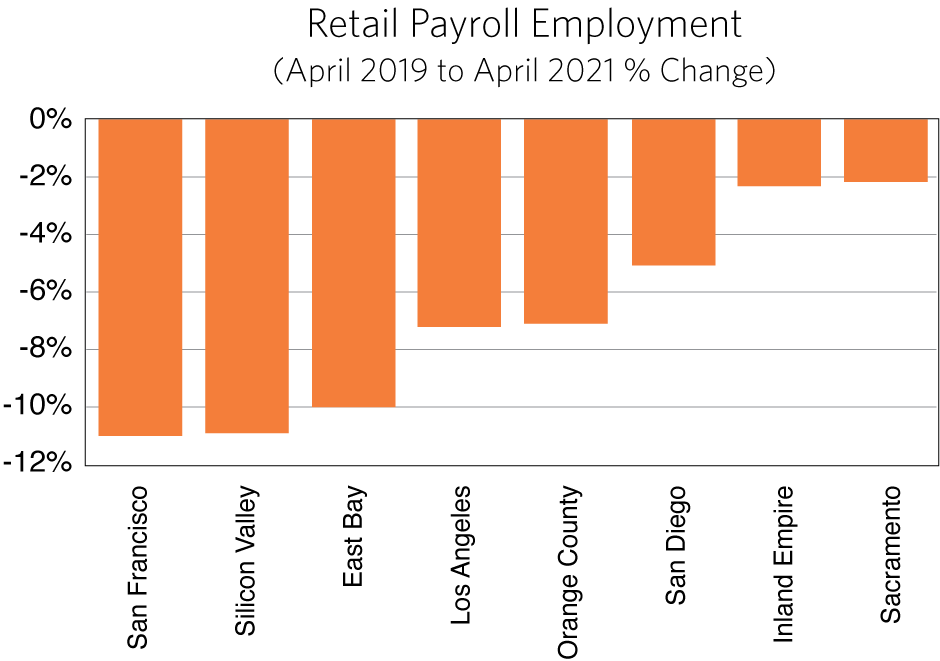 Though the pandemic may have dampened the sentiment of office space developers and investors, the opposite is true for industrial properties. Industrial markets over the past several years have seen consistently high occupancy rates and superior lease rate growth. While sentiment in the June 2020 Survey dropped precipitously in four of the five markets surveyed (Chart 5), it immediately rebounded and has continued to improve. In the latest Survey, overall sentiment about the coming three years soared to its highest level since December 2015.

At the end of April, Los Angeles’ and the Inland Empire’s vacancy rates were under 4.5%, and from Sacramento to the Bay Area between 4% and 7%. In both Northern and Southern California, the developer sentiment indexes indicated the current increase in lease rates would continue to exceed the rate of inflation, and the already low vacancy rates are expected to be even lower by 2024. Behind this sentiment is a view by the panelists about online shopping induced demand for industrial space, and about the expected increase in the stock of that space. Chart 6 shows demand and supply question responses over the past two and a half years. A value over 50 indicates that the panelists expect demand for space to increase faster than the supply of available space. Almost two thirds of the Southern California panelists and half of Northern California panelists plan to begin multiple new developments in the next 12 months. The percentage not planning any new development, either because they have enough in the pipeline or because they have not seen the right opportunity yet is at its lowest level for the Summer Survey in six years.

“With record low vacancy rates that are projected to decline even further, it is definitely an industrial landlord’s market.”

Despite the increased demand for single-family detached homes in the suburbs, worry about work-from-home, and falling rental rates, our panelists are very bullish about the coming three years in the multi-family housing space (Chart 7). Across the board are forecasts for rental rates to increase faster than the rate of inflation, and vacancy rates to fall between now and 2024. This turn-around, predicted by the waning pessimism expressed in the Winter 2021 Survey, has been engendered by two economic forces. First, the success of the vaccine and the diminished risk of the pandemic have resulted in a June opening up of city amenities. These are attractors for city apartment dwelling. Second. the beginning of the return to the office makes it clear that while some remote work will continue through the next few years, the majority of employees will be back. Multi-family housing close to employment centers is an attractive alternative for many to long commutes from the outlying suburbs. In addition, growth in the logistics industry, the State’s increased infrastructure spending and the move to low-rise satellite offices means that the demand for multi-family housing in the inland parts of the state is likely to experience robust growth as well.

Though declining rents surely impacted the business plans for multi-family developers, they have not had much impact on the actual level of building. The reason is that where rents are down, they are down from very high levels. Even after the dramatic drop in San Francisco, the average rental rate for a studio in November 2020 as reported by Bloomberg was $2,100. The optimism from our panelists is very much in line with the firming of rents in coastal California in recent months.

In Southern California, nearly 70% of our panelists will begin one or more multi-family projects this year. In Northern California, that number is a bit under 50%. Clearly the lower rents and higher vacancy rates in parts of the Bay Area are weighing on the panelists and many are waiting to see how the return to the office translates into core city demand.

“Our multi-family markets have steadily maintained a 5% vacancy rate, which means our rents are mounting. In the next three years, it is expected to skyrocket.” 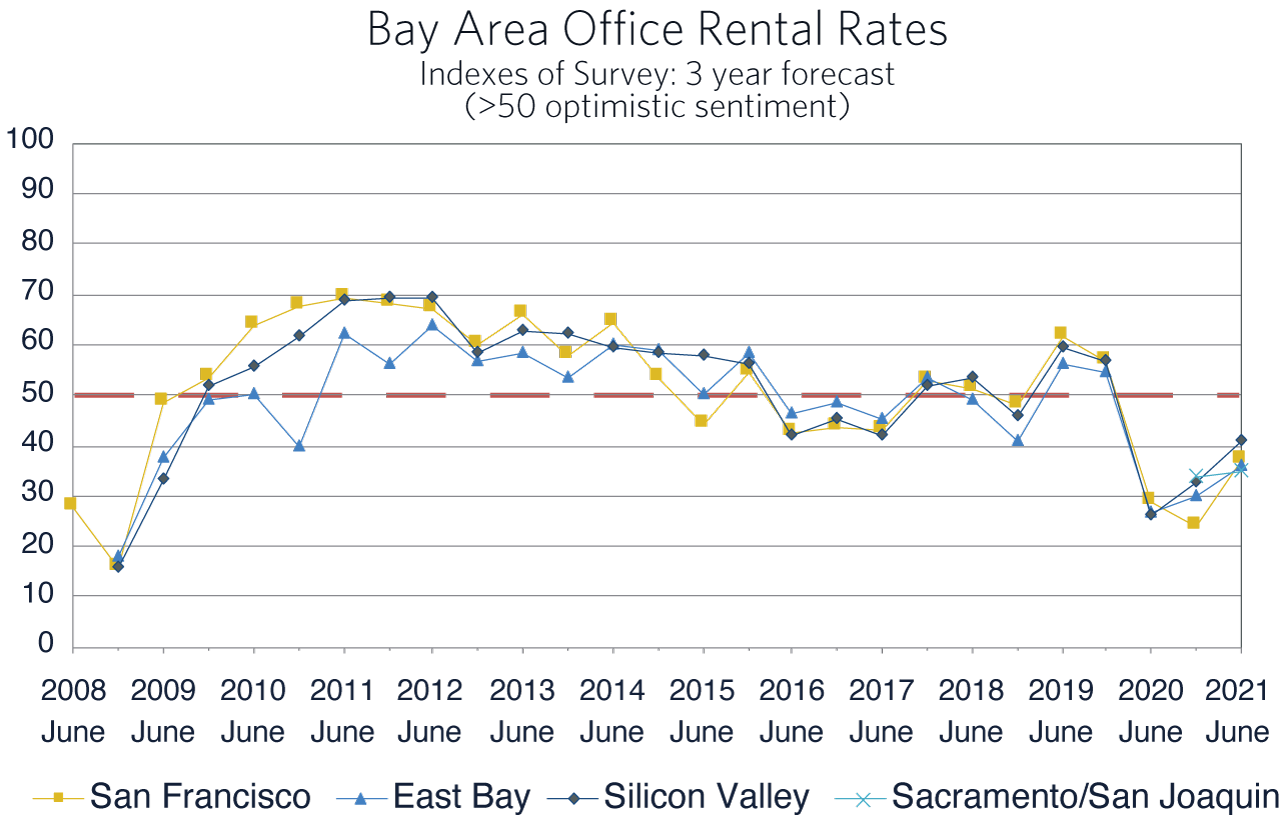 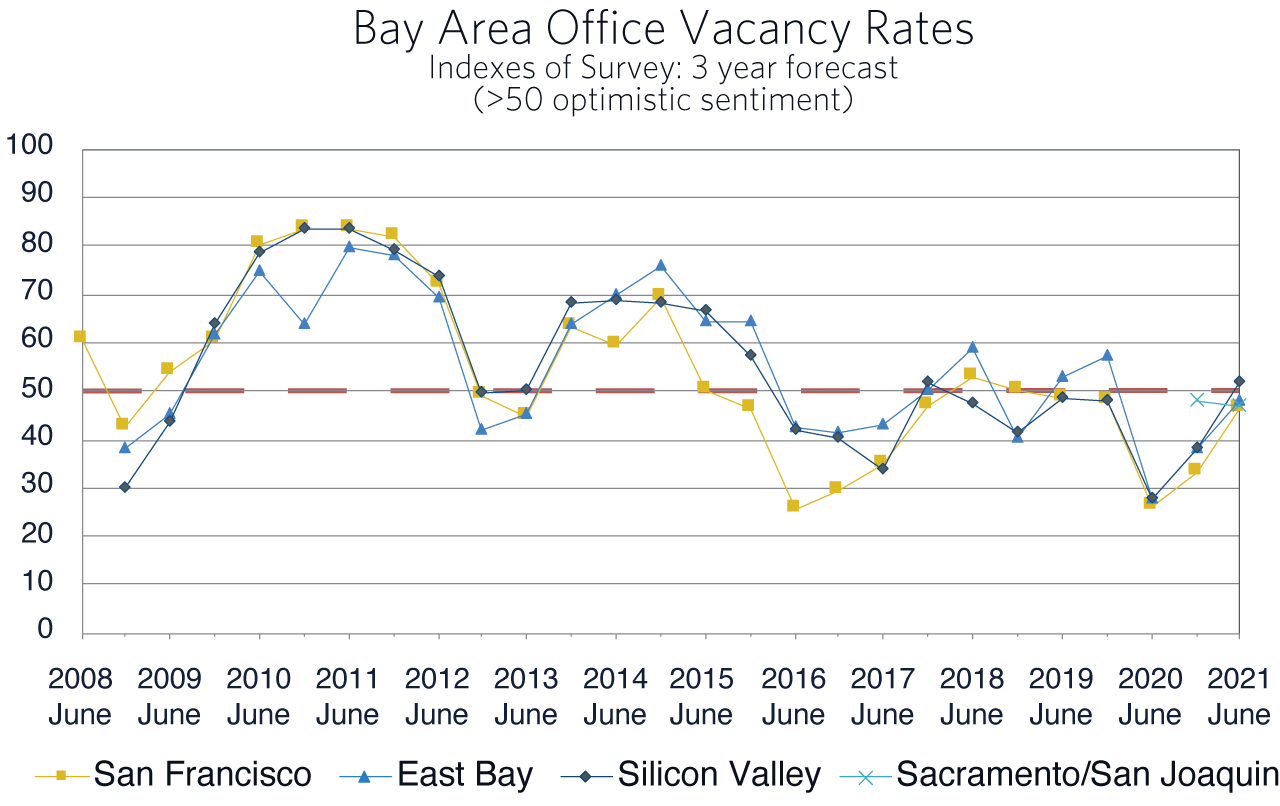 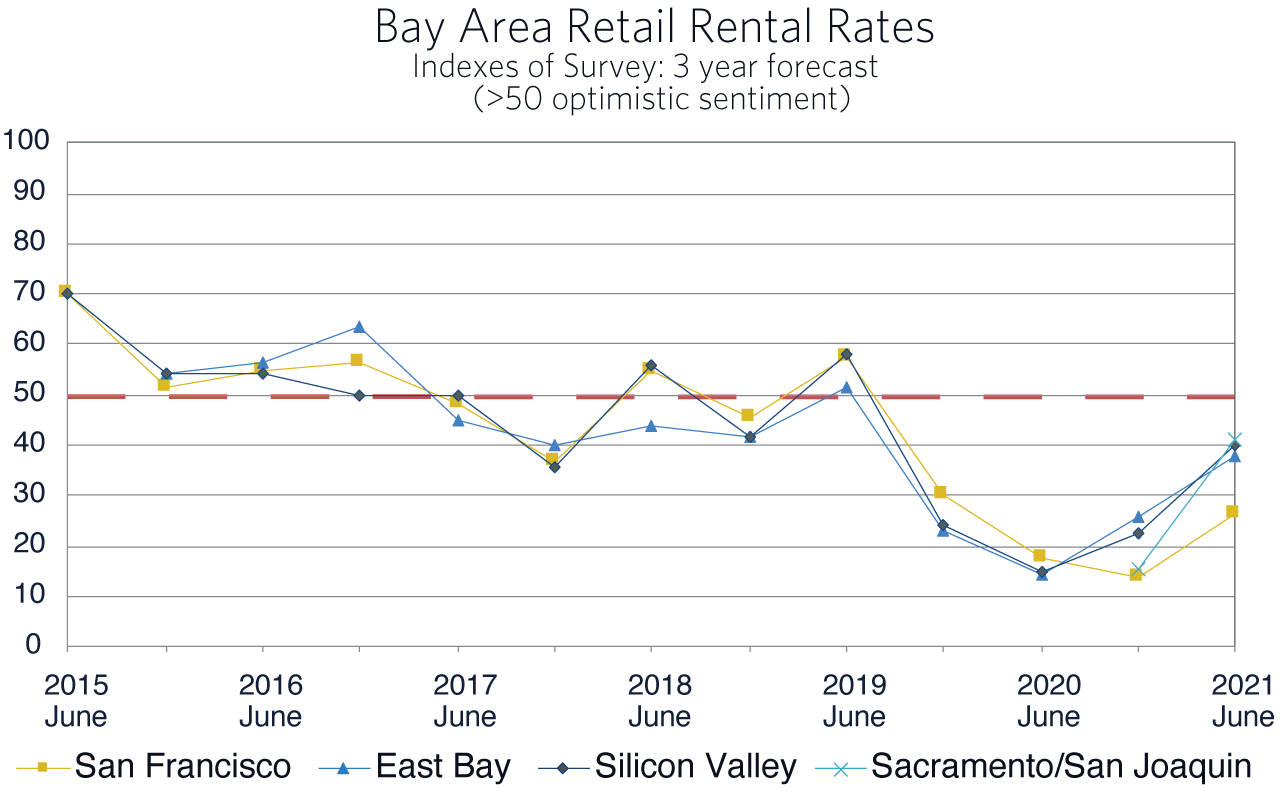 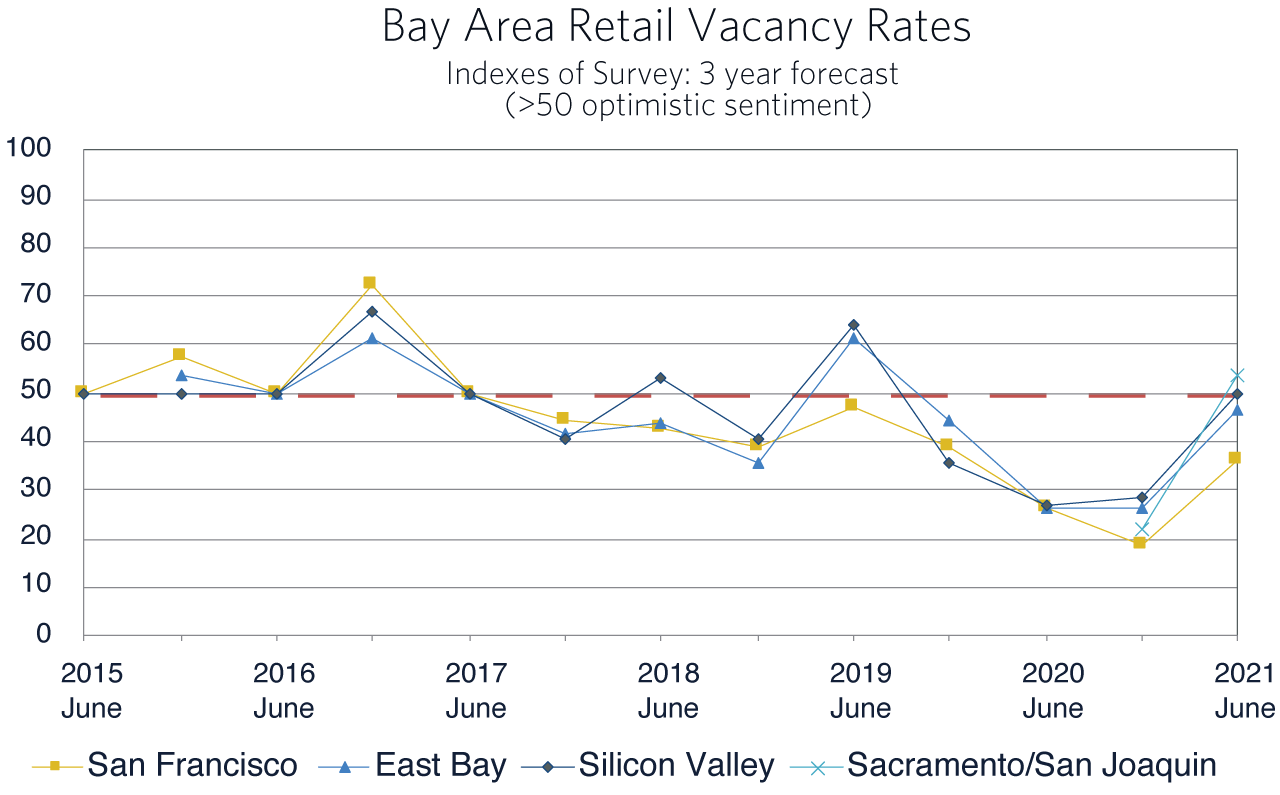 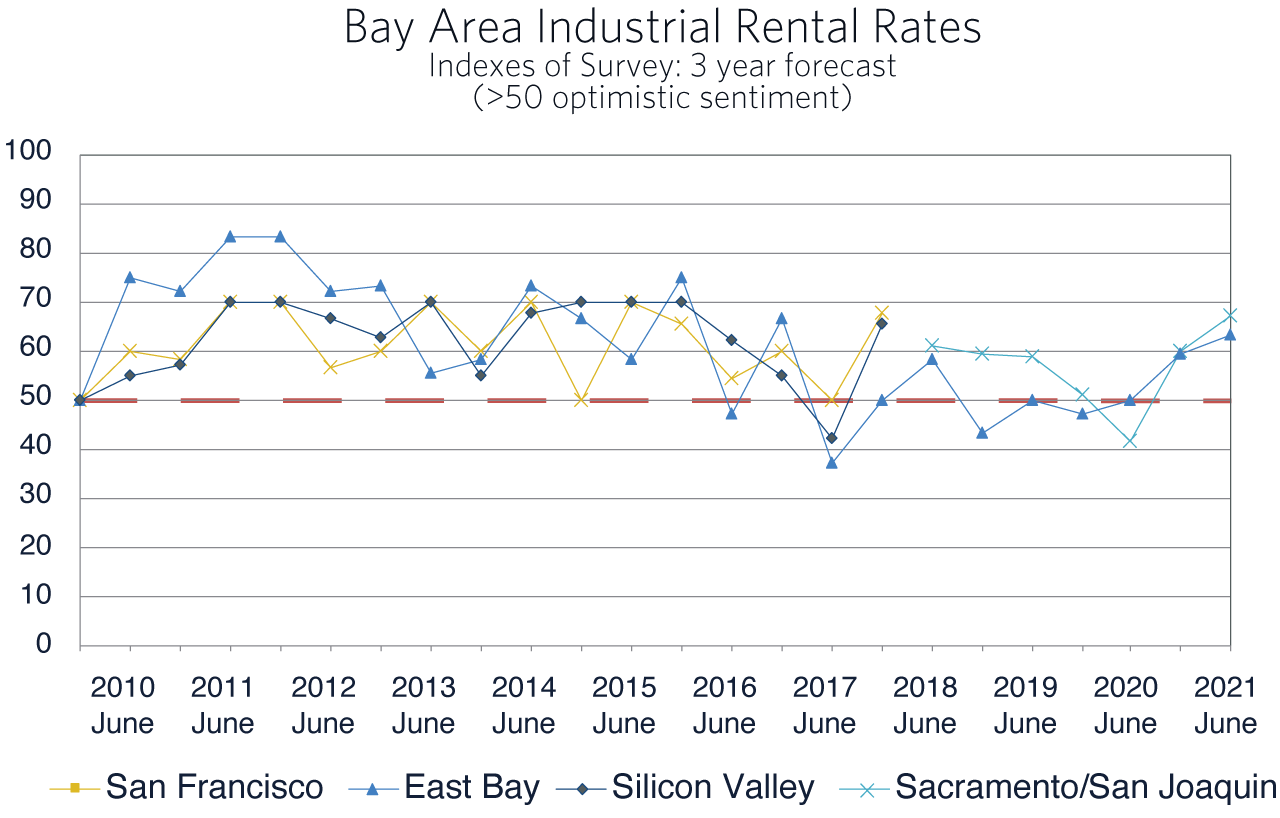 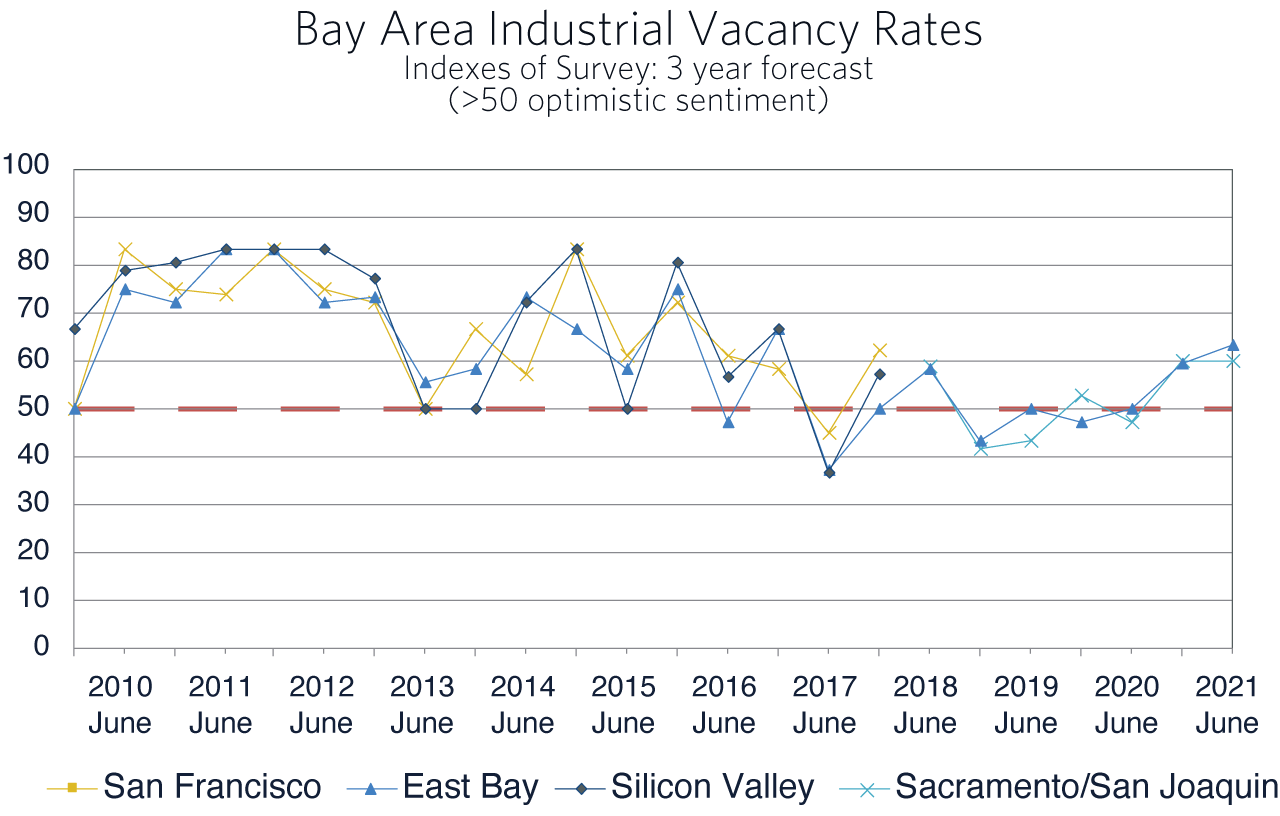 The Survey In Perspective

The Summer 2021 Allen Matkins / UCLA Anderson Forecast California Commercial Real Estate Survey was taken just as the pandemic was beginning to wane in the State and the first steps to re-open the economy were being taken. The Survey respondents were, understandably cautious, but also more optimistic as both we and they see light at the end of the tunnel. Industrial markets, perennially experiencing very low vacancy rates, are poised for a good run of new building and superior returns. Multi-family housing is rapidly bouncing back from a “falling-rent” hiatus and is also poised for a run of new project development. And though retail and office market developers and investors are still in a wait-and-see mode, there are indications of a bottom to the cycles there as well. The small amount of new retail construction, coupled with new housing developments, ought to result in a bottom in brick-and-mortar retail markets in the next year. With offices opening up and the shape of the office taking form through the Summer and Fall, wait-and-see should give way to optimism over the coming year. So, the nascent new CRE cycles appears to be real and foretold by the Survey.

“Respondents were understandably cautious, but also more optimistic as both we and they see light at the end of the tunnel.”