U.S. Army Reservist’s Career Could Be a Movie

On paper, Cindy Perez’s (’23) life and career trajectory look like they were lifted from a Hollywood script.

She began performing as a singer when she was a child in Puerto Rico and Korea. She moved to the Washington, D.C., area with her parents at age 9, and struggled to master schoolroom English. She entered college at 16 and funded her own tuition, in part, by working a job at McDonald’s. She’s now a model, actress and former special agent for the FBI. Meanwhile, she was a captain in the U.S. Army Reserves for more than 14 years.

“I’ve played it as it’s come,” she laughs. “It is kind of poetic and dramatic when you’re leaving it up to fate to bring you opportunities. I’ve had to encourage myself to be ‘justified’ in pursuing these different things. I can appreciate how somebody else might be struggling with that. I want to encourage people to see what I’ve done and say, ‘Why not?’”

Perez attended Park University on the Quantico, Virginia, campus because it was close to home. Her father, a career military officer in the U.S. Army, worked at the Pentagon at the time and had bought a house near the U.S. Marine Corps base in Quantico. She joined the Army Reserves in part because she wanted, as a woman, to do things it seemed like only men on active duty could do. But remaining open to civilian assignments was strategic.

“As far back as I can remember, I went down a performing arts path. I was able to develop my talents in a lot of different environments as we moved around. And I always knew I wanted to be affiliated with the military in some capacity. Did I ever expect to be in the FBI? Absolutely not! I thought it was one of those things like wanting to be an astronaut. It’s ambitious, so the dream seems very far away.”

“Everybody at UCLA wants you to excel. They connect you with other people, they want you to be successful.”

But Perez possesses innate discipline and adaptability that enable her to envision “multiple, seemingly impossible or competing ambitions.”

Her FBI detail had her working in Puerto Rico as well as in the U.S. for a total of four and a half years. She’d done the kind of undercover work the FBI calls a “cameo” and, in the process, made her superiors think she had either done it before or was a professional actor. She had a knack for working off others’ emotional cues, which helped in environments where she had to go along with something that was happening without giving herself away. She says it felt natural to segue into theatrical projects. The way Perez sees it, the FBI, military service, the corporate world, academia and entertainment have a lot in common.

“We’re all in the business of people,” she says. “Everything is about your personal connections with people. It’s about serving other people and their emotional needs. Acting is about creating an environment where people relate to you and know that they’re not alone in the world. You’re taught not to act, but to react to what somebody is telling you.”

Following her resignation from the FBI, her acting career began to take off in Utah, of all places. Just since 2017, she has appeared in short and feature films, television series, commercials and print ads, including in uniform in Panasonic’s Women in Tough Jobs campaign. That boost led her to Los Angeles — where she arrived a few months before pandemic lockdown.

Well before COVID-19, Perez’s native Puerto Rico had been literally hit with one of the worst natural disasters in its history. Perez and her family have always embraced a sense of service. In 2017, her father had retired after more than 35 years in military service. He and her mother, a Spanish language teacher who had taught in both Korea and the U.S., turned their attention to the devastating wreckage of Hurricane Maria. And this would lead to Perez’s next career shift.

The Perez-Lorenzos launched the nonprofit Stronger than Maria with the basic goal of providing immediate assistance. “My parents were boots-on-the-ground from the beginning,” says Perez, who, with her brother Kenny and extended family members, became involved. “It grew so fast. The more we progressed, the more our goals expanded.”

“As Hispanic women — as women — we’re not just one-dimensional. That’s what I would like anybody to understand from my story, that if I can do it, anybody can do it.”

Since its founding, Stronger than Maria has funded repair and construction of 519 homes for Puerto Ricans displaced by the hurricane and distributed 8,000 pounds of food and water. The organization partners with companies and NGOs all over the U.S. and facilitates their direct work with island communities to arrive at manageable, sustainable solutions that people want to pursue, like growing food in a home garden. And augmenting sustainability of structures with solar power and cisterns will enable homes to endure in the face of climate change.

As Perez explains, “If we’re going to rebuild from scratch, let’s make these homes self-sustaining. We choose resilient building materials and install water filtration systems. These homes can withstand a natural disaster and self-sustain in the weeks after.”

The Perez-Lorenzo family recently launched Somos Puerto Rico to showcase the work of local artists and craftspeople, with the mission of promoting emerging talent as well as generating proceeds to benefit the nonprofit.

The Somos Puerto Rico effort is what persuaded Perez it was time to get some formal business knowledge under her belt. She says the timing was perfect, and that Anderson afforded her the ideal opportunity to connect with a network of professionals whose reach encompassed nonprofits, social enterprises and industries ranging from finance to entertainment management.

“I absolutely love the program,” she says. “I considered a lot of schools, and I didn’t apply right away. Instead, I approached individuals to have one-on-one conversations about the admission process, what classes looked like and, more specifically, what the class diversity was going to be like — not just in terms of students but also in terms of faculty and the school’s overall mission. Once I talked to UCLA Anderson, it was a no-brainer.

“UCLA could be very elitist. It’s quite the opposite: Everybody at UCLA wants you to excel. They connect you with other people, they want you to be successful. I’m so grateful to be attending a recognized institution that doesn’t have a superiority complex.”

At the start of National Hispanic Heritage Month in 2021, just as she was embarking on her MBA, Perez shared a post via LinkedIn, writing: “I never thought I’d go back to school. I’d have dreams of attending top-rated programs, but thought, for me, that was impossible. Memories of my early years in this country took over my judgment and I’d once again put that idea on a shelf.”

Puerto Rico is like the U.S.’s middle child, explains Perez. “Everybody knows we’re there, but we don’t necessarily get a lot of attention. There’s a sense of belonging yet not completely being a part of the family — but still expected to keep up.

“One of the things that drew me to the program was that it’s never very industry-heavy in any one place. One of the main reasons I sought my MBA was to expand my network and get to know different types of people and learn how they became successful in their fields. I can parlay those lessons in the nonprofit sector or even into my acting career.”

She plans to draw on her military experience as well, observing that today’s scripts don’t always nail it. “In an effort to portray women in law enforcement or the military as strong, Hollywood depicts them as emotionless and stoic, stern and strict, and devoid of the complexities and richness that I personally know these women possess. Movies give women thinly veiled backstories of childhood trauma to explain why they went into tough work. 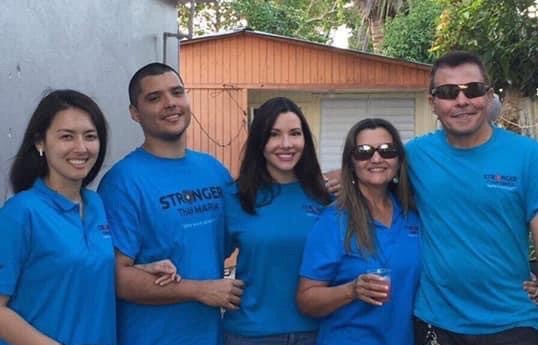 Cindy Perez (’23) (center), vice president of her family’s nonprofit Stronger than Maria, with her parents and brother and sister-in-law

“The reality of it is, we join because we believe in public service and a cause greater than self. We struggle between what society thinks we should be like in the office and what we should be like as partners, mothers, daughters and friends. We wrestle with our mental health, the timelines of motherhood and what it means to our physically and mentally demanding careers. We are not emotionless, and that is, in fact, what makes us incredibly adept — our indispensable ability to read and relate to people. That’s where the real strength is, that’s where the story is and what we need to see more of in Hollywood.”

But Perez is entering an arena that demands flawlessness. Is she prepared to live up to the current standards of the entertainment industry and still be authentic and flawed? “You start by identifying what your platform is going to be. You start by believing your message is important. I know what I’m willing to do to get my message across. Partnering with people who demand that kind of flawlessness — that’s not going to be for me. The more I talk to people who might be interested in my story, the more influence and support I’ll have — we will have — to change the standards.

“As Hispanic women — as women — we’re not just one-dimensional. That’s what I would like anybody to understand from my story, that if I can do it, anybody can do it. Anybody is free to develop and pursue passions.”