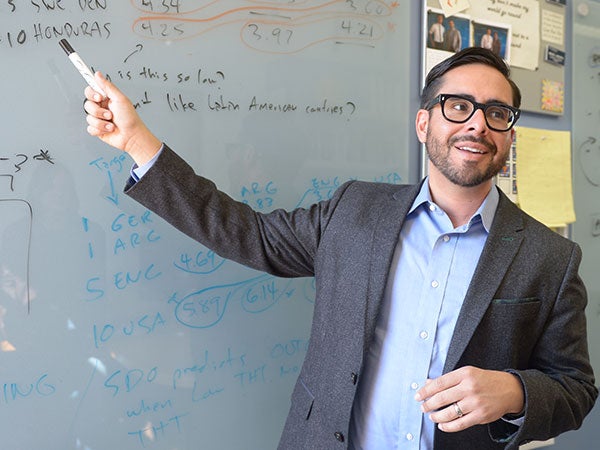 Professor of Management and Organizations Miguel Unzueta studies diversity, bias and discrimination. His research explores how people and companies define diversity and the influence contemporary diversity definitions have on the representation of women and racial minorities in organizations.
Share this article:

The Steinmetz Formula Works for Two Generations of Bruins

In the classroom, Unzueta leans into the psychological behavioral elements of negotiation. He focuses his Negotiations Behavior course on practice. His goal is not to teach students how to “win” every negotiation, but rather to identify what they want out of negotiations to achieve their goals, as well as to know when to walk away.

Q: What can you tell us about your course on negotiations behavior?

It’s a very practical, hands-on, activity-oriented class in which students get comfortable with the ritual of negotiation. I try very hard to convey to students that even though a lot of people associate conflict with negotiation, at the core of it, it’s really problem solving that’s the key skill. There will be conflict in negotiations, don’t get me wrong. But when you think that it’s all conflict, that’s how you become averse to negotiating and standoffish in your negotiation style. It’s really about problem solving, two parties trying to figure out how to distribute resources in ways that solve their problems. The empowering thing about that is, once you switch your thinking about negotiation to problem solving, as opposed to conflict and aggression, you realize there’s way more room for just engaging in a way that isn’t toxic.

There’s quite a large literature on negotiation best practices. I try in this class and in all my teaching to give students research-based recommendations. I assign a book called Getting More of What You Want by Maggie Neale, who is a professor and psychologist at Stanford. She wrote it with Thomas Lys, an economist. The classroom exercises are all about practice.

Q: What about assignments?

In every class, students actually engage in a mock negotiation, where they play the role of a buyer or seller, or employee or employer. Then, we debrief that negotiation afterward. What’s cool about that is, we’re able to actually see everybody’s results. You’re able to compare yourself to how your classmates [negotiated]. It’s really hard to know how well you did as an individual until you have that sort of comparison. That helps students gauge which aspects of their negotiation style need to be worked on and changed.

The final assignment is really simple. Students have to take all the lessons from the in-class activities and all concepts from the books, readings and lectures and then take those ideas out into the world and negotiate something for real. If a student has a job offer, great. They can use their job salary negotiation as the final project. If they happen to be buying a house or a car, that’s great timing. I’ve also had students negotiate things that normally aren’t thought of as negotiable.

Students try to negotiate parameters with in-laws in terms of coming to visit newborn babies. I had a student negotiate the way that she and a neighbor were going to share dog raising responsibilities. One student thought he was engaging in a job salary negotiation with an employer. It turned out, though, that in order for that offer to be accepted, he had to make sure his wife was on board. So, that negotiation very quickly became two simultaneous negotiations. It turned out that he also needed to address his wife’s underlying concerns about having to leave California. That became a really interesting negotiation because he realized all these things were intertwined.

Q: Are the students evaluated on results or process or both?

I don’t grade negotiation outcomes because I want students to feel free enough to try different strategies that they might not be comfortable with. Sometimes you try things that don’t work. I don’t want people to feel punished for trying something new.

In the debriefs I ask students who come up with interesting deals to talk to me about what the back and forth was like, what the strategy was like, how the communication happened. Did you take the time before you put out an offer to try to understand what problem the other side was trying to solve? And did the other side try to figure out what problem they were trying to solve? Did you ask enough questions before you actually put out some numbers to try to figure out how both sides can benefit from a negotiated outcome here? So, it’s not really about who won or who lost. Rather, did you go through the right process to give yourself a chance to actually create value before you claimed that value?

Sometimes a negotiation blows up. Sometimes you just can’t get value out of a negotiation. That’s okay, as long as you’ve gone through the right steps. The idea is, if you go through the right preparation and you take the right approach in negotiations, you will do much better. One thing I always emphasize is that the point of negotiation is not to get deals. It’s to get good deals and if you have not done enough homework or research to understand what a good deal looks like, then you shouldn’t be negotiating at all.

Q: Without giving away the course secrets, any negotiation tips for our readers?

What’s a good one? I would say, in order to get into the problem-solving mindset, what’s really important is for you to ask enough questions of your counterpart to understand why they are there in the first place. What problem are they trying to solve by negotiating with you? If you ask those kinds of questions, you realize there are things they care about that you can give them that are relatively cheap to you, things you can give up in exchange for something that is actually valuable to you. When this works really well, those trades make sense. That’s the basics of value creation in negotiation.