Now the alumnus supports the school in multiple ways and will be honored with the 2019 John E. Anderson Distinguished Service Award

Joel Fried (’86) has a message for newly-minted MBAs who might be interested in working at a firm like PRIMECAP Management Company, where Fried has spent the entirety of his career.

“We look for raw, intellectual horsepower,” Fried says. “We look for curious people who are passionate about something, who are hard working and most importantly, are nice people. In this business, there are a lot of difficult times and so when you’re in a bunker you want to be surrounded by nice people.”

“I love talking with the students and hearing what's on their mind and what they think about these days, what's important to them. I love chatting with the faculty and seeing what research they're working on. It's all really fulfilling.”

For those accustomed to the media’s oft-portrayed stereotype of cut-throat financiers, the emphasis on “nice” might come as a surprise. But for Fried, it’s not only an essential quality in a colleague, it dovetails well with his sense of the UCLA Anderson community. Fried recently hosted a dinner for prominent alumni and guests were asked to introduce themselves, with one describing why she went to Anderson.

“She said her perception of Anderson was that the students were extremely bright, extremely ambitious, but extremely grounded and balanced. They were of high integrity and great character and she really enjoyed being around them,” Fried says. “I thought she captured it perfectly. I could not agree more with that statement. That is my image of Anderson.”

Fried currently serves as president and portfolio manager at PRIMECAP, an investment firm that manages institutional equities. The company has three businesses, managing several mutual funds for the Vanguard Group; several mutual funds under its own moniker, the PRIMECAP Odyssey Funds; and a number of separate accounts including pension funds, endowments, foundations and sovereign wealth money. Fried’s primary role is as one of the portfolio managers for all of the funds that PRIMECAP manages. As president, he plays a role in running the firm as well, a responsibility he shares with other senior executives. “That,” he says, “is a much smaller part of my time.”

Fried’s devotion to his alma mater – he is a “double Bruin” with a bachelor’s to go with his MBA — manifests in the way he gives back. Fried serves on multiple UCLA Anderson boards, including the Board of Advisors and the Fink Center for Finance and Investments. He’s spoken to various classes, hosts the Student Investment Fund at PRIMECAP’s offices each year and delivered the keynote at the school’s Stock Pitch Competition. Fried also supports the school financially, with multiple gifts, including one that created the Joel Fried Chair in Applied Finance, currently held by Professor Antonio Bernardo. “It’s truly a great honor,” says Bernardo. “I couldn’t be prouder to hold the Joel Fried Chair. I’ve had a great career here and this is a great capstone.”

“I've tried to help out where I can. I really do enjoy being an advisor. (Former Dean) Judy (Olian) is a good friend, (Interim Dean) Al (Osborne) is a good friend (and) I think I've been helpful in some of the insights I've given,” Fried says. “It's interesting to me. I love talking with the students and hearing what's on their mind and what they think about these days, what's important to them. I love chatting with the faculty and seeing what research they're working on. It's all really fulfilling. 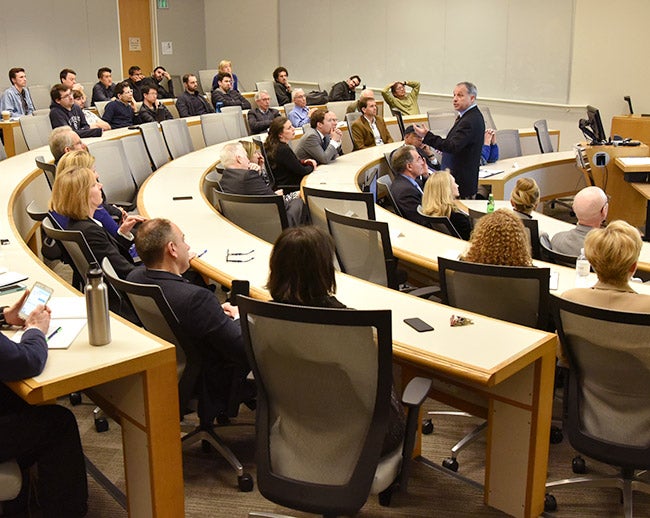 “I've been blessed to have been in a career and with a company that's been very financially remunerative and so I'm in a position to give back and I do think that giving back is an obligation,” Fried says. “Anderson took a chance on me -- I came straight out of undergrad at a time other elite business schools would not take someone straight out of undergrad so I've always been grateful. I have no doubt it was the experiences I had at Anderson and the degree from Anderson that opened doors for me (and provided an) opportunity to succeed that I wouldn't have had otherwise.”

Fried also points out that tuition was just $1,500 a year in his day and says he's glad to be able to play a role in offsetting costs for MBA students today by endowing student fellowships. Equally important, he says, is helping the school compete with peer institutions, not to mention private sector companies, for top faculty talent.

Now, UCLA Anderson is honoring Fried with the 2019 John E. Anderson Distinguished Alumni Award. The award is the highest accolade for exceptional achievement that UCLA Anderson bestows upon an alumnus, saluting the achievements of outstanding alumni whose personal lives, professional achievements, and community service exemplify the objectives of their alma mater.

“I know many of the past recipients. They are an extraordinary collection of individuals, what they have achieved during their careers. To be included in this group is humbling. Through my various involvements at Anderson, I engage with other board members, I engage with faculty, I engage with alumni and students. Collectively, these different constituents are some of the most impressive and highest-integrity people I know. To be recognized by a community like this, it's just a great honor,” he says.