How Entrepreneurs and Startups Can Quickly Take Flight:
A Peek Inside the UCLA Anderson Venture Accelerator

The UCLA Anderson Venture Accelerator maintains strong ties to the legacy of the late Gerald Loeb, an innovative solutions seeker

The UCLA campus in the Westwood neighborhood of Los Angeles is immense. So as you walk toward the UCLA Anderson School of Management’s south entrance, why does it feel like your field of vision suddenly narrows?

Stand in front of Anderson’s circle of four interconnected buildings and your eyes might focus on a small rectangular window of sunlight, shadows and trees. Two sets of concrete staircases on the bottom — plus brick walls on the left, right and top — frame that view.

In a word, the Anderson Venture Accelerator seems to put focus above everything else.

Talk with the staff of the Accelerator and the resident entrepreneurs, and you’ll quickly understand that the school will do whatever it takes to put startups on the path to speedy progress on campus and long-term success off-campus. 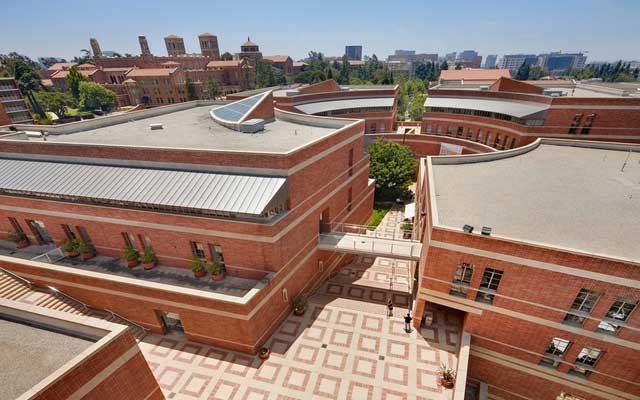 Anderson’s six-building complex is connected by a series of pathways and bridges, together comprising more than 284,000 square feet of classrooms, lecture halls, study centers, courtyards and creative spaces

According to Trish Halamandaris (’92), the program’s director and an alumna of UCLA Anderson, the Accelerator houses 10 to 12 teams, or cohorts, each six-month period. Coupled with the cohorts are MBA-led startups that focus on experiential learning. The program has four end goals: selling the company outright, reaching a state of self-funding, receiving a seed round of venture capital funding or entering another accelerator, such as Y Combinator or Los Angeles–based Amplify.

In May 2018, Accelerator alumnus and Quantvex co-founder Shang Chou (’16) succeeded in selling a majority stake of his fintech firm to Hatton Consulting. Quantvex specializes in digital engagement for the wealth management industry.

Consumer goods company KPOP! Foods, headed by UCLA Anderson grads Theo Lee (B.A. ’11, ’17) and Mike Kim (’17), is currently funding itself by selling an average of more than $11,000 per month of its gochujang-inspired hot sauce and Korean-style roasted seaweed snacks on Amazon.com.

“We are running at a success rate above 50 percent,” Halamandaris says. “My job is to make them succeed or fail fast, and if they fail, to pivot.”

At a March 25 welcome reception for the Loeb Awards preliminary judges, Halamandaris, Accelerator program manager and UCLA Anderson grad Janet Chung (’18), and other staff made sure that five Accelerator teams took full advantage of a rare opportunity to communicate and share business ideas, products and strategies with the top business writers and editors who arrived from all parts of the country.

UCLA Anderson faculty members also attended the reception, which took place at a private residence in Beverly Hills. Amid sweeping views of the Pacific Ocean and the Santa Monica Mountains, the students put on a fashion show, handed out barbecue brisket, demonstrated innovations in technology and answered questions on their current businesses and goals. “The Accelerator teams need to practice how to be in front of the media, how to communicate what their company and their products are about,” one UCLA Anderson staff member commented. “We wanted to give them a tactile experience and let journalists see what the teams can do.”

The late Gerald Loeb, both an investor and writer, also gave feedback to companies who sought to create new products. The radio company Philco asked for his opinion on the design and marketability of a portable radio that resembled the human ear.

Loeb had known Philco’s finances and management intimately, according to author Ralph Martin. Loeb’s response? “Loeb said that while the idea might have some artistic merit, the product would not fit into the furniture scheme of most homes,” Martin wrote in his 1965 book, The Wizard of Wall Street: The Story of Gerald M. Loeb. “Loeb proved to be right.”

Venture accelerators also exist in the San Francisco, Berkeley, Santa Cruz, Irvine, Davis, Santa Barbara, Riverside and San Diego campuses of the UC system. But the Anderson Venture Accelerator, in addition to its strong ties with the Loeb Awards, stands out from the others.

Start with the 10,000-square-foot facility in the basement of the business school’s Rosenfeld Library. In addition to meeting rooms, a pitch deck, a kitchen and eat-in space, and small booths for phone calls, the Accelerator features a 4,000-square-foot co-working space for teams.

Experts from the tech, PR and marketing, and legal industries hold seminars and office hours there on a regular basis. The Accelerator’s Entrepreneurs-in-Residence help startups sharpen their business pitches, marketing strategy and business modeling.

“We curate a successful set of alumni who had successful exits and have gone through the ups and downs of business,” says Halamandaris, a former marketing veteran at Amazon.com. “The Anderson motto is ‘Excellence without attitude or pretense.’ It’s true. It’s a very collegial atmosphere.”

The 24/7 access to this co-working space is a rarity on campus, Halamandaris says. It underscores the unusually high level of trust given to the startup teams.

It also leads to what one startup co-founder calls “serendipitous run-ins.”

Ray Christian, CEO of Textpert, once spilled some cold-brew coffee on himself while literally bumping into an Anderson graduate and founder of another company. Now the two are in talks regarding possibly forming a joint venture.

“Our network of connections has exploded,” Christian says. Textpert uses artificial intelligence and a massive database of video interviews to build an objective, fast and precise tool to assess opioid abuse risk. Textpert analyzes speech content, facial expressions and “vocal prosody” to determine who’s at high risk. Such information can be vital for insurers and health care providers to decide on patient care alternatives. The Centers for Disease Control and Prevention reported that prescription opioid dependence, abuse and overdoses cost the United States $78.5 billion in 2013 alone. Christian hopes he and co-founder Ezekiel Victor will establish what will be known as the “MRI for addiction risk and mental health.”

Christian knows the connection between mental health and opioid abuse well. After having to drop out of college because of an autoimmune disorder, he became depressed and became addicted to sleeping pills for 10 years. He eventually recovered, worked at corporate giants Marriott and KPMG, and founded a company that trains job seekers how to excel at interviewing.

“The leadership team, and especially Trish, is incredibly adept at facilitating introductions. The space is unequivocally delightful for creativity and focus,” Christian says. “There’s also a certain je ne sais quoi in being able to say we’re working on campus. It’s kind of a market validator when reaching out to potential clients and investors.”