The Art of Analytics

Our Footsteps Cover the Globe

Like so many parents, Henry Brandon’s (’89) father dreamed his son would become a doctor. Himself an engineer, the elder Brandon believed Henry’s affinity for math and science suggested a career in medicine. When the son, Henry Brandon III, entered Stanford, he pursued coursework in human biology.

Though he is just a completed-thesis short of a degree in human biology (a course of study that included the prerequisites for medical school), Brandon ultimately earned his undergraduate degree in economics. “I just didn’t want to be a doctor,” Brandon says. After graduating, he played professional tennis for three years and coached for two more, then embarked on a career in business. 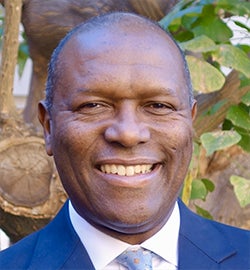 Henry Brandon III (’89) is a senior executive strategic thinker and leader in the investment management industry. Following an early career as a professional tennis player and coach, Brandon has applied his business expertise in the arenas of private equity, venture capital, asset management, equities, capital markets and banking. As a guest lecturer at UCLA Anderson and Harvard, he has inspired future MBA students in the Riordan Programs.

“As I was out working in the business world, I realized how little I knew about the markets and about running a business. And the little I knew I learned through my jobs in retail,” says Brandon, who is chief operating officer and partner at Nile Capital Group. “But I just felt like there was more out there. As I read about people going to business school, I decided I wanted to take that plunge.”

“Plunge” sounds about right, as Brandon — encouraged by his wife Monique and his good friend and fellow Anderson Inspirational 100 alumnus John Harris (’74) — filled out his b-school applications and crammed for the GMAT in a tight, two-week period. Though he originally accepted admission from another top school, his mind was changed via a pair of meetings with then admissions director Eric Mokover (’80) and longtime Anderson administrator Linda Baldwin. They convinced him to attend UCLA’s Graduate School of Management with the first class to enroll in what had recently been renamed “Anderson” for donors John E. and Marion Anderson. Brandon ultimately formed lifelong friendships with Mokover, Baldwin and the school’s namesake, John Anderson.

“I help entrepreneurs build their businesses. I learned skills at Anderson and throughout my career that help me to assist small and mid-sized businesses really move to the next level and succeed.”

Brandon’s experience at Anderson proved inspirational. He recalls that Senior Associate Dean Al Osborne was his first professor in his first class, and the two remain close today, with Osborne continuing to serve as an advisor on life and business. Through Osborne, Brandon met Professor Bill Cockrum, whose advice to “never let your business run out of cash” still resonates with Brandon today; it was Cockrum who first exposed Brandon to investment banking and private equity, where Brandon has forged a successful career for over 30 years. Brandon also credits Professor Gordon Shirley (who now heads the Port Authority of Jamaica) with encouraging him. “You’re really good, but you could be special,” Brandon recalls Shirley telling him. “He took an interest in me and showed me what it took to be great.”

Nile Capital Group is a private equity firm specializing in providing capital and services to boutique, niche and diverse asset managers with growth potential, with an objective to combine growth capital with operating expertise. Describing his work as Nile’s COO and partner, Brandon says, “The biggest thing is, I help entrepreneurs build their businesses. I learned skills at Anderson and throughout my career that help me to assist small and mid-sized businesses really move to the next level and succeed.”

That desire to help others move to the next level is not limited to Brandon’s professional career, as evidenced by his decades-long commitment to UCLA Anderson’s Riordan Programs. The programs’ mission is to motivate first-generation high school and college students, as well as recent college graduates from diverse and disadvantaged backgrounds, to consider and prepare for careers in management through education, mentorship, professional development and leadership training. Brandon entered Anderson already an admirer of former Los Angeles Mayor Richard Riordan, and when he became aware of the school’s Riordan Programs, he knew he wanted to be involved. Linda Baldwin was running the nascent program and she told Brandon that she didn’t merely want him to mentor participants, she wanted him to work for her and move the program forward.

“Immediately as a first-year, I was there. I went to the sessions, I helped run it, I worked with the mentors, I did everything that Linda asked me to do,” Brandon says. “When I graduated, it just couldn’t end. I needed to keep working with the program, so I still came to the sessions, I did a lot with the second-years, I helped her out wherever I could, and eventually I was asked to joined the board.” Brandon is quick to add that Professor Emeritus Bill Ouchi, one of the founders of the Riordan Programs, was a huge influence, both through his classroom lessons and lifelong friendship.

Now Brandon’s decades-long commitment to the Riordan Programs has earned him the 2021 Outstanding Alumni Service Award. He joins, among others, his old friend Eric Mokover, who received the distinction in 2016. The award recognizes outstanding alumni whose dedication and volunteer service have enriched and strengthened the UCLA Anderson Alumni Network, as well as enhanced the quality and reputation of the school. In addition to his work with Riordan, Brandon has often served as a guest speaker or panelist, served on his reunion committee and was named one of the school’s 100 Inspirational Alumni as part of Anderson’s 75th anniversary celebration.

“Service is something that was taught to me by my parents. They taught me that it wasn’t enough that you got over the wall and made it to the top of the hill, you needed to pull people over the wall with you,” says Brandon. “People do it in different ways, mine is being there and being visible. I like the interaction. I like the fact that if you can see something, you can believe it. Not that I’m the most accomplished person, but to some of these kids I am. And if I tell them they can do what I’m doing, it means something.”

Receiving the service award caught Brandon off guard. “I am blown away. It is not something I ever expected, nor ever thought I would be considered for, so I’m very excited,” Brandon says. “This means a lot. It still astounds me that, out of all the great alumni we have at Anderson, I got selected. It’s very humbling, and I am so, so appreciative of the honor.”

Brandon says one of the most difficult things about the COVID-19 pandemic is that it prevents in-person Riordan sessions. As with the rest of us, Brandon’s professional work as been impacted as well. “I haven’t been on a plane in a year,” he says. “I have some health concerns so I’ve been extremely careful, and I’m lucky I can work from home. So I’m able to do my job. But I miss the interactions with people. I miss going in and hearing what’s going on.”

“Service is something that was taught to me by my parents. It wasn’t enough that you got over the wall and made it to the top of the hill, you needed to pull people over the wall with you.”

Brandon does admit that the great positive of the pandemic has been having his two sons at home, the elder having returned from living in New York. “I get to see them interact together like they did when they were young kids. Really, that’s been a blessing.”

Brandon’s father, Henry Brandon Jr., passed away less than a year after watching his son walk across the stage at UCLA’s Murphy Hall and shake hands with and personally receive his MBA from John Anderson. “I’m not a doctor, but I believe my dad would be happy with how my life has turned out, the people I’ve influenced and how I’ve used my time.”

What They’re Saying about Henry:

Roxanne Mendez, executive director of the Riordan Programs: “Henry’s support of the Riordan Programs has been unfaltering over the years. His involvement from the time he was an MBA student mentor to his current role as Riordan Programs board member is testimony to his commitment to developing the next generation of leaders. He has mentored and given guidance to hundreds of young leaders through the Riordan Programs and within the community overall. Henry is very much deserving of this award and sets the highest standard of what it means to be a UCLA Anderson alumnus.”

Linda Baldwin, co-founder of the Riordan Programs; former director of UCLA Anderson MBA admissions and former assistant dean of diversity initiatives: “I think the world of Henry Brandon. He has had successes in career, in community endeavors and in raising two fine sons. Henry’s compassion for others and his relentless dedication to adding value are admirable. Beyond the role of board member in a number of organizations, Henry serves as a strategic coach to the leadership team. His commitment to UCLA Anderson’s Riordan Programs over the past 30-plus years reflects this. As an Anderson student, he was a mentor and coordinator; post-graduation, he served as guest speaker, sponsor and a source of alumni involvement with the program; and currently, he is an active board member/mentor/advocate. Henry exemplifies the Anderson spirit of making a difference through engagement with community.”

Eric Mokover (’80), former UCLA Anderson associate dean, director of MBA programs and director of admissions: “There are people who just make me smile, and Henry Brandon is one of them. He has a special knack for listening and I think that is why he has become such a trusted mentor to so many. Henry has a special affinity for the young people he meets, and the relationships he develops with them appear to last lifetimes. At Anderson, his engagement with the students in the Riordan Programs has been truly noteworthy, and he has served as a role model and big brother to generations of Riordan students. It’s obvious that positively impacting youth, and especially youth of color, gives Henry great joy. He’s a role model for me, as well, and I thank him for that. Congratulations on this well-deserved award, Henry!”