Coming to G.R.I.P.S. with Executive Coaching 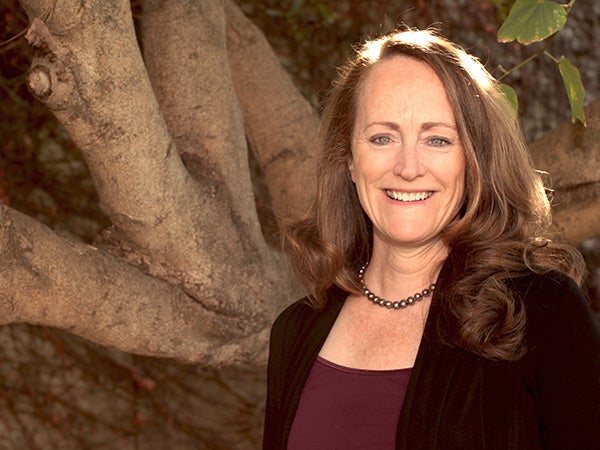 When folks ask Sara Tucker (’88), UCLA Anderson’s director of coaching and team skills, what’s different about her role, she explains why mindful meditation is a beneficial tool for executive leaders. (In fact, Tucker leads weekly meditation “drop-in sessions” for students, staff and faculty.) She has worked in a variety of capacities with different degree programs at Anderson, most recently with full-time students participating in Applied Management Research and Business Creation Option field study programs and in leadership development.
Q: What does your work as an executive coach in a business school entail?

I coach teams on process and help them figure out ways to mediate disputes. If they’re in trouble, I will work one-on-one with students to try to change their own behavior or to help them figure out how they can approach relationships on a team. It might be giving them skills to be able to apply themselves, or sometimes actually sitting with the people who are in conflict, helping to work things out.

Q: How do you help them to lead teams, not just function as a productive team member?

A natural outgrowth of working with teams and individuals on executive coaching is to transition into doing leadership work with them. We name competencies that we want to develop and work with students on how they might develop those competencies, and then follow through to hold them accountable for what they said they’d do.

Q: Why do you utilize mindful meditation as one of your coaching techniques?

In all of my coach training, it was emphasized that you cannot be a good coach to someone if you do not have a sitting (meditation) practice, because you need to clearly understand what is “your stuff” and what is “their stuff.” In order to strengthen my own sitting practice, I trained to facilitate meditation for students. We’re seeing more and more leadership development literature and programs talk about an ability to be silent within oneself in order to strengthen the ability to center in the midst of chaos; to be able to pause before making decisions and then make better decisions; and to be able to actually feel what their teams are feeling. So we cultivate students’ EQ, their emotional intelligence.

Meditation, or mindfulness, has a whole host of benefits that extend into the arena of being a better leader.

Q: How did that come about and why is “mindful” meditation the specific discipline?

All forms of meditation have their lineage. The lineage that I studied is secular mindfulness, and when UCLA decided to establish the Mindful Awareness Research Center, they did it using secular mindfulness. You don’t want people rejecting something because it requires some sort of religious belief. So they stripped from it the aspects that would invoke Buddhism or Christianity when talking about contemplation. The idea is that you don’t have to “believe” in anything to meditate, you are able to try it for yourself and see if it works.

Q: What are some common issues you work on with students? What are the biggest challenges?

The challenge is that students prioritize the learning that they get in the classroom and jobs. Of course, they should be prioritizing those two things. The biggest challenge is they’re over-committed, and working in a team requires they slow down to build relationships with the rest of the team. Google did a study that found the teams that had the best results had psychological safety, defined as roughly equal time-taking — meaning, everyone gets some air time and the ability to sense what other people are feeling.

You have to feel safe in a team in order to contribute to a team. So how do you build a climate like that? You have to slow yourself down in order to be able to learn who these other people are that you’re working with. One of the biggest mistakes is not paying attention to building that team and deciding how you want to work together, not just what you want to accomplish. The acronym I use for that is G.R.I.P.S. I introduce the idea when they’re writing their team contract. What are the goals of this team? What are the roles in this team? What are the interpersonal characteristics that we want to foster? What are the procedures we’re going to use? (We’re going to show up prepared, we’re going to show up on time, we’re going to stay off our devices.) The last one is skills. What skills are on this team and which might we have, to make up for those we don’t have?