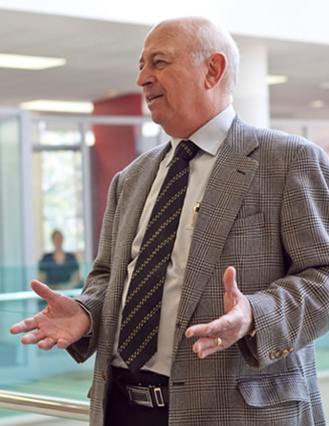 Professor of Management and Organizations, Emeritus
eric.g.flamholtz@anderson.ucla.edu
(310) 477-0444
http://www.mgtsystems.com/
Areas of Expertise:
About

Professor Eric Flamholtz has broad interdisciplinary interests. He began his academic career as one of the founders of the field of human resource accounting, and his book on this subject (Kluwer Academic Press, 1998) is generally recognized as the landmark work in this area.

Since 1976, Flamholtz' interests have focused on organizational growth and development, especially in entrepreneurial firms. His research has led to several frameworks that analyze the key building blocks of organizational success and the transitions required from one stage of development to the next. He has also developed validated methodologies for organizational assessment, strategic planning, performance management and culture management that have been applied by organizations globally. His co-authored book Growing Pains: Building Sustainably Successful Organizations, Fifth Edition (Wiley, 2016) describing this research and related applications is widely considered the definitive work in this area. It has been translated into several languages, including Bulgarian, Chinese, German, Japanese, Polish, Russian and Spanish.

In 1978, he founded Management Systems Consulting Corporation, an organizational development firm specializing in helping rapidly growing organizations to manage their growing pains and become sustainably successful organizations. The firm now has licensed affiliates using its proprietary, validated and proven methodologies in Argentina, Bulgaria, China, Indonesia, Kazakhstan, Malaysia, Russia, Singapore and the Ukraine, as well as in the U.S. and Canada. He has consulted for many companies, such as Amgen, Guggenheim Partners, PIMCO, Starbucks, Simon Properties, Neutrogena, American Century Investors, Baskin-Robbins, the Disney Stores, IBM, Navistar International and several companies in Australia, Bulgaria, China, France, Philippines, Poland, Singapore, Switzerland, Russia and Vietnam. Flamholtz served as a member of the board of directors of 99 Cents Only Stores for nine years, and was chair of the strategic planning and compensation committees.

His Ph.D. dissertation was co-winner of the McKinsey Foundation for Management Research Doctoral Dissertation Award. In 2007, he received the Distinguished Ph.D. Alumni Award from the Ross School of Business at the University of Michigan "in recognition of his contributions to and excellence in management and organization." In 2012, he was appointed Honorary Professor at Almaty University, Kazakhstan. In 2014, Flamholtz received a Distinguished Alumni Award from Washington University in St. Louis, where he received his MBA.

flamholtz, E.G. & Nayar, Madhavan (2007). Information Integrity in the Digital Age: A challenge for the board. Management Online Review.