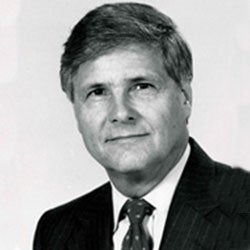 J. Clayburn La Force, Jr. served as dean of UCLA Anderson from July 1, 1978 until June 30, 1993. La Force began his tenure at UCLA in 1962 as a faculty member in the Department of Economics. From 1969 to 1978, La Force served as the chairman of the Economics Department. In January 1991, he was appointed acting dean of the Hong Kong University of Science and Technology.

He currently is a director of Eli Lilly and Company, Rockwell International Corporation, Jacobs Engineering Group, Inc., the Timken Company, Imperial Credit Industries Inc., BlackRock Funds, Payden & Rygel Investment Trust, Provident Investment Council Mutual Funds, and The Century Council. La Force is an adjunct scholar of The Heritage Foundation, and a member of The Mont Pelerin Society. He was chairman of President Reagan's Task Force on Food Assistance from 1983 to 1984, a member of the National Council on the Humanities from 1981 to 1988, and member and chairman of the State of California Worker's Compensation Advisory Committee from 1974 to 1975. He also is a board member of the Foundation for Research in Economics and Education, The Lynde and Harry Bradley Foundation, the Pacific Academy for Advanced Studies, and the Foundation Francisco Marroquin.

In 1985, he received the Invest-in-America National Council's American Eagle Award, and in 1986, was honored by the Reason Foundation. La Force has received an honorary doctorate degree in social sciences from the Universidad Francisco Marroquin, and was the recipient of Fulbright, Social Science Research Council, and American Philosophical Society academic research fellowships. He is a member of Phi Beta Kappa.