A New Expansion on the Horizon

It bears repeating once again, that while each economic recession is a little bit different, this last one was a lot different. Through the post-World War II period, recessions have been characterized by downturns in the purchase of goods by households, and by slack housing markets. In this last recession and in the current recovery these did not happen. In fact, the opposite occurred. Consequently, both multi-family housing development and industrial space construction have remained in the growth portion of their building cycles. For the retail and office spaces however, the trajectory up until now has been different. The flight from both in-store shopping and in-office work hit these spaces hard. Developer sentiment as represented by the indexes created from the Survey bifurcated into industrial and multi-family optimism and retail and office pessimism. The 2022 Survey conducted in December 2021 Survey marks a significant change. Pessimism that has been prevalent since 2020 has, for the most part, turned to optimism, and based on our past experience with the Survey, this foretells the beginning of a new growth period in retail and office construction.

Statistical forecast analysis has as its basis the proposition that past statistical relationships hold into the future. A knowledge of those correlations, current data and perhaps some assumptions about data not yet known, lead to the forecast. Today, the ability to use past data to forecast into the future is more limited than before. Nevertheless, the initial response to the opening up and continued growth in the state’s economy in spite of the Delta and Omicron variants of COVID, are clearly present in the current Allen Matkins/UCLA Anderson Forecast California Commercial Real Estate Survey. The Survey has a rich set of questions such that, with past trends in the Survey’s indexes, we can now infer a more widespread turn of commercial real estate from the trough of the recession.

The Allen Matkins/UCLA Anderson Forecast California CRE Survey compiles the views of commercial real estate developers, owners, and investors with respect to markets three years hence. The three-year time horizon was chosen to approximate the average time a new commercial project requires for completion (though projects with significant entitlement and/or environmental issues often take much longer). The panelists’ views on vacancy and rental rates are key ingredients to their own business plans for new projects, and as such, the Survey provides insights into new, not yet on the radar, building projects and is a leading indicator of future commercial construction. For example, if a developer were optimistic about economic conditions in Silicon Valley’s office market in 2024, then initial work for a new project with an expected ready-for-occupancy date of 2024 — a business plan, preliminary architecture, and a search for financial backing — would have to begin no later than the latter part of 2021.  Although optimism does not always translate into new construction projects, this sentiment is usually a prerequisite for it. 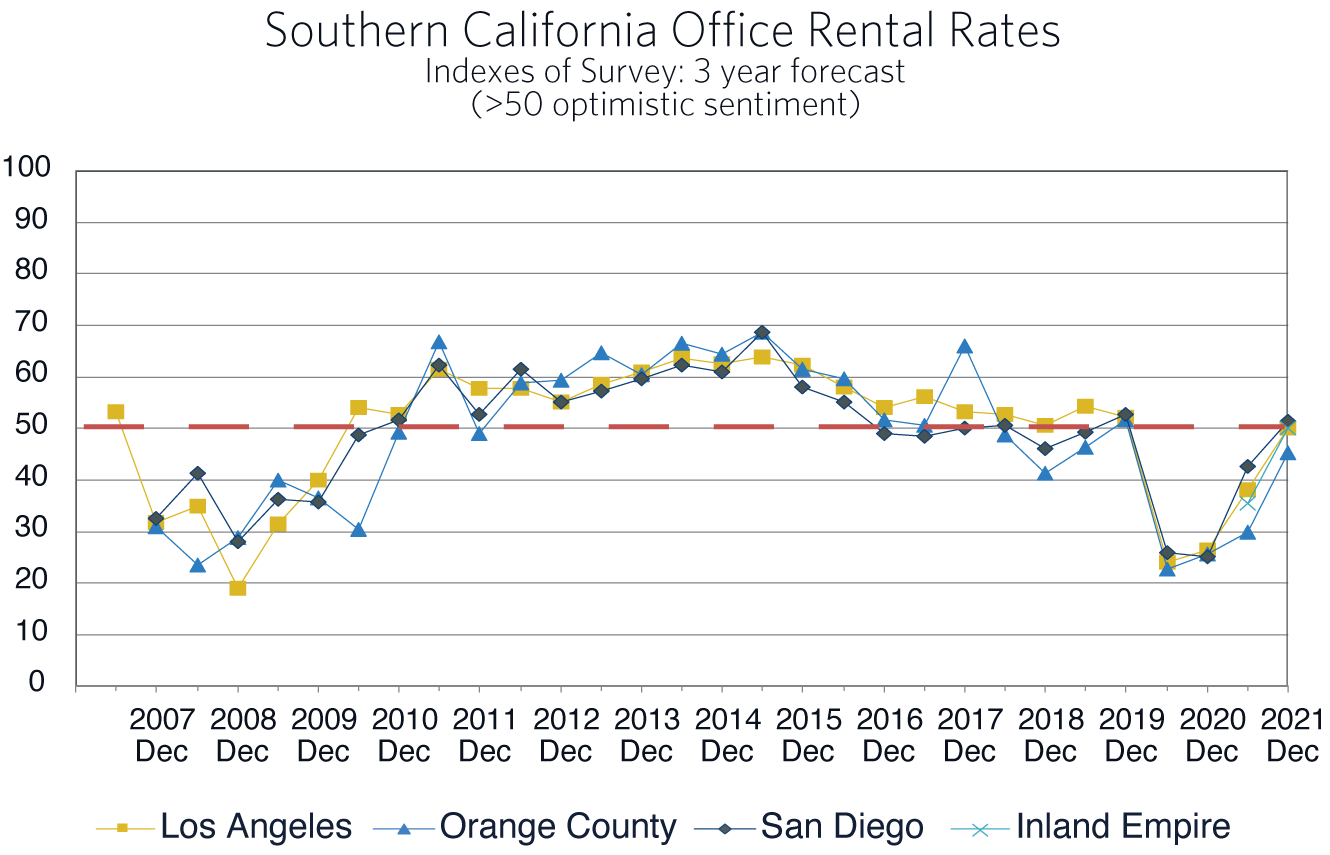 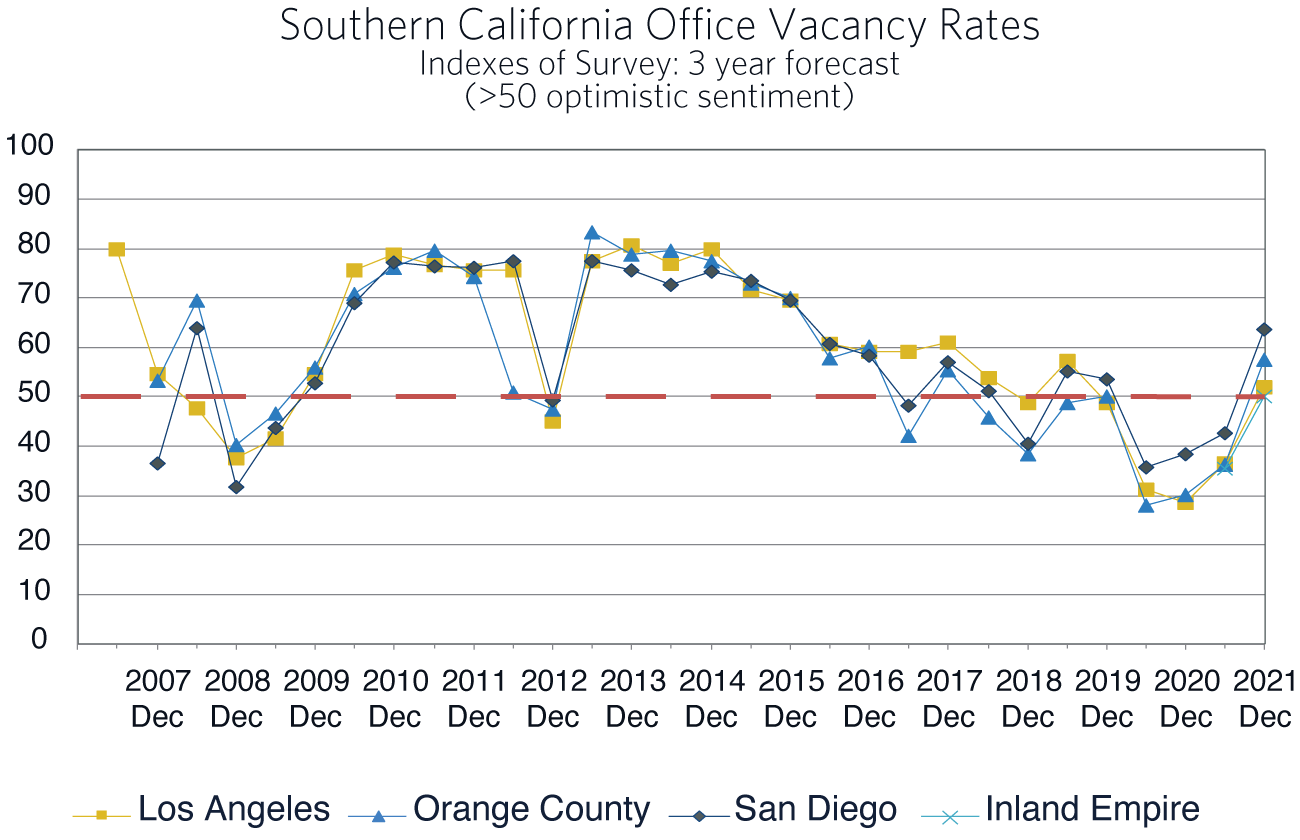 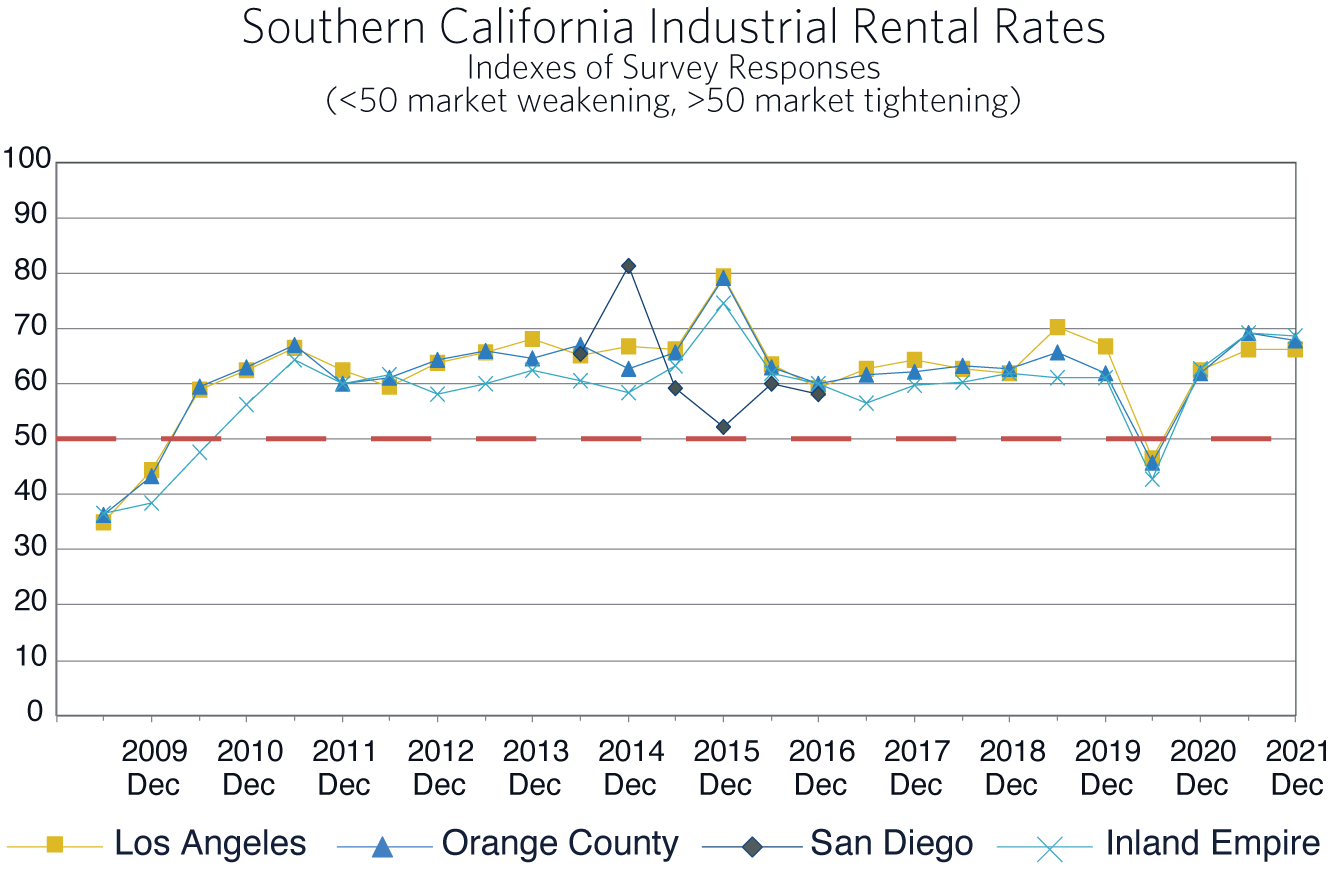 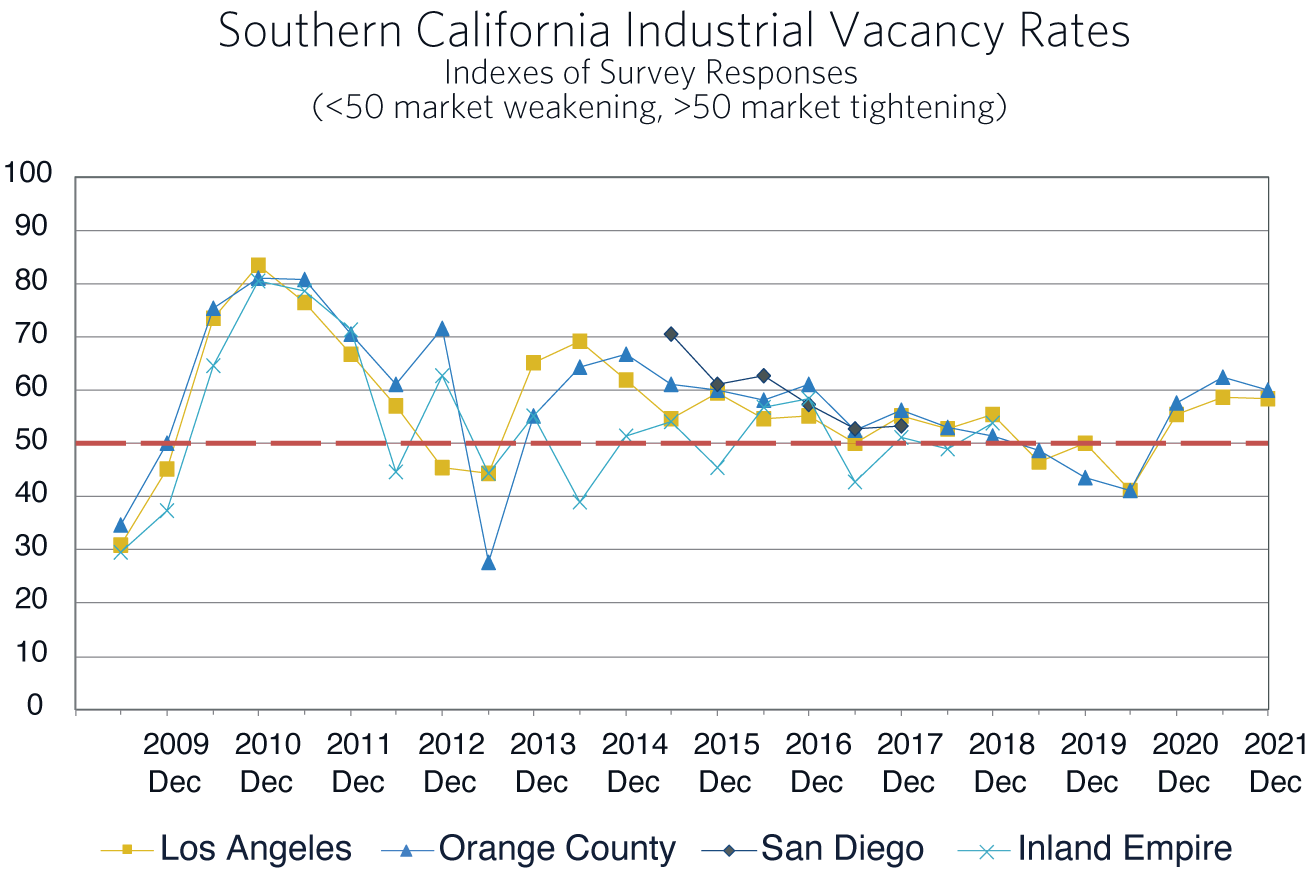 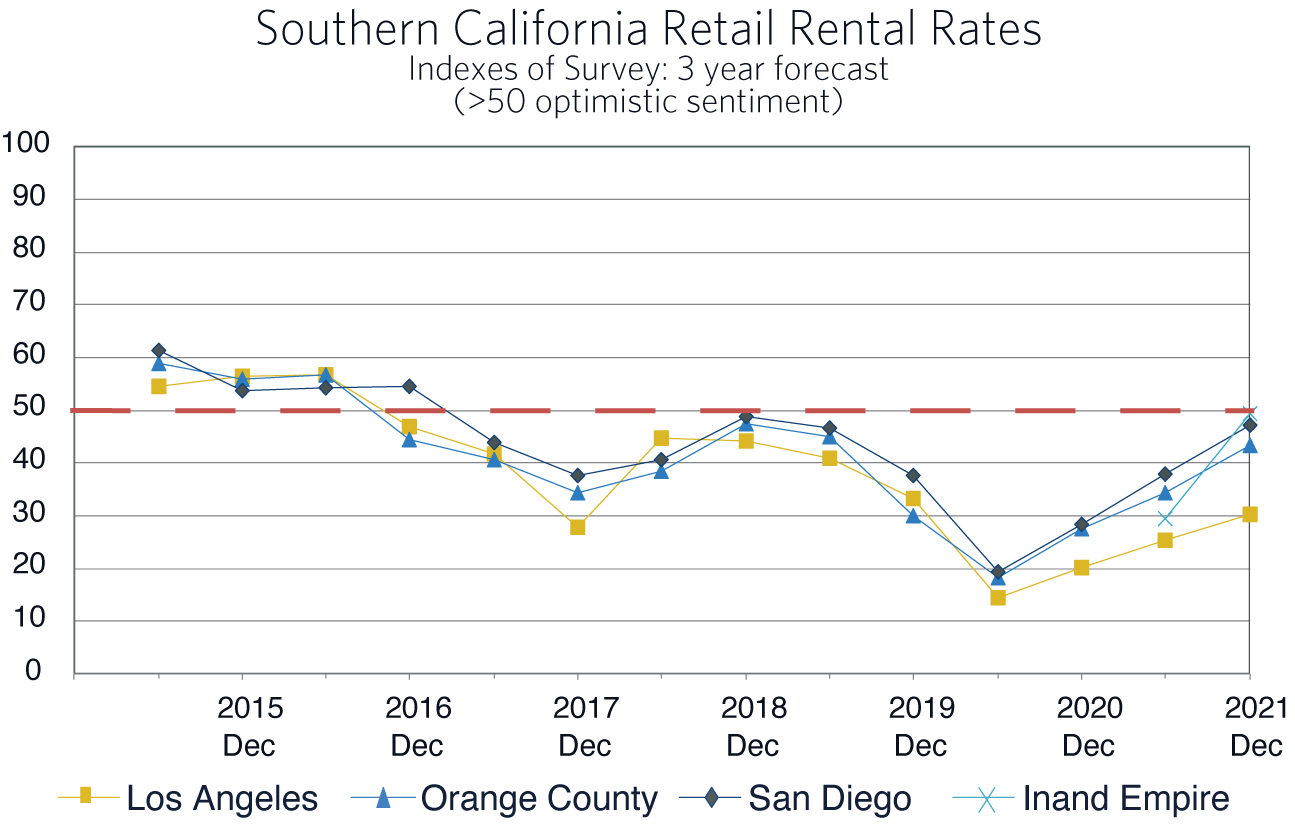 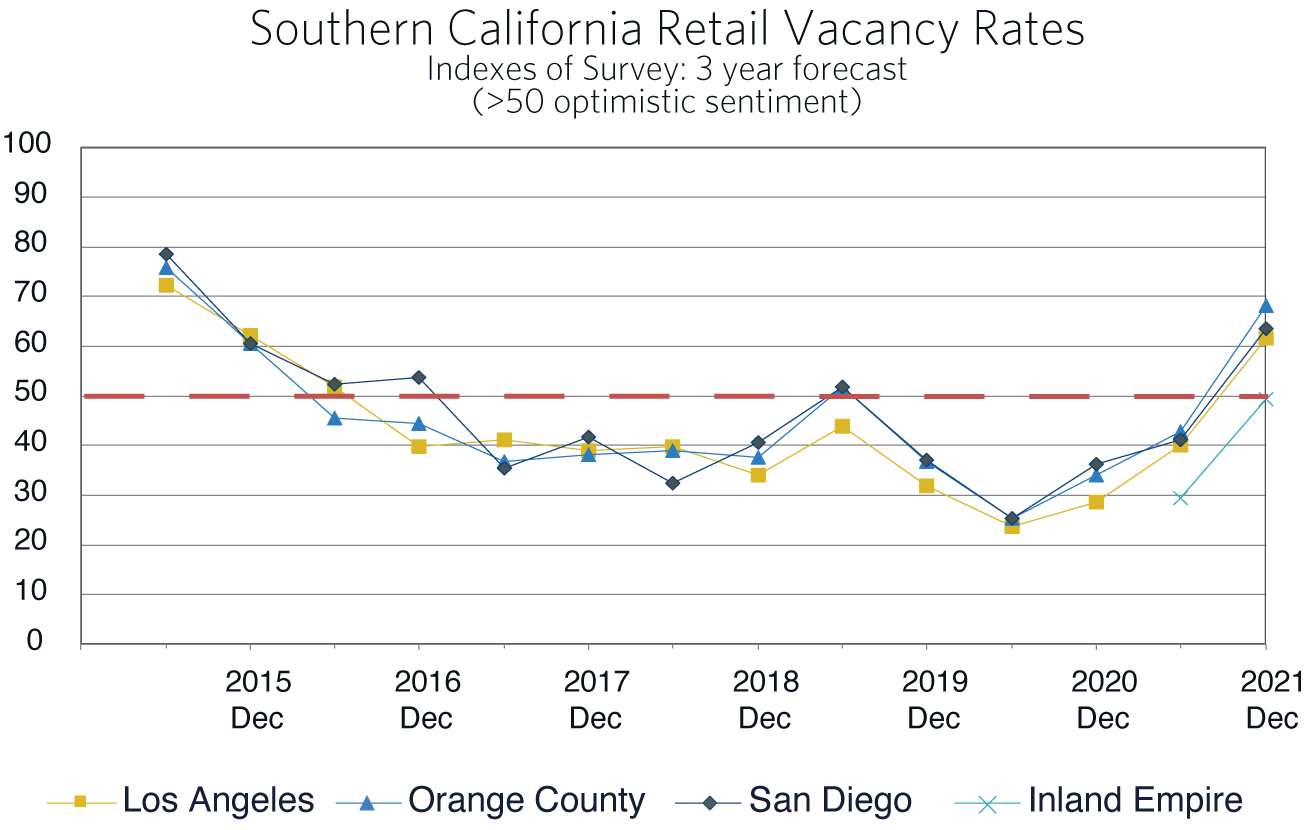 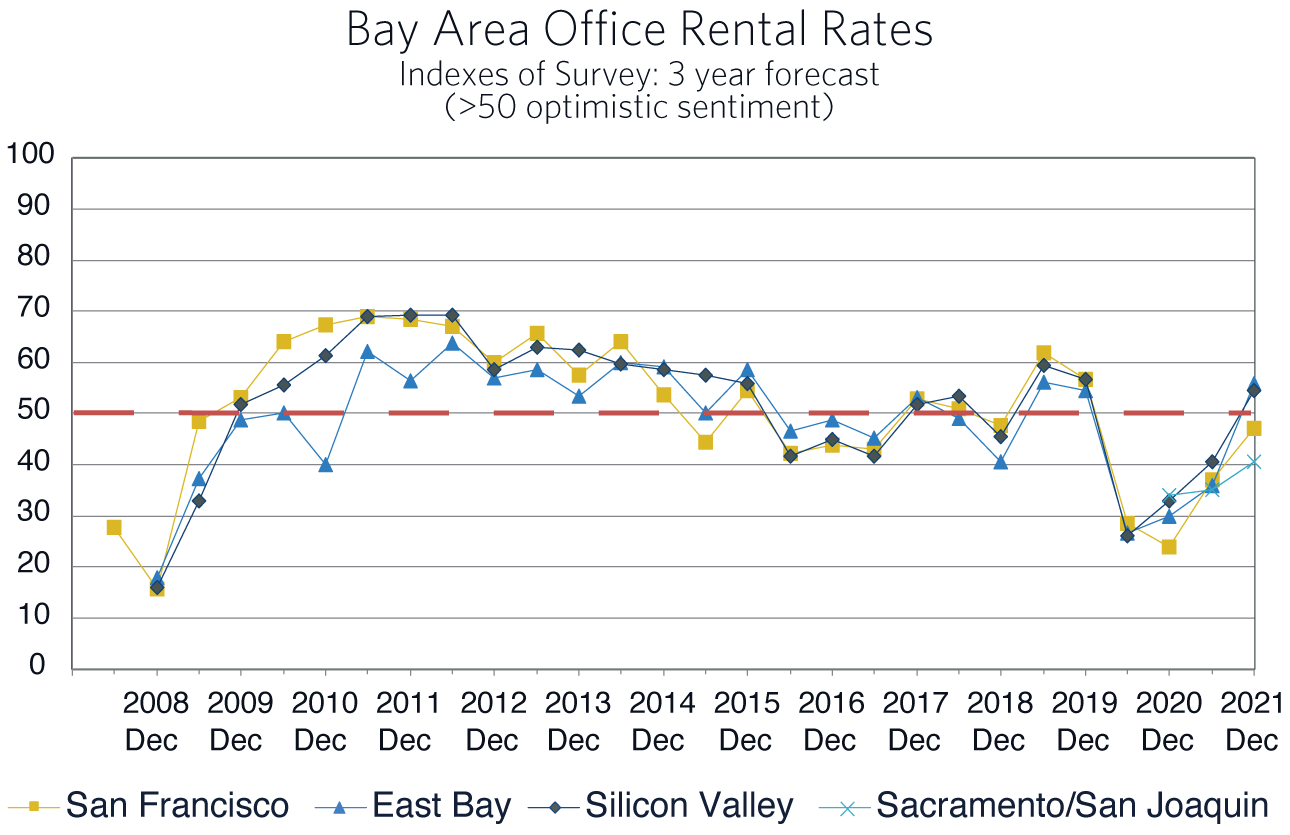 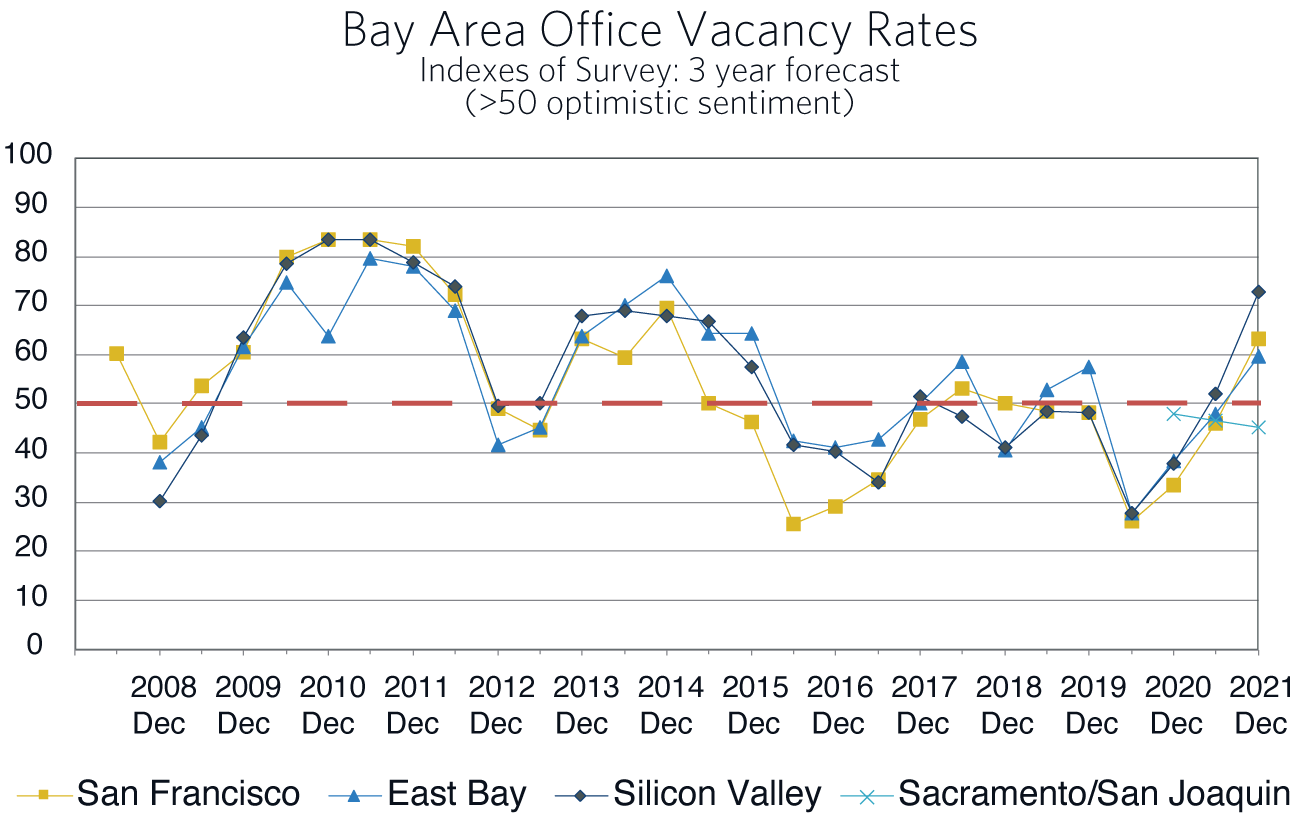 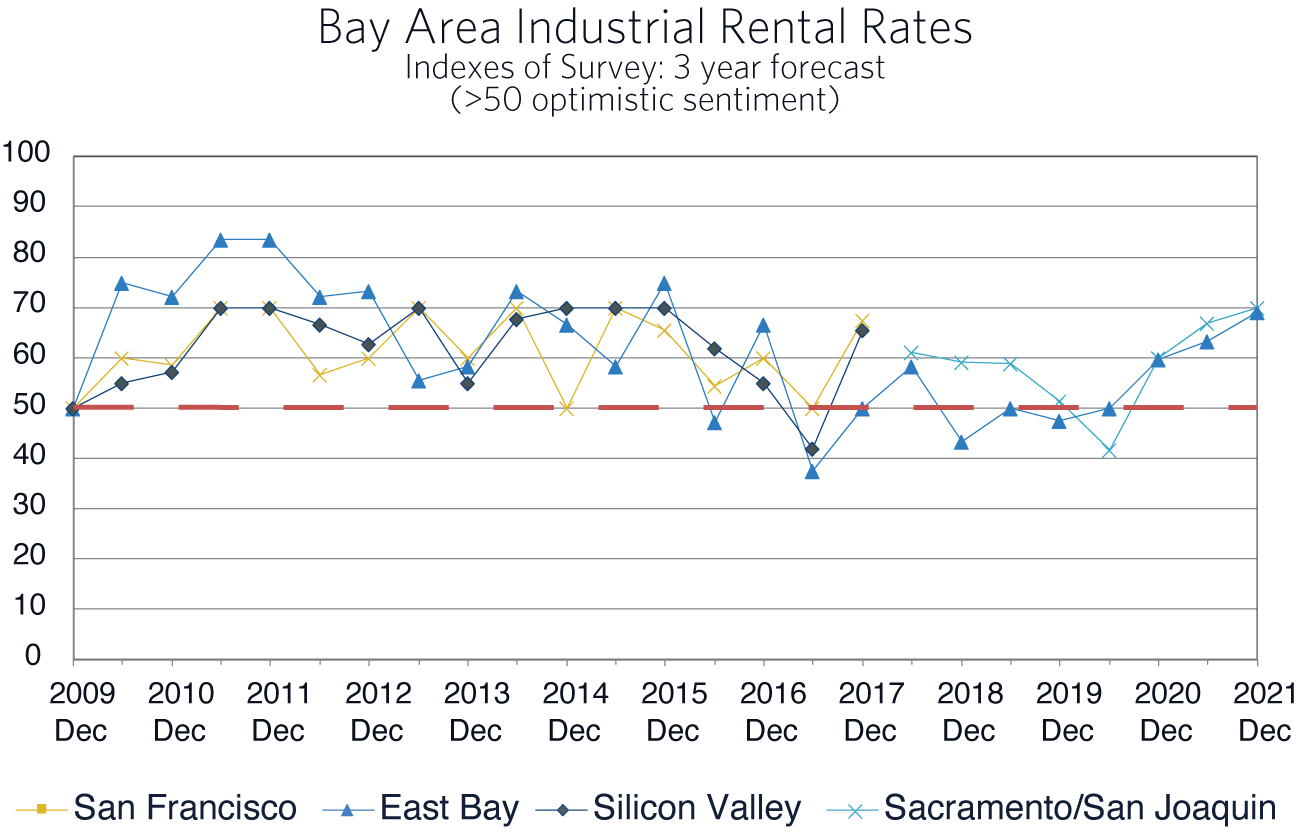 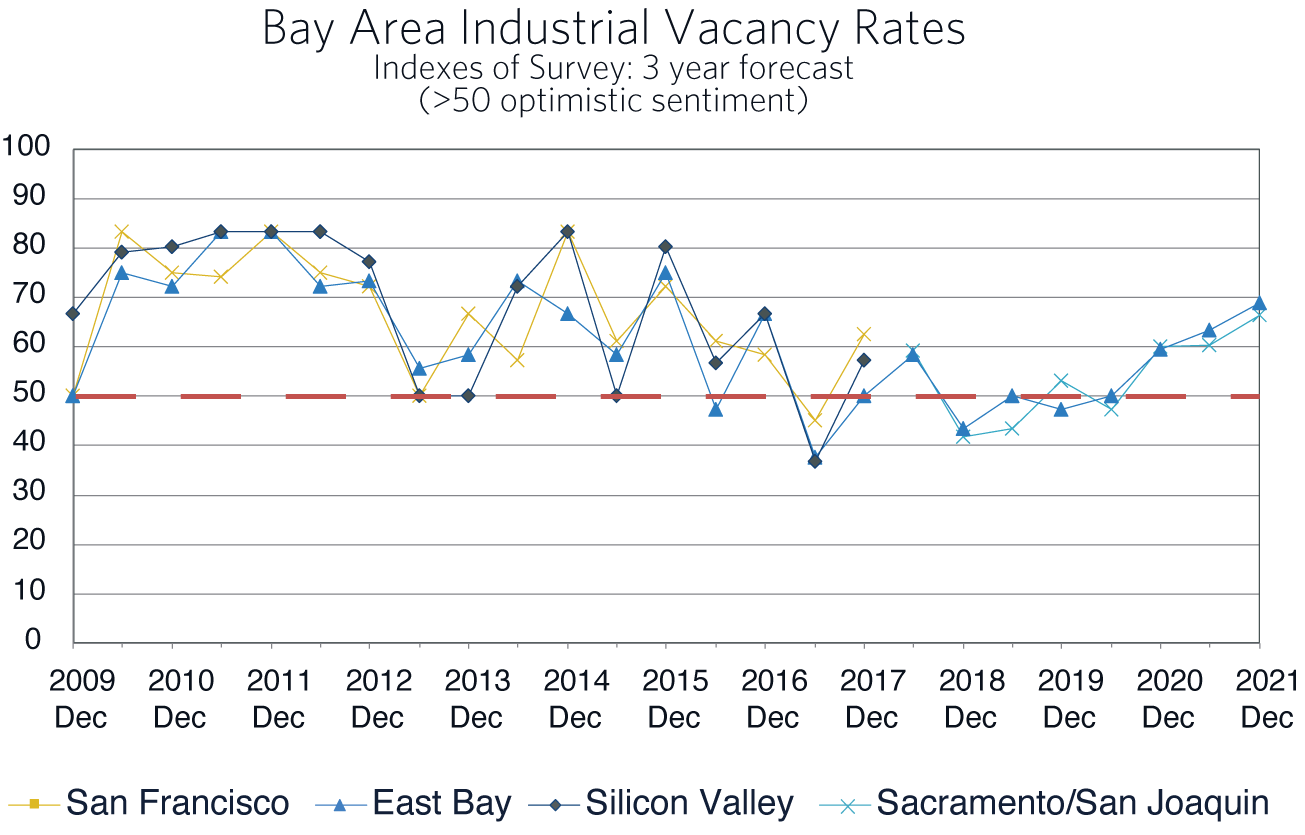 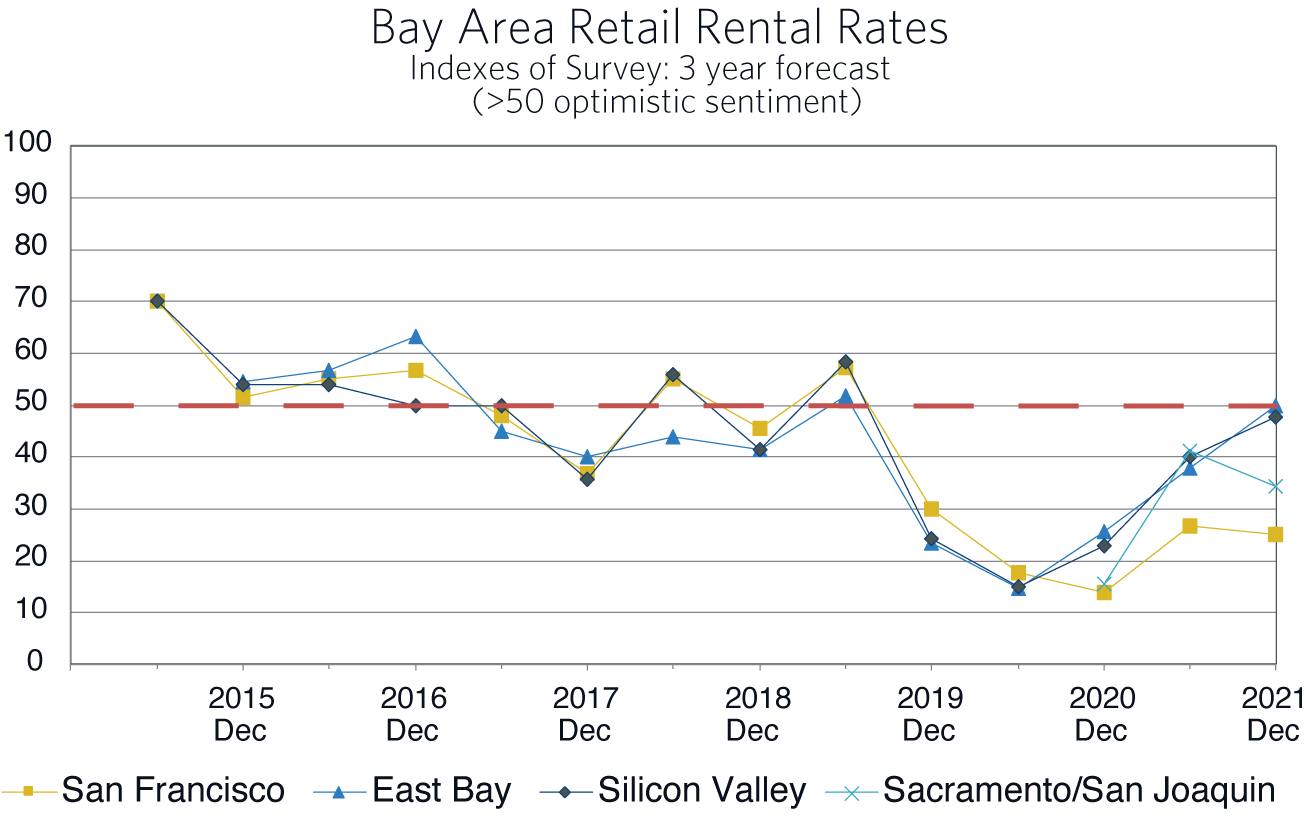 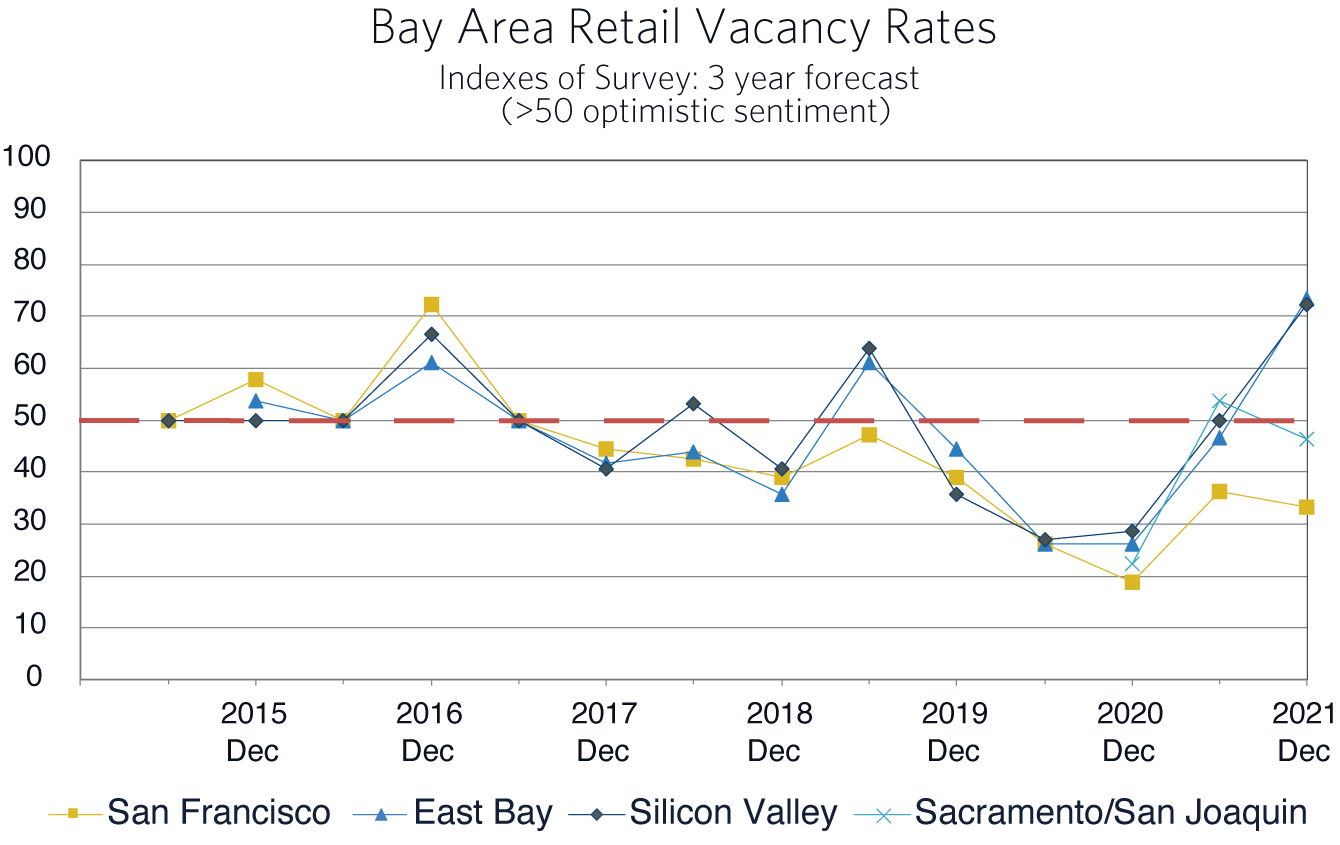 Remote work will decimate the office environment, or so the narrative went in 2020. Some surveys had up to half of current office space redundant. But there is a danger in extrapolating from limited data during a crisis. Increasingly, companies are seeing the value of office-centric work for establishing culture, creating loyalty, inducing creativity and the mentoring of young employees. It seems clear now that the office will be back, but in what way? Most likely, the tools learned during the strict work-from-home episode of 2020 will allow for more flexibility and less than full time in the office for many people. And the configuration of the office will surely be different post-pandemic. The implication of these factors is that there will be a need for new office development consisting of the remodeling of existing offices, the building of satellite offices to reduce employee commute times, and the creation of new mixed-use office complexes. The latest Survey provides a confirmation that overall, the Survey’s developer panels see a turn in office markets and are planning for it (Chart 1).

In Northern California, the panelists are now forecasting that by 2024 demand will have grown at least as fast as supply. The sole exception is the Sacramento market, a market highly dependent on the demand for space by state government. The panels are forecasting rental and occupancy rates to improve and have moved from pessimism about the coming three years to optimism. This has led to a larger percentage of the panelists planning on starting new projects in the next 12 months than has been the case since before 2016. The office market may not be back in Northern California just yet, but office development is projected to be back by the end of 2024 (Chart 2).

“The recently predicted demise of the office market certainly appears to have been greatly exaggerated.”

Is retail poised to come back from the bottom of the cycle? The last four surveys indicate yes. For each, pessimism about occupancy and rents three years hence has declined, and in the latest Survey, pessimism turned to optimism in four of the markets surveyed and to neutral in one additional market (Chart 3). There are three forces at work creating this optimism. First, limited return to the office has increased the demand for retail in the core of each city. To be sure, it is not back to where it was pre-pandemic, but the trend is in that direction. Second, the building of new housing throughout the state has created a demand for new retail close to that housing. Third, there is expected to be a demand for reconfiguration of retail establishments to a more open air post-COVID concept to attract consumers back to stores.

The four markets with optimistic developer sentiment, East Bay, Silicon Valley, Orange County and San Diego are markets with low unemployment: 4.5%, 3.2%, 4.1% and 4.6% last October, respectively. This growth in income generates a growth in consumption and therefore in the demand for retail. The higher unemployment in the greater Sacramento/Delta region and in Los Angeles provides a partial explanation for the pessimism that still exists in those markets. With respect to retail space in San Francisco, a city with a large pre-pandemic international tourism and convention business and that has a significant non-resident commuter population, the panelists remain quite pessimistic.

There are now solid targeted opportunities around the state, particularly where new housing developments are springing up. The booming housing market will continue to generate this demand. Although there remains some pessimism expressed in the latest Survey, the overall optimism in it has driven the percentage of the panelists without new development plans over the next 12 months to the lowest level since before 2017 (Chart 4). Thus, the current Survey indicates a turnaround and a new retail building cycle beginning before the end of 2024.

Industrial space markets continue to be the outstanding performers in California. Over the past several years there have been consistently high occupancy rates and superior lease rate growth. With the exception of the Survey taken May 2020, sentiment has been well into the positive range (Chart 5). In the latest Survey, overall sentiment about the coming three years has reached the highest level for a Winter Survey since 2015.

This outlook rests on a forecast by our panelists for significant increases in demand outrunning planned and projected supply over the coming three years (Chart 6). This view of an even tighter market stems from the current surge in demand that has driven vacancy rates to astonishingly low levels. Los Angeles and the Inland Empire vacancy rates are now under 2.0%, and Sacramento and the East Bay Area are now between 3.0% and 4.5%.

Chart 4 shows demand and supply question responses over the past two and a half years. A value over 50 indicates that the panelists expect demand for space to increase faster than the supply of available space. The Survey shows 70% of the Southern California panelists and 59% of Northern California panelists plan to begin at least one new development and about half will begin more than one new development in the next 12 months. While demand may not exactly match the panelists forecasts, it is clear that the construction of new industrial space has years to go before it hits its zenith.

“Industrial developers in California are having to look further east and north to find land.”

Despite the increased demand for single-family detached homes in the suburbs, a continued work-from-home culture, and falling rental rates, our multi-family panels are even more bullish about the coming three years than they have been any time since 2016 (Chart 7). Across the board are forecasts for rental rates to increase faster than the rate of inflation, and vacancy rates to fall between now and 2024. Although the Omicron wave of the pandemic has delayed some return to the office, the overall performance of the vaccines has resulted in an increased number of city amenities now available to consumers, and these will be attractors inducing a return to the city core, particularly among younger workers.

Multi-family housing close to employment centers is also attractive for many whose alternative would be long commutes from the outlying suburbs even if such a commute were only a few times per week. In addition, growth in the logistics industry, the state’s increased infrastructure spending, and the move to low-rise satellite offices means that the demand for multi-family housing in the inland parts of the state is likely to experience continued growth as well. The environment for building multi-family homes has improved with a series of bills, SB8, SB9 and SB10, which standardized approval processes, opened land currently zoned for single family homes to the construction of small multi-family structures, and reduced barriers to multi-family construction in transit corridors.

Fully 45% of both the Bay Area and Southern California developers on our panels plan on beginning multiple developments in the coming 12 months and another 23% in Southern California and 14% in the Bay Area are planning on a single new project. For the eight markets surveyed, demand is expected to outstrip supply through 2024. For the Bay Area, the beginning of a return of renters who sat out 2020 in remote locations relative to their office is at least part of the reason why 70% of the panelists are expecting faster growth in demand than in supply. In Southern California a smaller percentage, 50%, expect demand to grow faster than supply and another 36% are expecting balanced growth.

“Multi-family development still represents one of the most compelling risk adjusted return investments.”

The Survey In Perspective

The Winter 2022 Allen Matkins / UCLA Anderson Forecast California Commercial Real Estate Survey was taken as the Delta/Omicron phase of the pandemic was raging and was slowing the return of consumers to the purchase of services, to the office, and to vacation travel. While the Survey respondents were, understandably a little cautious about the next year, they were also more optimistic on all fronts than they expressed in the previous two Surveys. Industrial markets, perennially experiencing very low vacancy rates, remain poised for a good run of new building and superior returns. Multi-family housing has rapidly bounced back from a “falling-rent” hiatus and is also in for a run of new project development. Though the last two Surveys suggested a turn in office and retail markets, it has happened sooner than expected. So, the new CRE cycles appears to be real and are now predicted by the current Winter Survey.

“Pessimism that has been prevalent since 2020 has, for the most part, turned to optimism.”