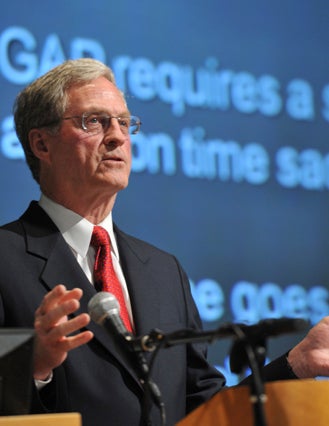 Adjunct Professor Emeritus, Decisions, Operations and Technology Management
“For the past 32 years I’ve had the honor to teach the brightest MBAs who have become recognized high-tech industry leaders and entrepreneurs. I consider myself very fortunate to have had this opportunity at Anderson.”
bob.foster@anderson.ucla.edu
(310) 206-0937
Facebook
LinkedIn
Areas of Expertise:
About

He also served as the director of the Fully Employed MBA Global Access Program (GAP), the field study requirement that matches teams of students with global firms to develop business strategies designed to enable the companies to compete in larger markets. More than 600 companies and 3,000 students have completed this course. It was through this work with 150 Finnish technology companies over a 15-year period that in 2011 he was awarded the Knight, First Class, Order of the White Rose of Finland by the President of Finland for the services the GAP program provided to Finland’s Technology Agency.

Prior to becoming a full time faculty member in 2000, Foster spent 15 years teaching part time at Anderson while serving in various corporate positions. He started his career at Xerox Computer Services as vice president of marketing and sales. XCS was a startup division of Xerox that sold enterprise resource planning and accounting software services delivered via cloud computing, then known as “time sharing.”

As an entrepreneur, he was founder, president and co-owner of Ellison Robotics, an early-stage technology company that designed and built factory automation and robotics manufacturing systems. The company provided engineering design, software development and systems integration to produce custom turnkey automated manufacturing systems and was the exclusive distributor in the western United States for Fanuc of Japan. Projects included robotic camouflage spray painting the General Dynamics M1A1 Abrams main battle tank; coating anti-radar coatings on cruise missiles made by McDonnell Douglas and General Dynamics; and painting the Northrop B-2 stealth bomber.

He was president of Thomas Bros. Maps, responsible for the conversion of the manual mapping process to digital and introduced the first digital street maps on CDs — two years before Google was founded. He also served as CEO of Goldsworth Engineering, an engineering research and development company that designed and built computer-controlled machinery for the fabrication of composite plastics such as fiberglas, Kevlar and graphite. Sales under his watch increased 250% in one year alone. As CEO at Thinque System, he developed customer relationship management software based on Windows CE for hand held computers.

With his inherent understanding of the basics of technology and data processing, and recognizing that he had the ability to help people with complex technology-based products and services, he found that “teaching was a way I could ‘give back’ to the school where I gained the tools and concepts that enabled me to be successful personally and professionally.”

2010 Selected one of 100 Most Inspirational Alumni Making an Impact