Overcoming Myths and Misinformation to Help Those in Greatest Need

Going Outside Her Comfort Zone to Help Others Succeed

Going Where Leaders Are Needed Most

Recognizing him as a visionary who has led a revolution in entertainment, UCLA Anderson honored Netflix co-founder and CEO Reed Hastings with its 2018 John Wooden Global Leadership Award at a gala dinner at Hollywood's Raleigh Studios. 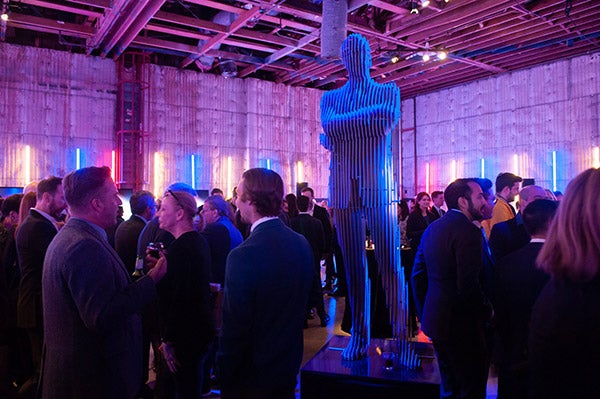 Now in its 11th year, the award is named for legendary UCLA basketball coach and leadership expert John Wooden. It is given annually to an exceptional executive whose leadership style and service to the community reflect Wooden's high standards of performance, integrity and values.

“Like Coach, Reed Hastings has demonstrated leadership that’s fueled by excellence and respect,” UCLA Anderson Interim Dean Al Osborne, Jr., said in his introduction of the Netflix leader, whose company is the leading internet entertainment service. “Reed has led a revolution in the way entertainment is created and shared.”

In addition, Osborne said, Hastings’ “visionary thinking about how teams can be organized for high performance and success … has earned him this recognition.” The award also noted his long-running commitment to improving public education. 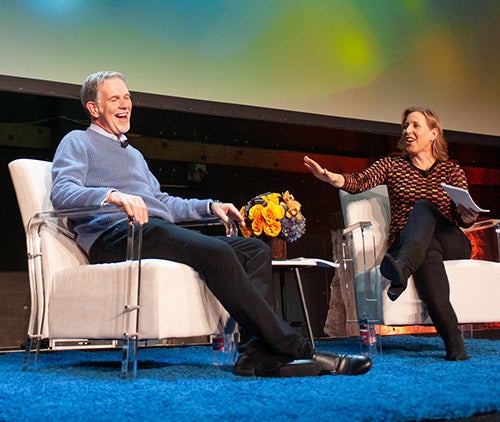 In keeping with tradition at the Wooden award ceremony, Hastings participated in an on-stage conversation, moderated this year by Susan Wojcicki (’98), CEO of YouTube and a member of UCLA Anderson’s Board of Advisors. The honoree quickly won over the audience, noting that Netflix is “a massive hirer of talent from Anderson ― Anderson produces some of our rock star employees.”

Wojcicki began with a reference to the Netflix-produced film Roma, which, earlier in the day, had earned awards for best film and best director (Alfonso Cuarón) from the New York Film Critics Circle Awards. The recognition served as a reminder of Netflix’s evolution from a service that rented DVDs to customers through the mail to the content-producing, streaming giant it is today. Netflix has more than 130 million streaming subscribers worldwide and has produced around 700 original titles, including its first, the acclaimed series House of Cards. The company was awarded 23 Emmys in 2017, and Netflix's Icarus won the Oscar for Best Documentary Feature.

Wojcicki also mentioned Netflix’s legendary 100-slide culture deck — authored by Hastings — that Wojcicki said had been required reading at Google in her early days there. She inquired as to Hastings’ motivation to codify his company’s culture.

“We have a unique culture at Netflix, getting incredible people together and setting them free,” Hastings said, noting that he feels companies need a culture that avoids politics as they grow. “The first trick is, we don’t try and keep things or preserve them. We try to improve. Our culture is good but we need to make it better.”

Hastings pointed out that the company has become more inclusive, more global over time. “We’re a better culture than we were five or 10 years ago.”

The conversation touched on a wide range of topics, including Netflix’s growing collection of competitors (“We’re doing our best to get ready. You do your best when you’re up against great competition”) and the future of content providing (“Most of it will be on-demand television”). Ultimately, Hastings believes in the power of great storytelling. He said that it wasn’t until Netflix’s chief content officer Ted Sarandos found House of Cards that the company committed to producing its own series. “House of Cards was ‘the one,’” Hastings said. “I had the smarts to let smart people make decisions.”

Wojcicki also asked Hastings about his 20-year commitment to educational philanthropy and advocacy. Hastings said it stemmed from his time in the Peace Corps in Swaziland, where he was assigned work as a teacher. Of his interest in education, he said, “I think if you can make a contribution to solving one significant problem in the world, that’s amazing.”

“I think if you can make a contribution to solving one significant problem in the world, that's amazing.”

The audience included luminaries from both the UCLA Anderson and greater UCLA communities, including Anderson Board of Advisors members, faculty, alumni and students, along with members of both the Wooden family and the school’s namesake Anderson family. The ceremony included an appearance by Lynn Shackelford (B.A. ’69), who started on three of Coach Wooden’s national championship teams before a career in broadcasting that included a stint as a Los Angeles Lakers announcer.

Shackelford, who took a moment to josh with fellow Bruin basketball star Jamaal Wilkes and current UCLA coach Steve Alford - both in attendance - praised the team culture Coach Wooden fostered. Shackelford reminded attendees that “Coach wanted to win more than anyone” but added that “what made him different as a coach was his emphasis on effort. For us, winning became a wonderful by-product.”

Four UCLA Anderson students were awarded the John Wooden Global Leadership Fellowship, which is among the most prestigious honors Anderson students can receive. Jessica Barnette (MPH ’14, FEMBA ’19), Leah Maddock Loh (MPH ’05, EMBA ’19), Gerry Sims (’19) and Ryan Tan (UCLA-NUS EMBA ’19) were featured in video interviews with Osborne and took the stage to express their thoughts on what Coach Wooden’s values-based leadership means to them. Wooden Fellows are recognized because they embody his focus on ethics, team spirit, skill, hard work and loyalty, along with a commitment to constant learning, continual improvement and innovation. Each fellowship is worth $25,000 and is funded by the annual John Wooden Global Leadership Awards Dinner.

Osborne also paid tribute to the late Willie Naulls, who played under Coach Wooden in the early 1950s. Naulls went on to play for the New York Knicks and Boston Celtics, and became the first black team captain in integrated professional sports history. Osborne spoke of the difficulties Naulls endured as an African-American athlete and how Coach Wooden insisted that, in segregated venues, all his players, black and white, eat together and use the same facilities. “Coach instilled in his team respect. Respect for themselves, respect for each other. One team, one standard. That’s a lesson every bit as relevant today as it was 60 years ago. It’s that character that we celebrate tonight.”