Going Outside Her Comfort Zone to Help Others Succeed

For years, it has been a personal motto for Jessica Barnette: “By empowering others, we all rise.”

In her life and career, she has chosen, again and again, to travel well beyond her personal comfort zone, challenging herself to learn, to grow and to better the lives of others.

That philosophy stems from her parents’ examples.

“My dad was in the Navy for 24 years and taught us you have to involve yourself with something bigger than yourself,” Barnette says. “My mom was a teacher and from her I learned the patience and skills to interact interculturally. They have always been very supportive as I’ve pursued educational and growth opportunities, which started during high school when we volunteered monthly at an orphanage in Mexico. Life outside of the U.S. was fascinating to me.” 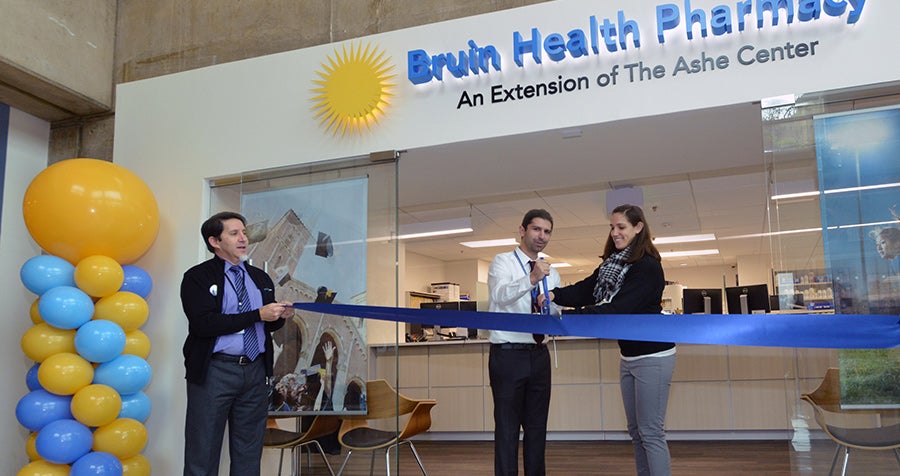 As a project manager at UCLA’s Ashe Center, Barnette participated in the ribbon cutting at the new Bruin Health Pharmacy that opened in Ackerman Union in 2016

A double Bruin, Barnette has traveled to more than 50 countries, studied in Germany, Italy and South Africa, and served with the Peace Corps in Ukraine. She is also a Forté Foundation Fellow, an eight-time marathon finisher, an active member of Net Impact and a UCLA Anderson FEMBAssador, serving as a liaison for prospective students to learn about Anderson’s fully employed program.

While earning her UCLA master’s degree in public health, she visited Jordan to assess the availability of emergency contraception in refugee settings. Later, she managed programs for the Arthur Ashe Student Health and Wellness Center, the Center for World Health and the UCLA Blum Center, which improves the health and well-being of Latin American communities.

Since June, she has interned with global entertainment company Fullscreen Media, helping to create its 2019 health and wellness strategy. She is also director of operations at a startup, WellStart Health, which aims to help people reduce the risk of chronic disease through mindfulness, movement, diet, resilience and social support.

“We empower them with the knowledge and practical skills to take back control of their health,” she says. “It’s life changing.”

After graduating from Santa Clara University with a degree in communications, Barnette joined the Peace Corps, spending two years as an English teacher in Ukraine. In her free time, she helped organize a summer camp for HIV-positive kids aged 8 to 14. She then helped lead the camp for two summers.

“It took the kids a few days to actually admit they were HIV positive,” she says. “They had been told to always lie about their status. We had to tell the venue hosting the camp that the participants were part of a leadership program; we couldn’t disclose that it was a camp for HIV-positive youth, for fear they would void our contract.” 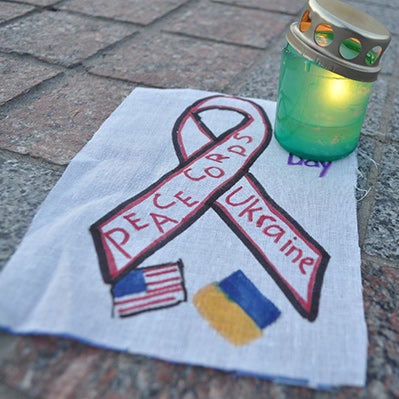 Barnette’s Ukranian students created symbols for a candlelight memorial to emphasize the partnership between the U.S. Peace Corps and Ukraine in helping to raise awareness of HIV/AIDS

Later, she said, the venue staff understood that “our main objectives were to give the summer camp experience to this forgotten group of kids, while also empowering them to be leaders in their society.” They were invited to return the next year, and the camp has continued every August since 2011.

Barnette brought her impact mindset with her to Ukraine, encouraging her students to go outside their comfort zones — and got outside her own by learning the Ukrainian language.

“One student told me, ‘I never realized how big the world was outside of Ukraine; now I want to go explore it.’” By asking her friends and family from around the world to send her students postcards, she was able to show them a little of life beyond Eastern Europe. “We collected over 60 postcards from eight countries; it was a pretty incredible response.” 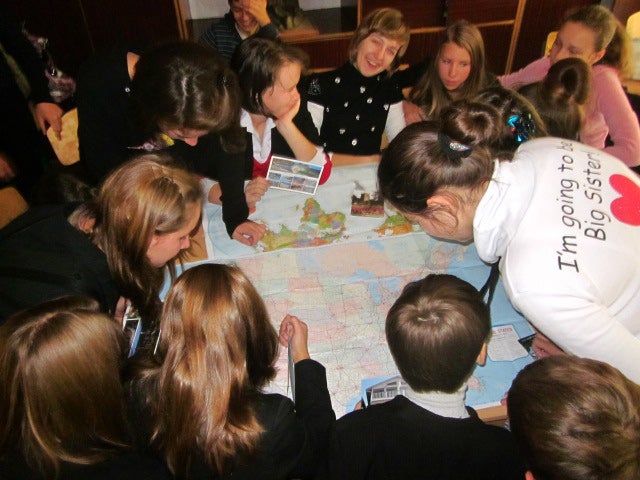 Barnette says she had not been planning to go to business school. “But I craved the challenge of continuing to grow as a leader. I attended the Wooden Awards ceremony before I applied to UCLA Anderson and it made me realize how Coach conveyed leadership both on and off the court — and what it means to be a Wooden Fellow.”

Now, with her public sector experience, her MBA training and her drive to empower others, she is poised to reach for new heights in a career at the dynamic intersection of health and technology.

Her goal? “To make a sustainable impact in the world around me.”