Going Where Leaders Are Needed Most

John Wooden grew up in Indiana. He played basketball. He went to Purdue University.

Those things are also true of Gerry Sims, a 2018 John Wooden Fellow. But Wooden’s influence on Sims runs deeper than shared geography or college or basketball.

A former U.S. Marine Corps captain who deployed twice, including to Afghanistan, Gerry Sims, like Coach Wooden, believes strongly in service and in servant leadership. “In the Marine Corps, we call it ‘leaders eat last,’” he explains. “If you’re responsible for a team, you take care of your team first, yourself last.”

Sims served as an officer in the 1st Intelligence Battalion at Camp Pendleton, California

Sims grew up in a military family, moving frequently and attending many schools during his childhood. Joining the military himself was never a given, he says. But soon after graduating from Purdue in 2009 with a degree in management, he thought about his career aspirations and decided he’d be missing something if he didn’t serve.

In 2011, he joined the Marines as an intelligence officer. Seeking out leadership lessons after he was commissioned, he turned to Phil Jackson’s autobiography, then John Wooden’s, as well as Wooden's best-selling Wooden on Leadership. “I still keep those books on my shelf, and they’ve helped me gain the courage to go where I feel leadership is most needed,” he says.

He speaks movingly about what he learned and experienced during his deployments, recalling, in particular, the period when he led an intelligence team at an outpost in southern Afghanistan and worked to gain the cooperation and trust of local leaders.

“One experience I’ll never forget was working with an Afghan village elder, forming a strong relationship with him,” Sims says. “I listened, following through on my commitments and building trust with him. After that, our relationship became stronger and stronger, making him feel like it was a team effort rather than his simply following my commands.

“Our relationship helped influence those on both sides to cooperate, and as a team we fought the enemy and kept the entire area safe. Having his trust was critical to our success in keeping both my Marines and his villagers alive.” Role models like Wooden influenced his sense of team purpose, he says. 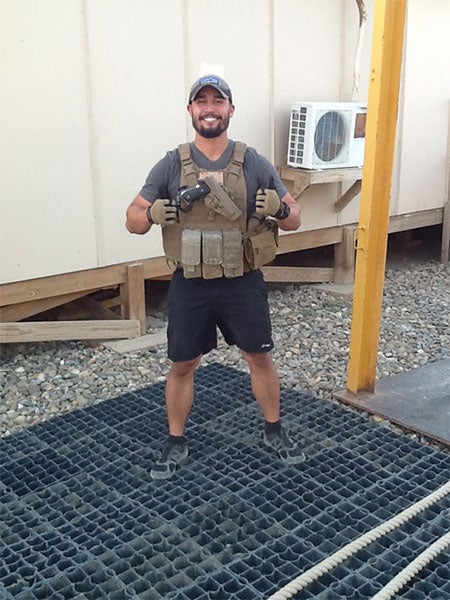 While on active duty, Sims deployed to Helmand Province, Afganistan

Now that he has transitioned from active duty (he remains a reservist), he continues to search for opportunities to serve both his fellow veterans and the wider Anderson and Los Angeles communities. He is a licensed EMT and a volunteer and mentor for several organizations, including Service 2 School, which helps veterans transitioning into graduate programs. He has also raised $6,000 for the Special Operations Warrior Foundation, which provides educational grants for injured veterans and children of the fallen.

“Leave it better than you found it” is another USMC credo he embraces as an advocate for environmental protection and a graduate of the Wilderness Medicine and Rescue course at the National Outdoor Leadership School.

Last summer, he interned with Google’s shared business services unit, where he supported the procurement operations team. “My main project focused on an operational assessment and redesign of Google’s small business supplier diversity program,” he says.

As he looks to his future after business school, Sims is considering possibilities in industry and government, maybe with the U.S. Foreign Service.

“I see a need for leadership within our diplomatic ranks,” he says. “The military teaches us to place ourselves at the most difficult points of friction within an organization. I know first hand, for better or for worse, the significant influence leaders in our government can have, especially concerning international diplomacy.

“It’s not the typical post-MBA route, but I’m exploring ways to apply my business education in the public interest.”