Is Social Enterprise the New Business-as-Usual?

Looking to Their Legacies

“We’ve had some really high-level voices speaking out in support of a bike lane on Westwood and how critical it will be for safety.”

Equipped with an on-campus bicycle repair shop, DIY fix-it stations and LED bike counters along the main route into campus, UCLA participates in L.A.’s annual Bike to Work Week and the popular Operation Firefly, an initiative of the Los Angeles County Bicycle Coalition to make cycling safer at night. In the fall of 2017, award-winning UCLA Transportation launched Bruin Bike Share, part of the larger Bike Share Connect network in Santa Monica, Beverly Hills and West Hollywood. This makes it easy for UCLA Health staff based in Santa Monica to use pedal power to travel to campus.

“Our Healthy Campus Initiative integrates well with the UCLA Grand Challenges of climate change and mental health because the overall goal is wellness in body and mind — our health depends on environmental health,” Katz says. 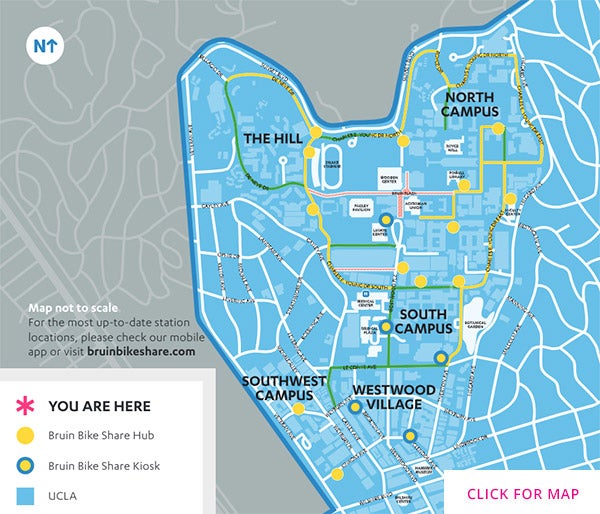 Katz founded the UCLA Sustainable Resource Center and serves on the executive committee of the Luskin Center for Innovation. She is on the advisory boards of Sustainable Works and the Green Business Council of Southern California, as well as on the steering committee of the USGBC Resilience LA Initiative, the built environment advisory board of LA Cleantech Incubator and the leadership team of Path to Positive Los Angeles. She is championing statewide collaboration and best practice sharing through the California Higher Education Sustainability Conference Steering Committee.

In 2015, for the sixth installment of L.A.’s popular urban cycling event CicLAvia, co-founded by fellow Anderson alumnus Aaron Paley (’85), Katz invited 8 80 Cities founder Gil Penalosa (’84) to lecture on the concept of healthy mobility. Penalosa, who is also an Inspirational 100 alumnus, is former commissioner of parks in Bogotá, Colombia, and revolutionized that city’s venerable open streets cicolvía initiative — which was the inspiration for L.A.’s now iconic version, first produced by Paley’s company Community Arts Resources in 2010. A community engagement expert, Penalosa completes the triumvirate of Anderson MBAs reaching outside their traditionally siloed sectors to achieve healthy urban mobility. “I’m very proud of him as a fellow alum,” says Katz.

“There’s been a kind of a renaissance with a lot of people realizing all the health benefits to cycling,” says Katz, who in 2010 completed a full Ironman distance triathlon. Of CicLAvia, she says, “I think it’s a great way to expose people to what the world should look like!”

Meanwhile, Westwood ranks among L.A.’s 10 worst locations for auto collisions involving bicycles. Yet proponents of a bike lane have faced opposition from those who claim it would put a dent in business. The Daily Bruin reported that between 2002 and 2013, there were 52 bicycle accidents on the stretch of Westwood Boulevard south of campus. Los Angeles City Councilmember Paul Koretz has opposed the development of a bicycle lane and wanted to strike it from the city’s official Mobility Plan 2035, although Los Angeles’ City Council ultimately kept it in the plan.

“We’re doing what we can on campus,” says Katz, “and we’re trying to work with the city to build the infrastructure around the campus to make biking safer. We’ve had some really high-level voices speaking out in support of a bike lane on Westwood and how critical it will be for safety.”

UCLA’s formal plan for traffic mitigation dates to the 1984 Olympics. One of the university’s fastest-growing initiatives focuses on making the campus and its environs friendlier to alternative modes of transit. UCLA, a leader in transportation research, has a drive-alone rate of 50.7 percent — but that’s lower than the county average of 73 percent. And the new UCLA Trip Planner is designed to expose commuters to a range of easy “alternative” transportation options, like carpooling.

“We’ve been able to get about half of our staff and 80 percent of our students to commute via sustainable means like bus, bike and walking,” Katz says. In the future, she says, she hopes for even more.

Read more about campus sustainability initiatives that may surprise you!

As representatives of the public, private and nonprofit sectors, Nurit Katz (MBA/MPP ’08), Aaron Paley (’85) and Gil Penalosa (’84) are working toward the same sustainability goals for their cities. In the first of three stories about UCLA Anderson alumni who are putting business sense into healthy urban mobility, we profile Katz, UCLA’s first chief sustainability officer.
Follow Us: