Anderson Inspirational 100 alumnus Gil Penalosa (’84), the former commissioner of parks in Bogotá, Colombia, is founder of the nonprofit organization 8 80 Cities in Toronto. His work in Bogotá helped make that city famous for its ciclovía open streets initiative, emulated by cities around the world — including Los Angeles — that close streets to vehicle traffic and give them over to cyclists, pedestrians, wheelchairs and skaters.

“Community engagement is, first, about determining that something is going to be a plus and not a minus.”

A community engagement expert, Penalosa guides municipal leaders and other partners as they create the ideal parks, trails and urban spaces to promote walking and biking — what he calls “healthy mobility.” He is also chair of the board of World Urban Parks and heads his own consulting firm.

In the 1990s, Penalosa expanded Bogotá’s ciclovía, which dates to the 1970s, from a few miles and a few thousand people to more than 75 miles and 1.7 million people every Sunday of the year. “This is not just an issue of recreation,” Penalosa says. “One of the main benefits is social integration. In big cities, we don’t know each other, we don’t meet each other as equals. One of the few places where we meet each other as equals is the ciclovía.”

Penalosa has taken his message of healthy and sustainable mobility to more than 350 cities on every continent. The premise of 8 80 Cities is that if you design urban spaces for people ages 8 and 80 — “as an indicator species,” as Penalosa says — you will necessarily provide sustainable amenities for every age. The litmus test is whether you’d be comfortable letting an octogenarian go for a walk in your city with your third-grader without worrying about the safety of either.

In recent years, healthy mobility has found its way to the sprawl of Los Angeles — thanks in part to Penalosa. 8 80 Cities organized the Union Station Visioning Festival here in in 2013, initiating a plan to improve historical and cultural connections downtown by enhancing the pedestrian and cycling networks through and between nearby communities.

L.A.’s periodic CicLAvia was co-founded and inaugurated in 2010 by Anderson alumnus Aaron Paley (’85), who happened to meet Penalosa in Guadalajara, where Penalosa was launching an open streets initiative. Paley had started his L.A.-based for-profit Community Arts Resources (CARS) years earlier and, after meeting Penalosa, took the reins of grassroots efforts already underway to start a Bogotá-style open streets event that now occurs quarterly in neighborhoods across L.A. county. 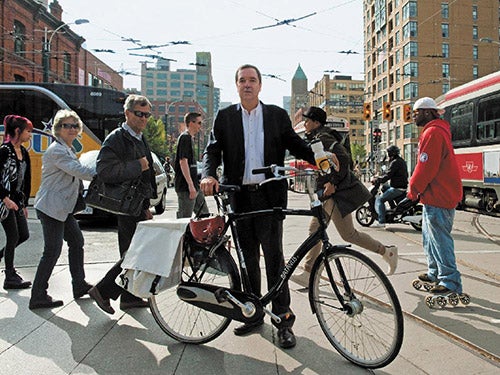 In L.A., the social integration Penalosa preaches might be the biggest hurdle to healthy mobility. The benefits of meeting as equals through CicLAvia, he says, could be augmented if schoolyards doubled as public playgrounds and gathering places, and points to New York City as a model. He believes L.A.’s Mayor’s Office could emulate such a transformation, and he sees ripe opportunity for MBAs in municipal government.

Consider market share, he says: If a new park is opened, it doesn’t send another one “out of business.” L.A.’s regional Park to Playa plan to connect a number of state, county and city parks by pedestrian paths from South Los Angeles to Marina Del Rey, for instance, might be the “emerald necklace” that could link those barren, interstitial swaths of concrete fellow alumnus Paley sees as our next big obstacle.

“Community engagement is, first, about determining that something is going to be a plus and not a minus,” Penalosa says. To convince community stakeholders that value is added by a project, planners need to arrive at public meetings with a blank page, not a finished proposal, he says.

8 80 Cities starts with community surveys that result in solutions residents ask for, like pedestrian toolkits and the Doable City Reader, a guide to sustainable “low-risk, high-impact” interventions that average citizens can execute. The organization has also formed partnerships with cities like Copenhagen, San Jose, California, and St. Paul, Minnesota, for exchange projects funded by the Knight Foundation.

“It’s easier to find the millions to build a public park than it is to find the thousands to make it work,” says Penalosa.

As representatives of the public, private and nonprofit sectors, Nurit Katz (MBA/MPP ’08), Aaron Paley (’85) and Gil Penalosa (’84) are working toward the same sustainability goals for their cities. In the third of three stories about UCLA Anderson alumni who are putting business sense into healthy urban mobility, we profile Penalosa, who has advised decision-makers in more than 300 cities how to create vibrant, healthy communities for everyone, regardless of age, gender or socio-economic status.