At Home in L.A. and True to Himself, Ice Cube Reflects

On Board for Good

Growing up in South Central Los Angeles, rapper Ice Cube never thought his name would resonate outside his neighborhood.

“We thought we were gonna be locals forever,” he says, speaking for himself and fellow members of the hip-hop group N.W.A., whose unvarnished music about street life in L.A. shocked the world with its graphic honesty. “We thought professionals came from New York. But we were true to ourselves and the world recognized that.” 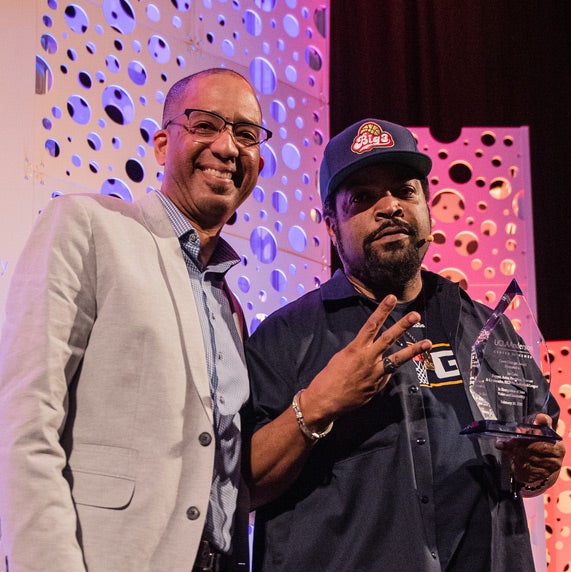 Jay Tucker (’09), executive director of the Center for MEMES, with musician, writer, director and producer Ice Cube, co-founder and CEO of BIG3

Ice Cube, now globally famous as an award-winning musician, actor, producer, director and co-founder and CEO of the BIG3 professional 3-on-3 basketball league, recently received another recognition: the 2020 Game Changer Award, presented by UCLA Anderson’s Center for Management of Enterprise in Media, Entertainment & Sports (MEMES) for influential business leadership. He joins past winners that include producer Jerry Bruckheimer, Quibi founder and co-founder of Dreamworks Jeffrey Katzenberg and Dodgers CEO Stan Kasten. The award was presented by MEMES executive director Jay Tucker (’09), who calls Ice Cube “the living embodiment of innovation.”

After being presented the award in front of a standing-room-only audience, the 2020 Game Changer chatted with UCLA Anderson adjunct professor and MEMES board member Jeff Moorad (B.A. ’78), who chairs Morgan Lewis’ global sports industry initiative.

Highlights of their conversation: