UCLA’s latest Hollywood Diversity Report shows that women and people of color who work in film and television are better represented than in the past. But, the 2019 report also shows, their numbers still don’t proportionately reflect the U.S. population.

Is this a “pipeline” problem? Or is the pipeline leaking as talented people weary of the institutional obstacles that prevent their advancement in fields where they’re underrepresented? Or both?

A partnership between UCLA Anderson’s Center for Management of Entertainment, Media & Sports and Howard University launched last summer with the goal of increasing talent in the career pipeline. Sponsored by AT&T, where UCLA Anderson alumnus John Stankey (’91) is now CEO of AT&T’s WarnerMedia, and championed by Lionsgate vice chairman and fellow alumnus Michael Burns (’92), the partnership represents industry executives’ commitment to sealing the pipeline leaks.

The program brings Howard students to UCLA for the Center for MEMES’ annual six-week summer institute, exposing them to the entertainment industry capital through major players like Lionsgate, Disney and NBC. “This partnership addresses a persistent challenge that affects the entire entertainment ecosystem,” says Jay Tucker (’09), executive director of the Center for MEMES. “The summer course and the internships give students an opportunity to discover the countless career pathways in media, entertainment and sports.”

The first group of Howard students completed capstone projects for Fender and the CW Network, attended the ESPYs and met executives from Los Angeles-area sports franchises, Hollywood studios, technology companies and early-stage ventures. Alumni of the pilot program, most of them now juniors or seniors at Howard, can look forward to help from MEMES in securing full-time internships in L.A. this summer.

Burns, whose company hosted some of last summer’s internships, says, “Greater diversity and inclusion make our industry stronger and our films and television series better. Not only are we creating opportunities for the students in the program, but they in turn are creating opportunities for us to make our workplace more diverse and our storytelling richer and more varied.”

Maiyah Phelps, who participated in the program as a senior, is already launching into an entertainment career following her summer internship at Lionsgate, where she worked in the production and development department of the studio’s motion picture group. Phelps majored in theater at Howard and minored in business administration. When she entered the MEMES summer institute, she says she “knew Lionsgate possesses a great portfolio that includes popular movies and TV shows that we all love to watch,” but her knowledge of the business side of entertainment was minimal.

Working on a capstone project at NBC Entertainment with other summer institute students, she met with executives to discuss trends and media insights regarding primetime series. “We were charged with dissecting research, and ultimately participated in a presentation with the research team showcasing a soft pitch of original new show ideas based on our findings,” says Phelps. “This project definitely opened my eyes to different career options within entertainment, because throughout the process, the NBC team invited our team to ask questions about anything. We learned about the spectrum of roles and careers of people who create a primetime series.”

She says that a key lesson from the program was that “word of mouth can grow a small business into a big business at a fast rate.” Phelps is an entrepreneur who launched Speak Into Xistence, an apparel brand that she’s developing into a platform for original creative content.

The program heightened Phelps’ self-awareness, too. “I’m more interested in marketing than I thought I was,” she says. “The Integrated Marketing course led by Jae Goodman and Chris Gebhart introduced me to a new side of marketing, and I’m super intrigued. I now look at marketing as an opportunity to exercise my creativity and promote my own brand in a way that excites me, and also reaches and captivates the end consumer.” 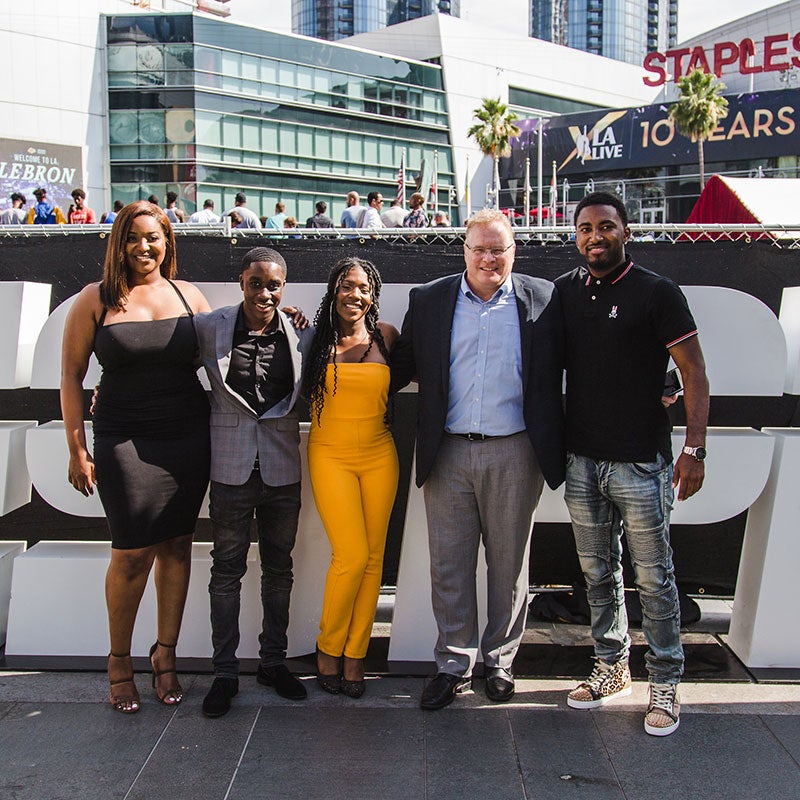 Three months after her internship, Lionsgate contacted Phelps to offer her a full-time front office position, which she accepted. “I knew that I wanted to stay in a company that I could see myself growing at and continuing to learn from,” she says. “I feel blessed to have been offered this opportunity.”

Another program participant, Cortez Hardrick, now a Howard senior, tells an equally enthusiastic story about his summer experience: “It felt like a big family more than a traditional school program. The professors took time to get to know us, students in the class were friendly, the campus was beautiful and the list goes on.”

Hardrick hails from Detroit, and has interned in real estate (a field he remains interested in) and banking. “I’ve participated in sports since I was six years old,” he says. “I wanted to go to the NFL. After my transition to college, I wanted to own a football team.” Last summer, he learned that “the sports industry is a bigger business than I even imagined.”

Hardrick, whose football scholarships are helping to fund his education, did his summer capstone project for Steinberg Sports & Entertainment and interned in Lionsgate’s worldwide TV and digital distribution division, where he says he was stunned to find executives open to his ideas. Now, when he watches Lionsgate series online, he has an insider’s knowledge of what goes into getting them streamed on major platforms.

He says he got a “fast education in who you know. Being close to the action is vital.” He taps both his Howard University alumni network and his growing list of UCLA contacts. He returned recently to attend MEMES’ annual Pulse conference and found himself talking casually with executives who introduced themselves and chatted him up before he realized he was face to face with a company founder or high-profile industry influencer. “I liked their humility,” he says.

“I love L.A. and this program helped me easily make the decision to move there to begin the next chapter in my life,” he says. “I’m from the other side of the United States but it felt like home while I was there.”

Entertainment isn’t the only industry whose workforce lacks diversity. Tech, finance and a host of other fields need to catch up, too. New talent enters the pipeline every day. The Center for MEMES’ partnership with Howard University (and perhaps future partnerships with other HBCUs) connects young talent directly with the industry teams and executives who can grant the access and opportunities to seal the pipeline leaks.