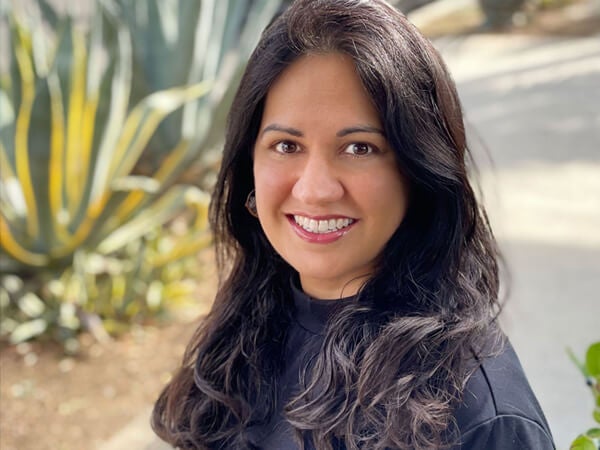 Shaila Chopra, MGM’s vice president of international television distribution for Europe, Middle East and Africa, advises those interested in careers in entertainment to not be too narrow in their vision of a potential career path, be open to different opportunities. “There are just a limited number of opportunities in entertainment ... It really is for each individual to evaluate what it is you want to do, what you want to accomplish and what you are willing to do to get there,” she says.

Striving for a Diverse Business Community

One of the reasons Shaila Chopra (’09) even considered joining MGM is that she’s a huge James Bond fan. “I love Bond,” she says. “I love the classic Bonds with Sean Connery, but I also love our newer Bond films with Daniel Craig. Skyfall is probably my favorite Bond film of all time. It was actually what got me thinking about MGM.”

Chopra is MGM’s vice president of international television distribution for Europe, Middle East and Africa. Her Bond-love led her to look at the company’s website, where she saw a job listing. A connection she’d made months earlier put in a good word, and she joined the entertainment giant. The global focus of her work gives her rare insight into the viewing habits of an international audience. Asked if there was one show that proved popular overseas that caught her off guard, she says, “The one that surprised me that is just a perennial favorite is Little House on the Prairie. It speaks to the value of doing period pieces because they don’t really become dated. It’s just a very wonderful, sweet story.”

Chopra recently talked with Jordan Barillas (’21), the VP of career development for UCLA Anderson’s Entertainment Management Association and an intern with MarVista Entertainment.

Q: To get a sense of how you found your way to your role at MGM, can you describe what your responsibilities are and, more important, how your career has evolved since you graduated from UCLA Anderson?

My first role after I graduated was with William Morris Endeavor. They had launched a new team called strategic consulting, on the heels of doing a big deal with Hasbro and Discovery. It gave the group the institutional support to pursue similar deals and to go after other corporate clients, as opposed to traditional clientele like actors and writers.

When that group disbanded, I made my way onto the research team at WME, and that was an amazing learning experience. I will say to anybody, if you have a chance to do a stint in research, go for it. Those roles can help lay the foundation for how to approach problems in a data-driven world.

Pokémon was a small company but a gigantic brand. And the job seemed, in some ways, very narrow: to distribute this vast library of one very focused franchise, because they’d been churning out an episode a week for 20-plus years and a movie a year for 20-plus years.

When I took the job, it was very much constrained to traditional linear TV deals. I only had a handful of markets. But I found that there was interest in expanding distribution. So it became the most amazing opportunity that just happened to fall in my lap. I think a lot of good things that happen in our careers are luck. But that doesn’t mean that we don’t prepare, right?

It gave me the chance to do some cool things, like launch their digital distribution from scratch. So that meant doing the first deals with Hulu, Amazon and Netflix, which were incredibly successful for both parties. From there, I went on to launch their EST TVOD distribution and get that content onto Apple, Google and Amazon. Because it was such a small company, I had to do everything, soup to nuts. I had to work closely with the post-production team to make sure that we were able to deliver content and dubs to spec. I got to do the deal making. I got to do the strategy. But I actually had to execute and get involved in operations.

Q: You said you were really passionate about international distribution, specifically. What was it that drew you to that space? Was it the challenge of venturing into new markets or was it something about the internationalization of content?

A big factor was that I loved working in entertainment. Before I came to Anderson, I was at Pixar Animation Studios. I worked on the production finance and strategy teams. I loved production, and I could totally see myself going back into the production space. But I was really feeling pigeon-holed as an accountant and I thought nobody could see me as anything else. I felt like no matter how hard I tried to network, develop myself, put myself out there, I wasn’t getting any traction. That was my motivation for going to Anderson. When I left Pixar, I really said, “Okay, where do I want to land in entertainment?” And I felt that marketing and distribution were really interesting areas.

Q: As you’ve been able to move through different companies, how have you balanced becoming a specialist with remaining flexible and continuing to learn?

When I feel like I’m not getting that flexibility naturally in my role, that’s when I start thinking about my next step.

At Pokémon, it just felt like my role was getting too specialized. I felt like my day-to-day was all about tackling the next promotion on the Apple store or dealing with the next delivery issue. It felt like it was time to take on something new. And, while Seattle was a wonderful place and I had wonderful friends and family and colleagues, I just missed L.A. so much.

Then I got the opportunity at MGM.

Q: Do you want to share any advice with current MBAs who are interested in a career in entertainment?

Internships and networking were, in my experience, the most important things. It was the way I was able to get my first job out of Anderson. Gregoire Gensollen (’06), who is an amazing alum, hired me as an intern at Lionsgate, and he recommended me for the job at WME. Just leaning into that network, doing what you can to get one-on-one time with alumni and, of course, doing the internships — those are the things that made a difference for me. And, although I don’t know how it is in the era of COVID-19, I suspect not a lot has changed in that regard.

Q: What do you share with younger employees and mentees within the company as they start their careers?

Generally, my advice is to not be too narrow in your vision of a potential career path, be open to different opportunities. There are just a limited number of opportunities in entertainment. It does, in many ways, still function on the apprenticeship model, right? There are so many people in entertainment that still start their career as an assistant. And somebody may need to do that, regardless of their degree. It really is for each individual to evaluate what it is you want to do, what you want to accomplish and what you are willing to do to get there. That’s why I kind of urge everyone to try to think as broadly as possible about the potential opportunities and paths that are out there.

Q: What are some considerations for managing a team with diverse people in different locations, and the different ways that they’re coming to the group?

My honest answer is probably going to seem a little silly, but it’s true. The most important thing — because the team is based in London — is to wake up earlier and to start my day right away. Working internationally requires a lot of flexibility. It is not something you want to do if you’re kind of rigid about your time or your schedule. The other really important thing is, people are people. All people require the same level of understanding and sensitivity and kindness. This is even more important to keep in mind when your team is far away. It can start to feel like people are names on a screen or just a video that you’re speaking to. It was always really important that when the team was in L.A. or I was in London to try to find time with each member of the team, even if just for a coffee or a quick walk to get a couple errands done. Just to have time to talk to people one on one and get to know them.