A team of UCLA Anderson Master of Financial Engineering students — Class of 2019’s Juan Ferreyra Máspero, Nik Iashvilli and Monika Tran — came in first place at the ninth annual University Trading Challenge (UTC) held in Boston in early November, defeating teams representing schools from all over the country. The team also won best performance in two out of four challenges, while Máspero received the award for Top Individual Performance.

“The University Trading Challenge is a great platform to test your quantitative acumen, fast-paced thinking and understanding of the financial markets.”

The competition featured graduate and undergraduate students seeking careers in the financial and wealth-management industries. Inscrutable judges and last-minute schedule or format changes are hallmarks of case competitions, which means teams need to adapt quickly. This is the first time the UCLA Anderson MFE team has won UTC; it was only the second time UCLA has sent a team there.

The MFE team was first selected to participate in the annual Rotman International Trading Competition, a three-day simulated market challenge. Achieving the best result at that 17-year-old competition in the history of Anderson’s MFE program, the team advanced to the UTC. 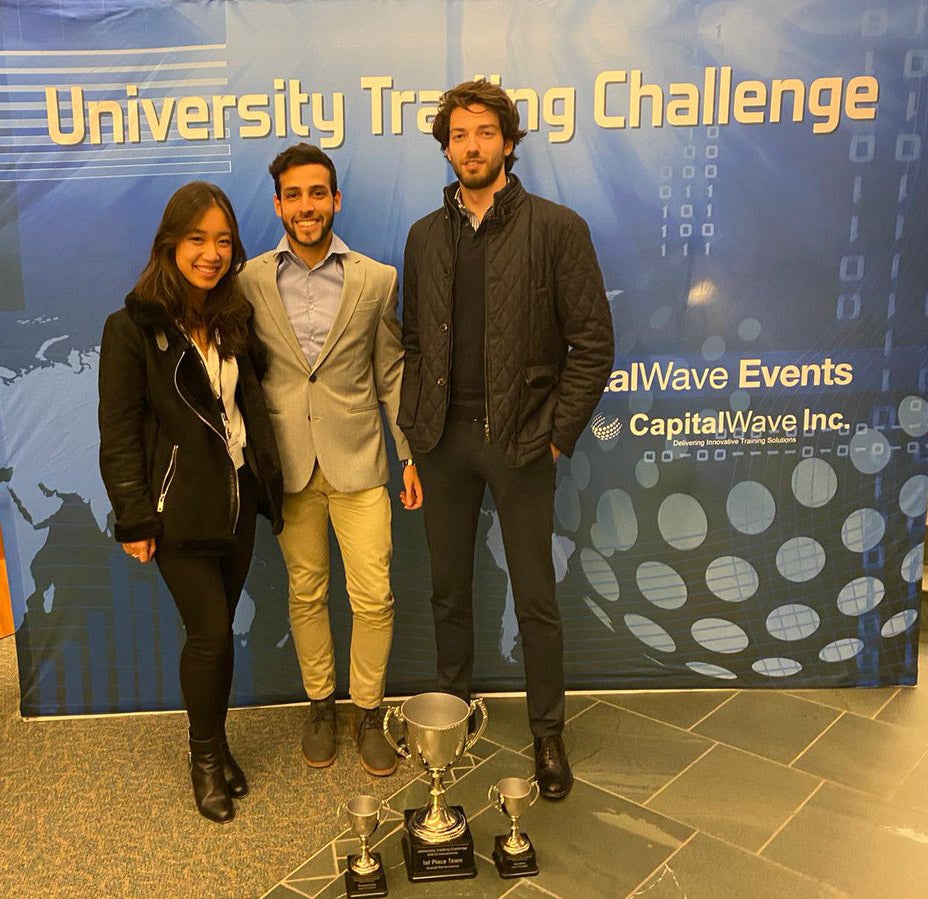 The Real Market Trading Challenge portion of the competition started a month before the live competition. The students decided to use what they were learning in their MFE classes to help form quantitative strategies for daily trading activities, which involved waking up every day at 6:00 a.m. to be ready when markets opened at 9:30 a.m. in New York. Although the team did not top the charts in terms of profitability, they won this portion of the competition, with the judges telling them that it was not only the profits that mattered but also the RaRoc, Sharpe Ratio, Sortino Ratio and Portfolio Alpha/Beta. They outperformed the other teams in managing the risk exposure, and this leveraged their score of first place.

The in-person competition started with team presentations conducted during actual foreign exchange trading time. “This meant that while everyone else would trade, each team took turns leaving their desks to present,” says Tran. The rationale of the organizers: “Eventually, at your day job, you will have to go away from your desks for some client meetings, too.”

This was a different type of presentation for the team, as they had only eight minutes to pitch the judge their whole idea and four minutes for questions and answers.

“It was quite difficult to suddenly shorten our presentation. Initially, we were told that we would have the entire 15 minutes,” says Máspero. “As we presented, we could hardly read the judge’s expression. To our surprise, once the timer rang, the judge said, ‘Guys, I have bad news ... your idea was so different from the other teams. But I loved it!’”

The organizers asked the team to encourage future classes of Anderson MFE students to participate in the competition and suggested that next year Anderson send two teams. “One of the organizers asked that we present our idea to the rest of the participants, and shared with us that in the nine years of UTC, ours stood out as one of the most novel quantitative ideas they had seen,” says Iashvilli.

The team, who will graduate with their class of 81 on December 13, credits their experience in competitions as well as working with Professor Valentin Haddad to run through ideas prior to the competition. “He confirmed our strategy and suggested some methods to help us separate our team from the rest,” says Tran. “Utilizing our Bloomberg lab, we managed to get the data necessary for our analysis in the investment banking part of the competition.”

“We really enjoyed this experience and would encourage anyone to participate,” Iashvilli says. “If you’re interested in financial markets and are excited about how they react to global or regional events, this is the perfect challenge for you. The University Trading Challenge is a great platform to test your quantitative acumen, fast-paced thinking and understanding of the financial markets.”