A Data-Driven Strategy for Teaching

In the 1962 book How to Get What You Want Out of Life by 23 Successful Men, Gerald Loeb opined about his frustrations with the so-called success manuals of his day. “Most of this material did not ring true to me,” he wrote of the countless business books on his shelf. “It encourages you to assume whatever disguise is best calculated to please the man you are trying to impress or sell or influence. My own experience counsels the reverse of this. Unless you represent yourself openly as you are, any headway you make will be very transient.”

While I never had a chance to share a highball with the renowned investor and creator of his namesake business-journalism honor, I have a feeling Gerald would’ve especially enjoyed this year’s Loeb Awards Preliminary Judging Welcome Reception.

“We do not teach PR and media in business school, so for early-stage startups to have access to the Loeb journalists is incredible, real-world experience.”

Set at a private home atop the Hollywood Hills, the type of scenic venue that has become something of a signature for the Loeb kickoff, journalists from across the country who serve as preliminary judges were greeted on March 24 by hors d’oeuvres and cocktails, panoramic views — and a fast-pitch “competition” among members of the Venture Accelerator at UCLA Anderson .

The concept behind this new addition to the program was pretty simple: Building a successful startup is as much about anticipating what will go wrong as what will go right. And nobody asks tougher, more probing questions than a poolside terrace full of seasoned business reporters and editors — especially after a couple glasses of chardonnay.

I know from experience — first, as a journalist covering entrepreneurs for over a decade, and now as someone who advises them — that entrepreneurship is a no-nonsense endeavor.

You can try to “fake it ’til you make it,” as some of today’s success scribes would have you believe (and of whom Loeb probably would have been equally critical), but unless you “represent yourself openly as you are,” as he prophetically stated nearly six decades ago, you’re unlikely to get very far, whether it’s with media, investors or consumers.

So, how did our experiment fare?

Anderson’s Venture Accelerator was created in 2016 to serve as a launching pad for Southern California’s proverbial next big things. Based in the business school’s Rosenfeld Library, the 10,000-square-foot facility not only provides 24/7 co-working space, conference and breakout rooms, a pitch venue and other resources, but also access to an extensive network of experts, mentors and investors. Every six months, a new cohort of 10 to 12 startups, in industries ranging from life sciences to real estate, sets up shop at the Accelerator, with a goal of, well, accelerating their growth — culminating in a widely attended showcase for investors. 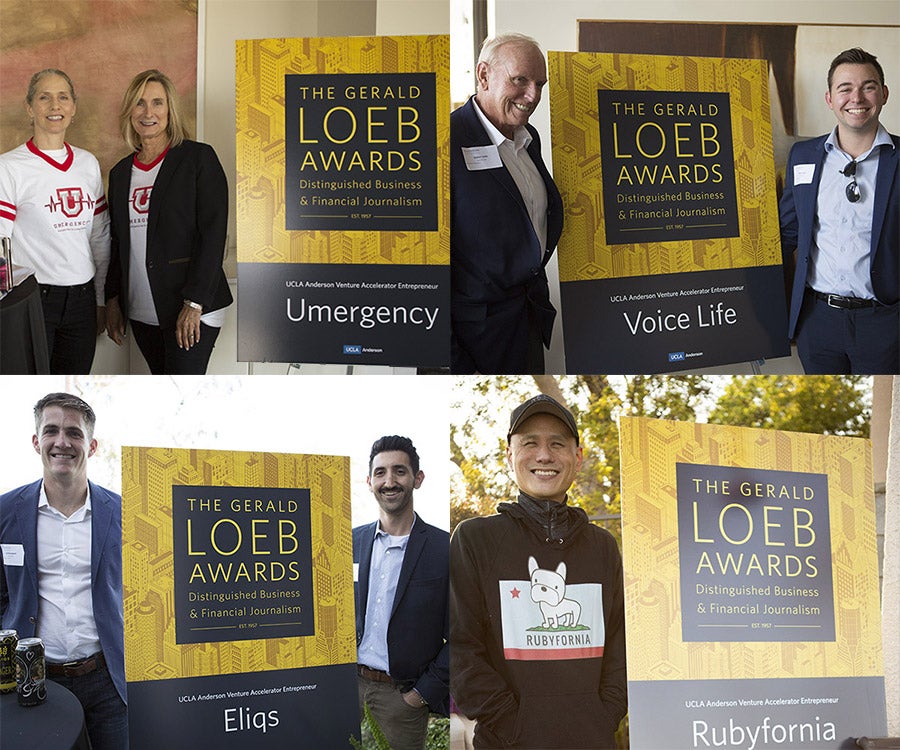 Since its inception, one bigger-picture goal has been to build a bridge between the Accelerator and the Loeb Awards — an efort to spotlight the forward-thinking concepts percolating at Anderson and on the greater UCLA campus, while leveraging the invaluable real-world business expertise of the Loeb judges and providing the Accelerator startups with access to some of the very journalists they hope one day to encounter on their journeys.

Led by Trish Halamandaris, the Accelerator’s director, and program manager Janet Chung, along with Jonathan Daillak, executive director of the Loeb Awards, we identified four Accelerator startups for the pitch competition:

UMERGENCY, an app that connects college students and their families during a serious medical event or other emergency

VOICE LIFE, which is developing both a fast-charging cell phone case and a Wi-Fi phone-charging solution

ELIQS, a maker of custom-label beer for events, in partnership with craft brewers

RUBYFORNIA, an app that allows dog lovers to create personalized “dogmojis” that can be used in mobile messages and printed on T-shirts and other merchandise

“Journalists want to know what cutting-edge people are doing and where creativity is going. Loeb judges are volunteering their time, so they’re clearly interested in journalism and business.”

“The opportunity for our startups to pitch their concepts to an esteemed group of journalists is a win-win for our Accelerator,” said Halamandaris. “We do not teach PR and media in business school, so for early-stage startups to have access to the Loeb journalists is incredible, real-world experience.”

A Master Class in Press Relations

As a longtime Loeb Awards judge, Accelerator mentor and entrepreneur-in-residence, I was charged with helping the teams prep for the event — something of a media/startup whisperer, to make their stories as compelling as possible for my Loeb colleagues. And, as with any new experiment, you’re never quite sure how it’ll go. Would the cured salmon, charcuterie and mezze station prove to be a bigger draw for the judges, many of whom had just stepped off cross-country flights to be there?

But with the backdrop of a golden sunset on downtown Los Angeles, each Accelerator team in attendance stepped to the front and made its case. The result was livelier-than-expected banter between the two groups, which carried well into the post-pitch party.

Pallavi Gogoi, chief business editor for NPR, who was judging for the second time this year, felt the relaxed environment provided a unique opportunity for the Accelerator startups. “Using this group to figure out the best way to launch their products is very smart,” she said. “Of course, the products themselves have to be viable in the first place, because no amount of marketing will make them successful in the long term. For the founders, the ability to explain their product in an accessible way is key. If they understand it well — its uses, pricing and how it will beat current competitors — it should be a breeze to answer questions from seasoned journalists.”

The pitches also provided a window for the Loeb judges — journalists by day, after all — to see new business ideas on the horizon, according to Dean Murphy, a veteran Loeb Awards judge and associate masthead editor of the New York Times. “It’s great to see the kind of stuff people are coming up with,” he said. “Journalists want to know what cutting-edge people are doing and where creativity is going. Loeb judges are volunteering their time, so they’re clearly interested in journalism and business. They get exposed to people who are literally on the ground creating new businesses. That’s very valuable.”

For their part, the Accelerator teams walked away thankful for the experience at such an early but crucial stage in their growth. “Being part of the Loeb pitch — and hearing everyone’s questions and comments — was invaluable,” said Gail Schenbaum, co-founder of Umergency, which was the top vote-getter at the event. “Where else would I have the opportunity to share my story with so many journalists at one time?”