The Global Context of Doing Business

Christine Loh brings a wide-ranging worldview to the classroom 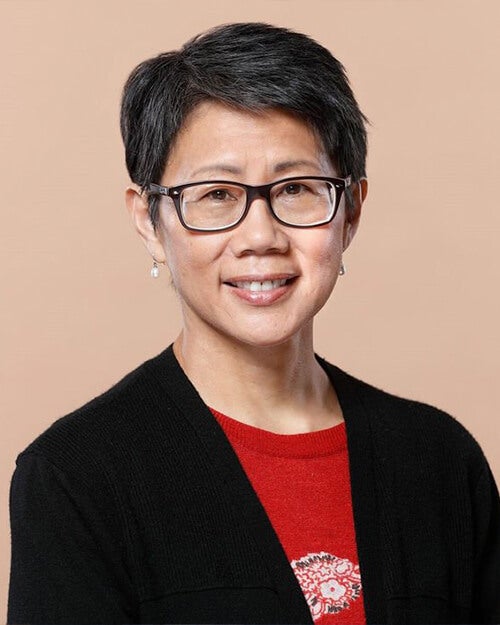 Christine Loh Kung-wai, SBS, OBE, J.P., Chevalier de l’Ordre National du Mérite, is a former Hong Kong Legislative Councillor, founder and CEO of Civic Exchange, founder of the Citizens Party and founder of Hong Kong Human Rights Monitor. She teaches in the Division of Environment and Sustainability at the Hong Kong University of Science and Technology and she is chief development strategist at its Institute for the Environment. Loh is a lawyer by training and has helped to establish several nonprofit organizations in Hong Kong related to the environment, equal opportunity, arts and culture, and human rights.

Christine Loh, visiting professor at UCLA Anderson’s Center for Global Management (CGM) and former minister of the Hong Kong S.A.R. government, brings a unique perspective to the MBA students who enroll in Non-Market Risks and Understanding Politics: The Global Context of Doing Business, the course she has taught in the winter quarter each of the last four years.

“When you’re looking to grow your business and make it profitable, political and geopolitical issues can come out of left field that you have to respond to,” Loh says. “My job is to introduce a framework for students to understand the histories, cultures and political structures of different countries in a way that can help them navigate these issues.”

It’s a perspective that reflects both Loh’s worldview and her wide-ranging resume — which has included high-profile experiences in the worlds of law, business, politics, nonprofits, media and higher education, during which she’s promoted pro-environment, pro-women’s rights and pro-democracy policies in her native Hong Kong. Her environmental work is also well-regarded in mainland China.

“I’m an expert at being a generalist,” Loh quips. “And precisely because of my varied experience, I see that many things are connected. If the government isn’t on board with major societal issues that affect everyone, like welfare, public health or climate change, nothing is going to work. But government has to work closely with other stakeholders, including business. So I believe in engagement — bringing people together to understand how we can address difficult issues.”

“Universities are amazing places. They are reservoirs of knowledge and experience of all kinds, and they allow you to be in touch with younger people and to see what they’re experiencing. It was a great privilege for me to have an opportunity to design a unique course at Anderson.”

Born in Hong Kong when it was a British colony, Loh was raised in a multicultural family — her father’s side from Shanghai, her mother’s side Cantonese — with a Danish stepfather after her parents divorced. She spent part of her childhood in Europe and was educated in both Hong Kong and England, earning a law degree in England. She never practiced law, instead spending the first decade-plus of her career as a commodities trader, initially in Beijing at a multinational commodities trading company with headquarters in New York.

But Loh never lost interest in the law and public policy. In Hong Kong, she became active in an “armchair critic” social group: “young people getting together wanting to right the world,” as Loh describes it. She emerged as a leading spokesperson for the group, which developed positions on a host of policy issues, from public health care to the return of Hong Kong’s sovereignty from Britain to China. “Being involved in that group gave me insights into issues I had never thought about,” Loh says. “And I got hooked on the idea of solving problems that affect millions of people.” In 1992, when Loh was offered an appointment to the Hong Kong Legislative Council, she jumped at the chance to enter the political arena. Loh stood for election in 1995 and reelection in 1998, winning handily both times.

In her nearly nine years as a legislator, Loh made her mark by fighting the establishment. She led a highly charged and ultimately successful effort to change the law on land inheritance rights for indigenous Hong Kong women in a region called New Territories, allowing them to legally inherit land for the first time. Later, she passed a landmark environmental law to stop land reclamation and overdevelopment, which posed an existential threat to Hong Kong’s famous Victoria Harbor, one of the world’s busiest.

In 2000, after deciding not to run for reelection, Loh founded Civic Exchange, a nonprofit public policy think tank aiming to use research and dialogue to inform policy and engage stakeholders in addressing major challenges in Hong Kong. In 2012, she returned to a policy-setting role when she accepted an invitation to join the Hong Kong Special Administration Region government as undersecretary of the environment. Over the next five years, Loh worked with her counterparts in mainland China on issues that included air quality, shipping emissions, conservation and biodiversity.

“I love what CGM is doing and what it offers to the students.”

Loh’s connection to UCLA runs deep: She has family members who are alumni, and during her years in Civic Exchange, she participated in multiple collaborations with UCLA and Anderson administrators and faculty. So, when she was invited to create a course and teach at UCLA Anderson upon leaving the government, she jumped at the chance. “I think universities are amazing places,” Loh says. “They are reservoirs of knowledge and experience of all kinds, and they allow you to be in touch with younger people and to see what they’re experiencing. It was a great privilege for me to have an opportunity to design a unique course to be taught at Anderson.”

World events that have unfolded since Loh first taught her global management course in early 2018 only reinforced its premise. “You had President Trump saying he was going to impose a tax on steel from Canada and Europe, and then imposing tariffs on all kinds of Chinese goods, so we talked a lot about the U.S.-China relationship and its effect on businesses in 2018 and 2019,” she notes. “Then in 2020, along came COVID, and then social movements like Black Lives Matter, as well as the growing problem of climate change. These are major issues causing enormous changes in the world that impact business.”

Beyond her teaching, Loh has actively participated in events held by CGM, whose faculty director, Senior Associate Dean for Global Initiatives Christopher Tang, is a supply chain expert originally from Hong Kong. Since 2020, she has moderated or participated in a series of CGM discussions on topics that have included the global impact of COVID-19, global protests and climate policies, as well as served as guest speaker for CGM’s Shenzhen/Hong Kong global immersion course, which focuses on tech-driven transformation and innovation in the Greater China region. Loh has also co-authored a number of articles with Tang. “Christine’s guidance, support and engagement have been invaluable,” says Lucy Allard Nelson (’06), CGM’s executive director.

When she’s not in Los Angeles, Loh works at Hong Kong University of Science and Technology, bringing together stakeholders on public policy issues as a chief development strategist at the university’s Institute for the Environment. She also sits on a host of international boards, ranging from commercial and nonprofit bodies to private foundations.

This winter will mark the fifth and final year of her visiting professorship, but not the end of Loh’s association with UCLA Anderson. “My family remain very committed Bruins, and I’m in L.A. often because they are there,” she says from her home in Hong Kong. “I love what CGM is doing and what it offers to the students. So even if I’m not formally attached as a professor, I expect the relationship will continue.”