Let’s start with the “who.”

He’s Adjunct Professor Bill Cockrum, award-winning teacher, mentor, advisor and friend to generations of UCLA Anderson students, not to mention a long-time colleague to many faculty, staff and fellow members of the school’s Board of Advisors.

The “what” is his immeasurable impact on the Anderson community, not just in these roles, but through his philanthropic efforts, both as a major donor and as an evangelist for Anderson.

The “how” and the “why”? Those take a bit more explanation.

Cockrum’s relationship with the Anderson community began when he recruited its students. During 25 years in the financial services industry — where he spent time as a senior officer at Becker Paribas Inc. (formerly A.G. Becker) — he hired graduates from the nation’s top business schools, including Harvard, Virginia, Chicago, Northwestern, Stanford and UCLA. Eventually, an Anderson alumnus-turned-Becker-employee, Robin Grace Warren (’82), brought Cockrum to the attention of now Senior Associate Dean and Professor Al Osborne, who approached Cockrum to gauge his interest in teaching a course on entrepreneurship.

“I said I’d try it,” Cockrum says. “So, we put together a course in entrepreneurial finance and piloted it in the winter of ’85.”

The course drew rave reviews from students and earned the new faculty member a teaching award. Cockrum continued teaching entrepreneurial finance and created other courses, such as a class in ethics, a related course on real-world challenges that leaders face, and an investing course that became the Student Investment Fund. 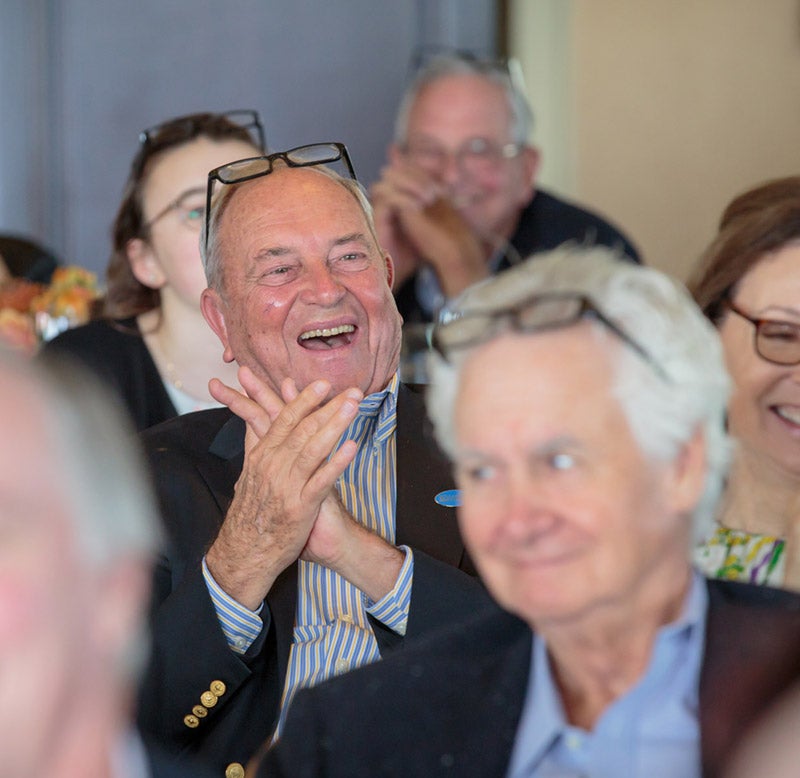 Around the same time, Clay La Force, who was then dean of Anderson, supported the hiring of several business professionals as lecturers and adjunct professors. In addition to Cockrum, George Geis and Bill Yost (among others) joined during that time. Meanwhile, the Harold and Pauline Price Center for Entrepreneurship & Innovation was expanding.

According to Cockrum, La Force felt that Cockrum and Osborne were a perfect combination for the Price Center, the former’s organizational and financial expertise a good match for the latter’s big-picture approach to building the center.

“In 1986, the Price Center was growing, and Al asked me to work with him to build a board of advisors,” Cockrum says. The board has since grown to 30 members, with Cockrum serving continually as vice chair, providing continuity while the center added programming and recruited additional faculty. Along the way, he and Osborne added Elaine Hagan (’91) as executive director of the Price Center, creating the team that would guide its growth over the decades.

John and Marion Anderson’s original $15 million naming-rights gift made a seismic impact on UCLA’s Graduate School of Management. The gift mandated much more than a name change from “GSM” to “AGSM,” it facilitated a move from a nondescript building on the eastern edge of campus to a state-of-the-art, newly constructed facility near Sunset Blvd. to the north. The school raised additional funds for the Pei Cobb Freed & Partners-designed complex through gifts from the likes of Leon and Toby Gold, Peter Mullin, Eugene Rosenfeld, Jim and Carol Collins and Clark Cornell, whose names adorn Anderson’s buildings. Meanwhile, Dean LaForce, the school’s Board of Visitors and the Price Center tapped an array of contacts and donors to “name” Entrepreneurs Hall while also securing contributions to support the Price Center. With funding in place, the Price Center leadership team carved out its roles. Osborne focused on faculty, research initiatives and curriculum development, Hagan handled program management and Cockrum served as a faculty advisor to the student-led Entrepreneur Association. 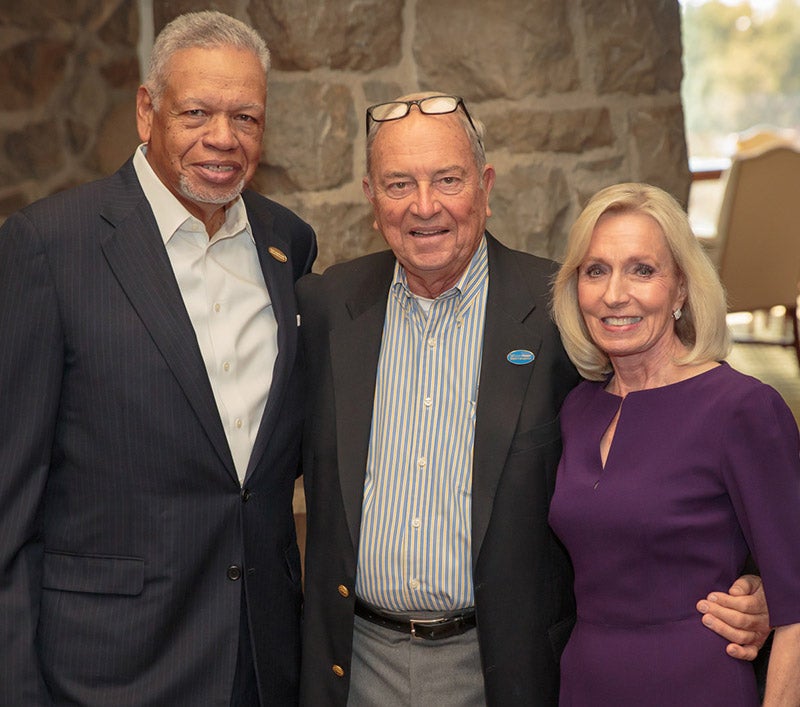 Cockrum’s interest in students — their careers and their studies — defines his Anderson involvement. Ten years ago, a writer sat in on one of his courses and now vividly recalls Cockrum’s opening the session with a query: “OK, who still needs a job?” A bit blunt? Sure. But no one’s ever accused Bill Cockrum of beating around the bush.

In preparing for this story, the same writer again sat in on one of the popular professor’s classes and, once again, the class began with an assessment of which second-year students were still looking for work and which first-years were looking for internships. It is a consistent and defining ritual: Cockrum identifies which students need assistance, then he and his colleagues tap their vast networks, making calls and introductions on behalf of Anderson students.

When Cockrum became involved at Anderson, its finance faculty included a number of outstanding scholars, including Fred Weston, Richard Roll, Eduardo Schwartz and Michael Brennan. Cockrum knew that with the quality of the finance faculty and the school’s students, he could help increase the number of the school’s graduates working in the nation’s top financial institutions.

“I came from Wall Street and knew a lot of people. I used those connections and would help the students secure jobs with the major investment banks, commercial banks and investment management firms in New York City, Los Angeles and San Francisco,” Cockrum says. “That all developed in the ’90s. We had pretty good success and a fair amount of penetration, and many of those people are still in financial services in one form or another. They also remember who helped them and, because of that, are loyal to this institution.”

Over the years, Cockrum has served as a bridge between Anderson’s academic mission, represented by its students, and the world outside Anderson. UCLA Anderson’s Student Investment Fund (SIF) perhaps best distills the relationship between Cockrum and Anderson’s students.

Created in 1987 with gifts from Provident Investment Counsel and Kayne Anderson, the 18-month competitive course and attendant fund is designed to provide an opportunity for students to apply the academic investment theories they learn in the classroom to a real-world milieu. The SIF represents the bridge between theory and the practical workings of the capital markets, giving students invaluable experience in managing the now $3 million fund. What’s more, the investment earnings generated by the portfolio have funded millions of dollars in student fellowships at Anderson.

Although SIF was created more than 30 years ago, the fund continues to provide students with new lessons. A glance at the fund’s latest annual report reveals several, including the challenges of determining what “value” means when analyzing a company, what happens when transitioning from a group-managed portfolio to individual portfolios and the importance of independent thinking. The student managers attest that lessons in that last category came in part from their time spent with the president of PRIMECAP Management Company, alumnus Joel Fried (B.A. ’84, ’86), who emphasizes the dangers of getting caught up in a “herd mentality.”

Cockrum has overseen the SIF from the beginning. But true to Anderson’s shared success ethos, he hasn’t done it alone. One of his hallmarks is bringing in experts, many of whom make themselves available outside class hours to advise students. Cockrum also sees to it that the second-year MBA students mentor the first-years, thus introducing a leadership component to the course.

We’re left with the “why.” Bill Cockrum could have devoted his time and his generosity to any number of organizations or causes. In the parlance of the school’s marketing efforts: Why Anderson?

Cockrum’s explanation begins with a bit of his personal history. He was born during the Great Depression. World War II and the Korean War helped define his formative years. “Half my college fraternity fought in Korea,” Cockrum says. “It was just different. My generation matured a lot earlier and had a different economic outlook than today’s students have.” Upon graduation from Harvard Business School, Cockrum turned down several job offers, including positions at McKinsey and General Motors and a case writing apprenticeship toward a Harvard doctorate. He joined an investment bank in Chicago, where he worked in fixed income and trading securities. He headed investment banking for five years, advised clients and became the chief financial and administrative officer, becoming one of the six top officers of a 3,000-person organization. Cockrum’s career took off, affording him and his family well-earned financial security. Eventually, Al Osborne came calling.

“I thought I’d try (teaching) and it turned out that I liked the people here,” Cockrum says. “The community was accepting, number one; but, number two, there was a need for instructors who could translate academic theory into practice, sharing examples from their own experience.”

Eventually, the school asked Cockrum if he would continue on a full-time basis. Cockrum recalls his reaction. “I said to myself, ’Look, I’ve accumulated capital, I’ve got things pretty well organized, my consulting business is doing fine and my family is taken care of.’ As a human being, you’ve got to find a place where you can give back and make a difference, and I decided to make UCLA that place.”

Setting about to make that difference immediately tangible, Cockrum made the momentous decision to pay back the salary he’d earned at Anderson. And he has continued to invest in UCLA Anderson in just about every way possible; to date, he’s donated more than $10 million. He explains, “It didn’t make sense, if I were going to give back and try to make a difference, to get paid for doing that. I’ve done more than I expected, and obligated more than I earned in a financial sense, but the idea was to invest in this institution. And I’ve certainly received a lot more than I expected as well.

”The net of it all is that when I leave here and eventually pass away, the world is going to be better, not because of what I did, but because of the more than 8,000 students whom I’ve taught here, what they’re doing in the world and how they are going to improve it.” Cockrum also plans to leave the school an estimated $30 million future gift through his estate. He hopes that this will similarly inspire others to include UCLA Anderson in their estate plans as well.