As a youngster, Gretchen M. Humbert (’89) marveled at the dioramas of gorillas and grizzly bears at Los Angeles County’s Natural History Museum, never imagining that she would one day become the venerable institution’s chief financial officer.

Gary Ginstling (’00) began playing clarinet in elementary school and eventually performed professionally. But he found his true calling on what some musicians call “the dark side,” as executive director of the National Symphony Orchestra in Washington, D.C.

Kate Motonaga (’97) worked at a diverse array of companies and government entities before a recruiter suggested she consider becoming chief operating and chief financial officer at the Museum of Contemporary Art in downtown Los Angeles. “Your background shows you can learn different markets,” the recruiter told her. “What we need is someone who is good at the technical stuff.”

For these Anderson MBAs, the realm of nonprofit management has served up challenges and no small measure of contentment. All three say they feel an affinity for the mission of their organizations, an improvement over bottom-line-driven corporate work that can sometimes sap the soul. And, they say, the collaborative management style they learned to practice at Anderson has helped them overcome the inevitable trials of nonprofit work.

“We were encouraged to work with our classmates, as opposed to compete against them,” Humbert says of her years at Anderson, “and it has definitely helped.” 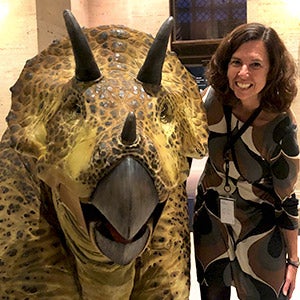 After years of managing finance and accounting at a handful of companies, including film production and internet design and development enterprises, Humbert understands the life of a CFO.

“Most of the companies where I worked I helped to sell,” she says. “I sold myself four times out of a job, basically.” After arranging the 2012 sale of the last of these companies, online apartment-listing service Rent.com, to a private equity firm, Humbert mulled shifting her career trajectory. “I wanted to have an affinity for the mission or the service,” she says.

Serendipitously, a headhunter called to say the Natural History Museum of Los Angeles County, the largest museum of its kind in the western United States, was seeking a CFO.

Humbert grew up in the San Gabriel Valley and had vivid memories of visiting the museum with her mother and with classmates. She also had two sons — one in middle school and one in high school — whom she had taken to the museum.

After her years at startup-minded tech and entertainment ventures, the museum’s old-style bureaucracy shocked her system. Employees were still processing expense reports and invoices on paper, sometimes in triplicate, even as the museum touted its mission of conservation. Humbert implemented an electronic system to process reports and bring the museum into the 21st century.

“The museum was a little bit stuck doing things the same way,” says Humbert, who also manages the museum’s IT. “They were looking for someone to bring for-profit experience to the museum.

“As a CFO, you sometimes have to deliver a message that’s not so popular,” she says. “I see myself as a middle-woman, brokering between departments and people. I tend not to create battles. I tend to resolve them.” 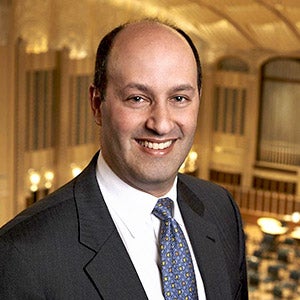 Ginstling grew up in northern New Jersey in a musical family. His mother, a pianist, had studied at Juilliard, and his father, a tax lawyer, was an amateur musician. Ginstling began playing clarinet as a boy. After getting a Master of Music at Juilliard, he moved to Los Angeles and performed professionally, as an extra with the Los Angeles Philharmonic and with the New West Symphony in Ventura County, north of Los Angeles.

But UCLA Anderson beckoned. Ginstling recalls thinking, “I could be another pretty good clarinet player or go to business school and work on the dark side.”

When Ginstling emerged in 2000 as a newly minted MBA, the dot-com wave was cresting.

“Companies in Silicon Valley were hiring MBA grads, even clarinet-playing MBA grads,” he says. Ginstling became a product marketing manager for Sun Microsystems, a pioneering hardware and software developer that was one of the best-known brands around.

Soon after, the bubble burst, and Sun, like many other tech giants, began laying off employees. After eking out three years at Sun, Ginstling decided in 2003 to return to the arts and soon secured a job as executive director of the Berkeley Symphony. While there, he maintained his performing career as principal clarinet in the New West Symphony.

He subsequently worked as director of communications and external affairs for the San Francisco Symphony, where he created the organization’s first family concert celebrating Dia de los Muertos, the day of the dead, in 2008.

He next became general manager of the Cleveland Orchestra in Ohio and then had a four-year stint as chief executive officer of the Indianapolis Symphony Orchestra. Under his leadership, the orchestra’s ticket sales grew by more than 80 percent and gifts and grants increased 45 percent.

In August 2017, the National Symphony Orchestra in Washington named Ginstling its executive director. Soon after, Gianandrea Noseda, a noted Italian maestro, began as the orchestra’s music director. Under Noseda’s baton, the orchestra has enraptured audiences at the John F. Kennedy Center for the Performing Arts, its home base, and Carnegie Hall.

“The National Symphony has always been an orchestra that aspires to be counted among the great orchestras of America. This is a strong time for us, with our new conductor and longer-term vision,” Ginstling says. “Ticket sales are up, and giving is up.”

Audience development remains the biggest challenge. “Our society has changed so much over the last decade,” Ginstling says. “The legacy institutions that rely on the public are finding it harder and harder to attract them.”

The orchestra is expanding its repertoire and reach by performing free concerts in Washington neighborhoods and collaborating with hip-hop artists. 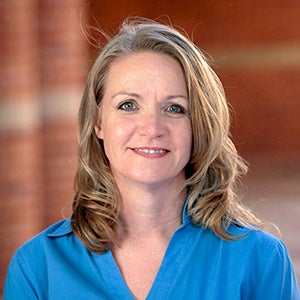 For a decade, the Museum of Contemporary Art in Los Angeles struggled financially and endured controversy over turnover of directors, curators and board members. None of the uproar dissuaded Kate Motonaga from signing on as COO, CFO and treasurer in early 2018.

Motonaga, who grew up in the Boston area, had previously worked in finance for an array of entities in construction engineering, wholesale distribution and corporate consulting as well as for a water district and a district attorney’s office. She had worked for a couple of nonprofit organizations and served for two years as CFO of UCLA Anderson. She has an affinity for the arts, given that her daughter is a cellist.

Still, she was surprised when a recruiter called to invite her to apply for the MOCA jobs, considering that she had no professional background in the arts.

Her UCLA experience has helped. “At Anderson, everything was team-based,” she says. “I learned to listen to other people, to sit back and hear other points of view.” Anderson’s cross-disciplinary approach and emphasis on critical thinking also benefited her. She realized how important marketing was to the museum and her budgeting process.

Along those lines, Motonaga has a suggestion for Anderson: Offer more classes on nonprofit management. For example, she was not as well prepared for the level of involvement from nonprofit boards, which have a fiduciary duty and provide a significant amount of contributed income, so members have a very personal connection to the museum. “You want them to stay engaged and enthusiastic,” she says. “As with all boards, the politics within the board are very important.”

Motonaga says she is also dealing with fallout from changes to federal tax laws. Donors are designating less money for the museum in their wills. And small donations are harder to come by.

Challenges aside, working in the nonprofit world has satisfied Motonaga’s entrepreneurial, social and business sides. “It has been a real joy and an area I want to stay in,” she says. “Nonprofits are very scrappy: twice the work with half the people. You definitely make a choice to be somebody who wants to bring something to the world.”