Written By
By Paul Feinberg

As UCLA Anderson honored and celebrated the accomplishments of its most recent graduates, Interim Dean Al Osborne used the occasion to remind the Class of 2019 that “our democracy is being challenged, not so much by bad people but by the silence of good people.

“I ask you,” he said, “as UCLA Anderson graduates, to step up, to stand up, to speak out.”

Osborne’s words set the tone for UCLA Anderson’s 2019 commencement ceremony, which saw a number of speakers issue challenges to the graduates to use what they’ve learned to create a better society. The celebration recognized the school’s full-time, fully employed and executive MBA classes, along with those completing their doctoral degrees. Osborne’s message also invoked a familiar refrain from the long-time faculty member’s year as dean.

“I truly believe that there is no group of people better equipped to take on this challenge than the full-time class of 2019, a group that not only embraces positive change,
but drives it.”

“I have been a big believer in what I’m going to call ‘cultivating your voice, cultivating your presence,’” Osborne said. “If you listen and you work, I think there’s a chance for good to overcome evil. I want you to be the best versions of yourselves over time, become powerful [and] courageous. Use your voice — your identity, presence — and the courage to speak truth to power. If there were ever a time people needed to have voice, it is now.”

Moments later, Osborne introduced keynote speaker Bernard J. Tyson, chairman and CEO of Kaiser Permanente, as “an innovative, dynamic leader whose national health care organization is leading the way to better health for its members and, more broadly, its communities.”

Tyson opened his remarks by noting that he had recently attended the graduation ceremony at Morehouse College, where he had the pleasure of seeing his middle son, as he put it, “finally get his degree.” Tyson noted that the commencement speaker that day, investor Robert Smith, had pledged to pay off the student loans of the Morehouse graduating class. “I just wish I could do something like that,” the Kaiser Permanente executive laughed, dreaming that someday he’d be able to make such a pledge. “But not today.”

Tyson then got serious. “You chose this path because you believe in something bigger than yourself and in contributing to a better society. You made a commitment to work to eliminate inequities and injustices that impact the lives and dignity of all people,” he said, echoing the sentiments of UCLA’s legendary Coach John Wooden, who once said “you can’t live a perfect day without doing something for someone who will never be able to repay you.”

“You made a pact to engage and transform the communities we all live in and care about, to lead innovation and to make a transformative impact on lives of many people that you will know and many people you will never know,” Tyson told the graduates. “I say to you today, never are the opportunities greater than right now for you, individually and collectively, to follow through on the promises you’ve made to all who are counting on you, whether they know it or not.” 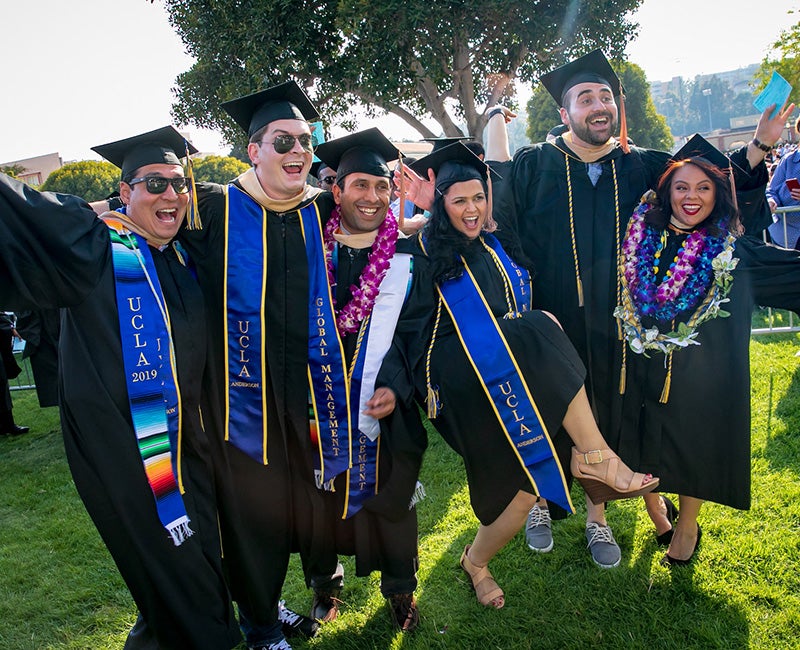 Tyson went on to describe key issues the country faces, including poverty, gun violence and sexism, his theme mirroring the approach he’s taken at Kaiser, illuminating the idea that companies and individuals must seek success not only for themselves, but as a way to do right by all.

“Don’t ask for permission to improve the lives of the people and communities you’ve pledged to serve. Instead, march through the doors of red tape, make bold moves and usher in access for your communities to be served,” he said. “Building what you want starts with changing what you have. Recognize that you are the change you seek. When you look at all these forces, remember you can adapt to them, you can embrace them, you can respond to them in ways that will better your life and better the lives of our country.”

After Tyson’s remarks, Professor Francis Longstaff, Anderson’s Allstate Chair in Insurance and Finance, led the presentation of the doctoral degrees to nine candidates. “The Doctor of Philosophy degree is the highest degree awarded by the university,” Longstaff said. “The candidates receiving this degree deserve our greatest respect and admiration for what is truly a monumental accomplishment.”

As per Anderson tradition, the full-time MBA, FEMBA and EMBA programs alternate which group's degrees are awarded first during the commencement ceremony. This year, the full-time MBA students went first, followed by the FEMBAs and then the EMBAs. Clara Jaques (’19) — whose parents are both UCLA Anderson alumni — was chosen by her full-time classmates to speak on their behalf. Her words channeled one of the Anderson’s core values.

“As business leaders in 2019, we are ‘hashtag blessed’ with a remarkable amount of technology and opportunity, but we also carry the responsibility of using these tools for the public good,” said Jacques. “I truly believe that there is no group of people better equipped to take on this challenge than the full-time class of 2019, a group that not only embraces positive change, but drives it.” 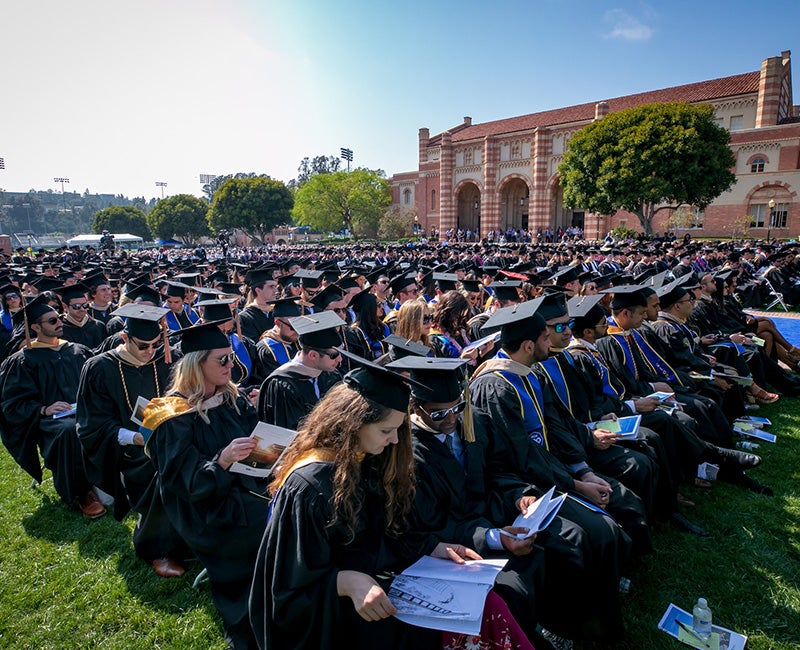 Jacques also touched on a theme that echoed some of Dean Osborne’s favorite themes. “As a class, we have already demonstrated our strong ethical code. As first years, we immediately created a safe space to discuss our reactions to the Charlottesville tragedy and, this past winter, our various conference organizers worked tirelessly to ensure diversity in panelists and speakers. I have no doubt that we will transfer these instincts into our future leadership roles.”

Selected to speak on behalf of her FEMBA classmates, Meha Chiraya (’19) thanked the Anderson faculty and staff as well as parents, significant others, children and friends for helping the graduates achieve this milestone. She also paid tribute to the late Jenessa Shapiro, Associate Professor of Management and Organizations.

“From Leadership Foundations to Organizational Behavior, [Professor Shapiro] taught us the importance of overcoming our internal biases to be stronger and more impactful in the work we do together,” Chiraya said. “She might have agreed with social justice activist Valarie Kaur, who said: ‘Courage is only possible in community. When you find yourself afraid and you don’t know if you can survive it, close your eyes and breathe and remember the one who loves you. Love will make you brave.’ Professor Shapiro, we love you and we miss you.”

The day’s final speaker was EMBA graduate Allison Hill (’19), who quoted the poet Mary Oliver: “What do you plan to do with your one wild and precious life?”

“We paid for these degrees — with our time, with our sweat equity, definitely with our money — but this degree has also been a privilege and a gift,” said Hill. “And my hope for our class is that we honor this gift by going out into the world and, as we learned about in strategy class, not only capturing value but creating it; not only grabbing a bigger piece of the pie for ourselves and our companies, but making the pie bigger for everyone — through innovation, entrepreneurship, inclusivity, and leadership. My fellow EMBAs, I look forward to our next steps. And I look forward to the next chapter in our wild and precious lives.”