Written By
By Paul Feinberg

Congratulations to the winners of the 2019 Knapp Venture Competition!

On the surface, their academic interests and scientific achievements don’t suggest even a hint of commonality. She is a world-renowned immunologist whose research advanced our understanding of the functional properties of antibodies and antibody-related proteins. He is a trailblazing and award-winning scholar in the field of market science; co-author of dozens of articles on marketing research and applied statistics; an editor; a beloved teacher and administrator.

In the parlance of all true Bruins: She’s south campus, he’s north campus.

But the story of the Morrisons — Sherie, a UCLA distinguished research professor of microbiology, immunology and molecular genetics, and Don, emeritus professor of marketing — is notable not for the couple’s differences, but rather for their values, which include a desire to benefit others and spread the love they share with each other to those they cherish.

“Sherie and Don have both dedicated their careers to grappling with complex issues — and finding solutions,” UCLA Chancellor Gene Block said before presenting the Morrisons with the UCLA Medal, the university’s highest honor, during a June 11 ceremony at the Chancellor’s Residence. “Their achievements, as individuals and as partners, have been characterized by a boundless energy and real passion to serve.”

“They work as a dynamic couple around this campus, and it’s a wonderful thing to watch them in action because they represent the best of UCLA and Anderson.”

The Morrisons’ love story began in 1963 when they were both doctoral students at Stanford. Fifty-six years later, their love endures. Together, they raised two daughters (Heather Morrison Felix, who received her MBA from the UCLA Anderson School of Management in 1994 and is now program director of UCLA Anderson’s Easton Technology Management Center; and Michelle Morrison Oliva, who earned her MBA from Anderson in 1995) and built careers that took them from high-profile faculty positions at Columbia University to UCLA.

While presenting the medal, Block highlighted some of the Morrisons’ many accomplishments.

“[Sherie] has significantly advanced our understanding of how antibodies function and how we can use them to treat disease. And she holds more than 29 patents, a stunning number … I’m envious,” Block said. “Sherie’s patented antibody technology is the basis for medicines used to treat a variety of autoimmune diseases like rheumatoid arthritis, Crohn’s disease and multiple sclerosis. Her teaching and leadership at UCLA over the years have been just as stellar as her research.”

In introducing Don Morrison, Block noted how Don’s lifelong passion for sports, which was “honed as a Red Wings fan growing up in Detroit,” became a love for probability and statistics.

“That love has led Don to author or co-author more than 90 articles on marketing research and applied statistics,” Block said. “His colleagues certainly noticed his impact. Don was awarded the highest honor of the American Marketing Association in 2002, when he was named the McGraw-Hill/Irwin Distinguished Educator of the Year.”

Although his professional accolades are numerous, Don has said that his greatest professional joy comes from teaching doctoral students. “You give them roots and then wings. It’s rewarding to watch them grow as scholars,” he once said. 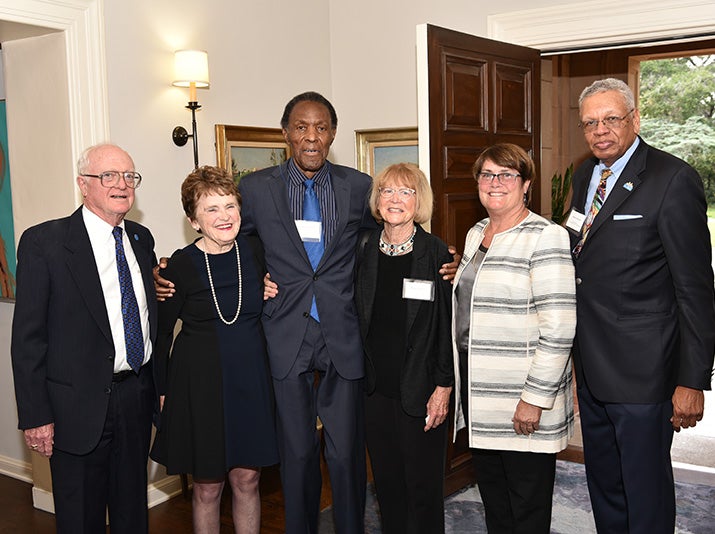 The Morrisons have furthered their impact through their philanthropy. Block noted “their bold and visionary commitment to providing opportunity” through the Morrison Family Center for Marketing Studies and Data Analytics at UCLA Anderson. Established in 2015, the center bridges theory and practice, providing data and tools to advance our understanding of consumer markets and behaviors. The Morrisons’ admiration and love for philanthropist and UCLA Anderson benefactor Marion Anderson also inspired them to give a generous gift for construction of the state-of-the-art building that will bear her name.

Sherie Morrison acknowledged experiencing a bit of trepidation a few months back when she received a call from Block and wondered, “What have I done wrong now?” Instead, she was “blown away” by the news that she and Don would become recipients of the UCLA Medal. “I still remain amazed by that honor and opportunity,” she said.

“Especially valuable to us has been the diversity of interests and experiences we’ve had here at UCLA,” Sherie said, noting the Morrisons’ relationship to athletics, the sciences and the business school. “We’ve made tremendous friendships that we feel very blessed with, so thank you all for that.”

Referencing the chancellor’s introduction, Don Morrison joked that “usually you have to die” to hear such remarks. “Gene talked of a lot of things that we’ve given, but we’ve received a lot more,” Don said. “We’ve both been extraordinarily blessed. To join the pantheon of those who’ve received the UCLA Medal is just amazing. We’re stunned and thrilled.”

“I want to congratulate both Don and Sherie, because they really are this amazing team that supports UCLA,” said Victoria Sork, dean of the division of life sciences in the UCLA College. “They support UCLA together. They’ve given three endowed chairs and every one of them is thoughtful and intended to move the Department of Microbiology, Immunology & Molecular Genetics forward.”

Speaking of Sherie Morrison’s research, Sork said, “It’s not just the patents, but the innovation in her basic science, and really trying to understand and create new advances in immune science and how systems work. Then we can translate it so we can cure cancer.”

Paying tribute to Don Morrison, his longtime colleague, UCLA Anderson Interim Dean Al Osborne called Don’s connection to people magnetic. “His Ph.D. students benefit from his ability to be a mentor. Young faculty members benefit, athletes also benefit and are better for it.”

Of the Morrisons, Osborne said, “They work as a dynamic couple around this campus, and it’s a wonderful thing to watch them in action because they represent the best of UCLA and Anderson.”

The UCLA Medal was established in 1979 and is the highest honor bestowed upon an individual by UCLA. It is awarded to those who have earned academic and professional acclaim, and whose work demonstrates the highest ideals of UCLA. Past recipients include entertainment luminaries Samuel Goldwyn, Rob Reiner, David Geffen and Francis Ford Coppola, as well as writer Toni Morrison, architect I.M. Pei, UCLA basketball coach John Wooden, Supreme Court Justice Harry Blackmun and UCLA alumna and astronaut Anna Lee Fisher.