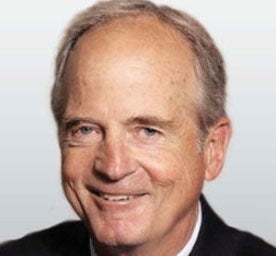 Peter V. Ueberroth is managing director of Contrarian Group, an investment and management company. He is also an owner and co-chairman of the Pebble Beach Company.

Peter founded First Travel Corporation in 1962. When he sold the company in 1980, it was the second-largest travel business in North America.From 1980 to 1984, Peter was president of the Los Angeles Olympic Organizing Committee, the organization responsible for staging the 1984 Los Angeles Olympic Games, the first privately financed Games, resulting in a surplus of $238 million, that continues to support youth and amateur-related sports programs throughout the United States.

He served as the sixth Commissioner of Major League Baseball between 1984 and 1989.He serves on the board of directors of The Coca-Cola Company, Aircastle LTD (AYR), and Easton Bell Sports.Peter graduated from San Jose State University, earning a degree in business.

While in college, he competed in the 1956 U.S. Olympic water polo trials. He has 12 honorary degrees and was Time Magazine's Man of the Year in 1984. His 1985 book Made in America was a bestseller.