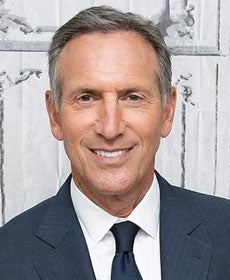 Howard joined Starbucks in 1982, when the small coffee company had four stores in the Seattle area. In 1983, he traveled to Italy and was captivated by the culture and romance of the Italian coffee bar. He had a vision to bring the Italian coffeehouse tradition to America,creating a third place between work and home. To pursue his dream, Howard left Starbucks to create his own coffee company, Il Giornale. He and a group of local investors purchased Starbucks in 1987.

The company's vision and guiding principles have been a major part of its success. These are highlighted by two of its landmark programs: comprehensive healthcare coverage and stock option grants for all full and part-time partners (employees).

Starbucks has grown to more than 16,000 stores in 44 countries with more than 200,000 partners serving 50 million customers who visit the stores every week.Under Howard's leadership, Starbucks has become one of the most respected global brands and has become a cultural icon. Throughout its growth, Starbucks has remained true to its coffee heritage by providing a connection and a sense ofcommunity for its customers.