On Board for Good

Accelerating the Rhythm of His Career

Patty Maysent (MPH ’87, ’90) describes herself as a big-picture person. A career health care strategist, she has occupied the C-suite of large health care organizations since the early 1990s, when, as chief executive of St. Jude Medical Center, she was Orange County’s youngest CEO.

Now at the helm of UC San Diego Health, Maysent still isn’t missing the forest for the trees, but she is clear on this priority: consideration of each patient individually. “This is the hub of where discoveries are made and brought to the bedside,” she says of research universities like UCSD. “That’s a critical role of academic medical systems, to accelerate science and bring it to the bedside.”

At Stanford, Maysent was a human biology major and a competitive swimmer. She pursued her MPH at UCLA because, she says, “I didn’t want to ’do widgets,’ I wanted to do something that would really touch people. The game-changer was taking an accounting class. That was really intuitive for me, I could see all the levers that drive the P&L and the organization.”

This led her to apply to Anderson, where she received an education in statistics that serves her to this day. The health care delivery industry of the 21st century demands precision, and “you need to be able to understand the data,” says Maysent. She recently returned to her alma mater as keynote speaker at Anderson’s 6th annual Healthcare Business Association conference, Vitals 2020.

Maysent was championed early by mentor Paul Viviano (MPA/MPH ’79), president and CEO of Children’s Hospital Los Angeles and a graduate of UCLA Fielding School of Public Health. Viviano preceded Maysent as CEO of UC San Diego Health, but for the previous two decades had already collaborated with her at each rung of the ladder she climbed. “It helps when you have a sponsor like that,” she says.

Appointed CEO of UC San Diego Health in late 2015, Maysent oversees a $2 billion annual operating budget and more than 9,000 employees. She previously served as chief of staff and chief strategy officer. Under her leadership, UC San Diego Health went from 55th on the Vizient Quality and Accountability Study Rankings of academic medical centers to No. 6 in just two years. 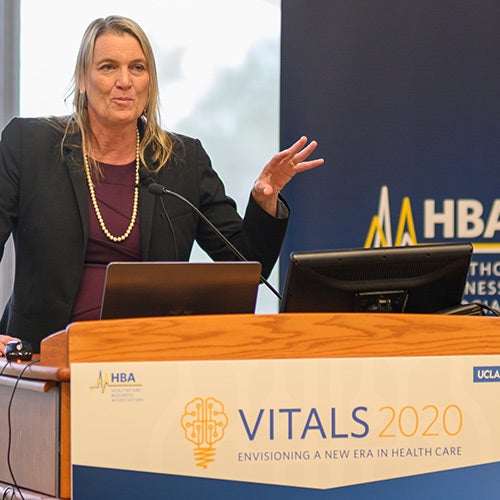 Following financial challenges that pre-date Maysent’s tenure, and the 2012 closure of failed out-of-market enterprises like a cancer center in Las Vegas, UC San Diego Health needed to rebuild. The greatest challenges for the system, though, lay in its ability to jockey for position among the region’s established health care giants, like Kaiser, Sharp HealthCare and Scripps Health, with its roster of reputable primary care physicians.

Although the university certainly touted its specializations in cancer, cardiology, ophthalmology, gastroenterology and other areas, the system couldn’t survive on specialty care alone. “Health care has changed radically,” says Maysent. So, notwithstanding the fact that clinical researchers at UC San Diego developed 41 cancer treatments that are now standard care, “Primary care delivery is essential or you can’t compete in the market.”

So UCSD focused on developing its network and found that some of the region’s top practices had not been acquired by Scripps and others because the physician-owners were fiercely independent. However, they needed access to something UCSD could offer: better payer contracts, an asset the university health system could bring to the table because the UC system’s five health campuses stand united in negotiating for the best rates. Now some of the highest ranked physicians are affiliated with UC San Diego Health.

UC San Diego Health assumes the same research, education and service mission as the public University of California system as a whole, a mission Maysent takes seriously. As of 2018, it had provided $423.7 million in annual community benefits, including uncompensated and government-sponsored care. The nation’s largest LGBTQ civil rights organization awarded UC San Diego Health a perfect score on its Healthcare Equality Index.

Among the system’s current priorities is addressing the growing need for trained staff in the area of mental health, and the San Diego County Board of Supervisors voted in January 2020 to partner with UC San Diego Health to build the 60-bed Central Region Behavioral Health Hub where UC San Diego Health is rebuilding the outdated Hillcrest hospital facility, in need of seismic retrofitting.

Maysent, who says UC San Diego’s patient base is 41% Medicaid eligible, believes the next big strides in health care will be completing the journey to value-based care and population health. In five years, she says, “The pendulum really will have swung. And we’ll have addressed the mental health crisis, too.”

What does Maysent believe is most important for MBAs specializing in health care management to do? “Get an internship, paid or not, with any health system, such as Kaiser, Sharp, or with health systems like ours — but get a sense of the business of health care. Do rotation work, go see a surgery, an autopsy, attend business strategy meetings.”