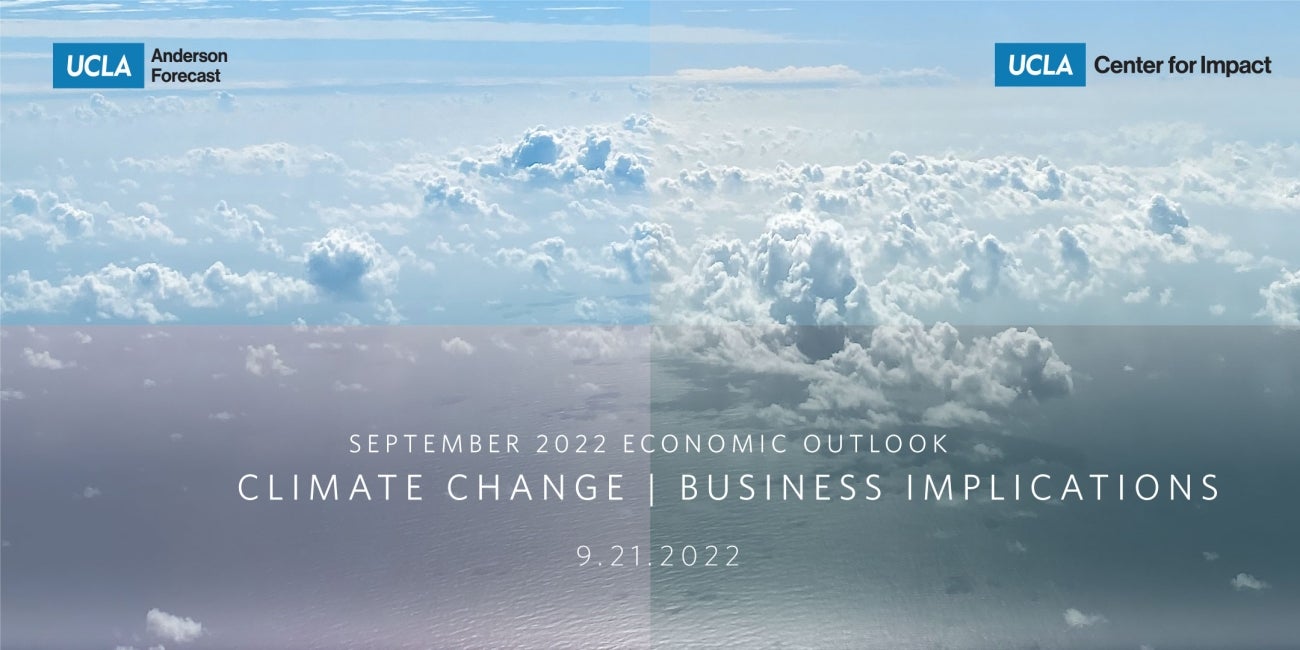 The U.S. economy is likely to muddle along with below-trend growth and continued high inflation over the next 12 months, according to the UCLA Anderson Forecast’s latest report. And while no recession is forecast at this time, Forecast economists say the possibility still exists that persistent inflation and aggressive interest rate policy will lead to a “hard landing” of the economy, potentially precipitating a recession.

In California, strength in a number of sectors will buoy the economy, while increases in defense spending and demand for technology will likely keep the economy growing. The greatest risk to the state’s robust economy remains the economic weakness in the rest of the country and in sectors such as transportation and logistics, as consumers nationwide continue to shift from goods to services consumption.

Despite mixed economic signals and competing opinions about the state of the national economy, the UCLA Anderson Forecast’s data-driven analysis suggests that the U.S. is not currently in a recession and that the chance of a recession in the next 12 months is less than 50%.

This assessment is based on several factors, including a robust labor market, strong consumer spending, an easing of COVID-19–related supply chain constraints, an increase in government defense spending resulting from geopolitical instability, and the return of manufacturing to the U.S. from overseas. Business have begun to “reshore” production or have chosen domestic expansion over expanding manufacturing capacity overseas, in response to supply chain issues and mounting geopolitical instability over the past year. That means more business investment will occur domestically rather than abroad going forward.

On the flip side, a number of factors could drive the economy into recession, including: persistent and broad-based inflation; the likelihood that the Federal Reserve will continue to aggressively raise interest rates, constraining consumer spending and business investment; consumer pessimism, usually a leading indicator of economic conditions; a downturn in housing markets related to rising mortgage rates; worsening worldwide economic conditions contributing negatively to U.S. exports; and potential labor unrest, as work stoppages and strikes may contribute to supply constraints.

“There is tremendous uncertainty about what will happen over the course of the next 12 months and through the end of our forecast horizon,” says UCLA Anderson Forecast senior economist Leo Feler. “While we have not forecast a recession at this time, the risks to the U.S. economy are asymmetric to the downside.”

The UCLA Anderson consensus forecast is that the economy will grow, on average, 1.5% in 2022, 0.3% in 2023 and 2.0% in 2024. Quarter by quarter, the UCLA Anderson Forecast expects seasonally adjusted annualized growth rates of 0.0% to 0.4% between the third quarter of 2022 and the second quarter of 2023. It is only in the latter half of 2023 that the forecast expects growth to pick up, to around 1% in the third quarter and then 2.1% in the fourth quarter. By 2024, the UCLA Anderson Forecast expects the economy to rebound and growth to accelerate slightly above long-term trends, to 2.3% to 2.5% annualized growth each quarter.

The forecast does not expect core inflation, as measured by the CPI and PCE indices, to decrease during the next two years to the 2% level experienced before the COVID-19 pandemic.

In the September 2022 forecast for California, UCLA Anderson Forecast director Jerry Nickelsburg examines the impact of the state’s recent declines in population on its economy. He notes that migration out of the state, coupled with a lack of international immigration and lower birth rates, has resulted in a historic reversal of California’s annual population gains. At the same time, California’s GDP was $3.36 trillion, which would make the state the world’s fifth largest economy if it were a country. This poses a question: Are the companies and entrepreneurs exiting California a signal that the state’s great economic run is at an end, or is this out-migration merely a spillover of the state’s prosperity into other parts of the U.S.?

In his report, Nickelsburg looks at a number of factors, including GDP, investment, job growth and relative housing prices. His analysis proves positive for California, as these data collectively refute the notion that the state is in decline.

GDP is growing, and California is chasing Germany for the No. 4 spot in the world’s GDP rankings. California households are becoming wealthier, on average, than those of other U.S. states. Investors continue to flock to the state in search of superior returns, and domestic out-migration, though it will continue for some time, is beginning to taper off because of the decreasing affordability of alternative cities.

There are several strong sectors in California, including leisure and hospitality, health care and social services, technology, and construction, each of which posted solid gains in 2021. Increases in defense spending and demand for technology will likely keep the state’s economy growing.

But there are cautions in the analysis. As a consequence of the weaker U.S. economy, the forecast for California — despite the state’s inherent strengths — is weaker than it was three months ago. While increased international immigration and accelerated onshoring of technical manufacturing represent an upside for California, the state faces a number of economic headwinds, including the continuing pandemic and domestic migration.

In spite of higher mortgage interest rates, the continued demand for a limited housing stock, coupled with the enactment of laws permitting the building of accessory dwelling units in neighborhoods zoned for single-family homes throughout the state, leads to a forecast of increased home-building through 2024. The forecast’s expectation is for 124,000 net new units to be permitted in 2022 and for permits to grow to 143,000 in 2024. Still, this low level of home-building means that over the next three years, the prospect that the private sector will build out of the housing affordability problem is nil.

In the UCLA Anderson Forecast’s June 2022 report, Professor Edward Leamer discussed the possibility of a recession caused by rising interest rates and a slowdown in housing. In an article titled “A New Way of Forecasting a Recession: Not Much to Worry About Right Now,” he examined the evidence through a statistical analysis of past recessions. His analysis concluded that it was unlikely there would be a recession in the following 12 months and, in spite of the rhetoric to the contrary, the data at that time did “not sound a recession alarm.”

Leamer’s premise is that the last three years of expansions of the U.S. economy are where one should look for symptoms of an oncoming recession, by contrasting the year immediately before recessions with the two earlier years.

In his September 2022 update, Leamer says that until now, he has been arguing that the economy has “a Wall Street problem, not a Main Street problem,” meaning that while markets for bonds and equities have been in turmoil, Main Street activities, exemplified by the number of jobs and rates of pay, have been quite healthy.

Now, however, Learmer says the housing and manufacturing sectors look troubled. But there are two reasons why this doesn’t matter much at this time: Housing since 2009 has been below the historically normal number of 1.5 million new units per year, and never in the 2 million range, as with earlier excesses. In other words, we are not overbuilt. And the share of jobs in manufacturing has declined from more than 30% in the 1950s to only about 8% now, which greatly reduces the role of manufacturing in recessions to come.

UCLA Anderson Forecast is one of the most widely watched and often-cited economic outlooks for California and the nation and was unique in predicting both the seriousness of the early-1990s downturn in California and the strength of the state’s rebound since 1993. The Forecast was credited as the first major U.S. economic forecasting group to call the recession of 2001 and, in March 2020, it was the first to declare that the recession caused by the COVID-19 pandemic had already begun.

About UCLA Anderson School of Management

UCLA Anderson School of Management is among the leading business schools in the world, with faculty members globally renowned for their teaching excellence and research in advancing management thinking. Located in Los Angeles, gateway to the growing economies of Latin America and Asia and a city that personifies innovation in a diverse range of endeavors, UCLA Anderson’s MBA, Fully Employed MBA, Executive MBA, UCLA-NUS Executive MBA, Master of Financial Engineering, Master of Science in Business Analytics, doctoral and executive education programs embody the school’s Think in the Next ethos. Annually, some 1,800 students are trained to be global leaders seeking the business models and community solutions of tomorrow.