Our Footsteps Cover the Globe

The #RunTheWorld marathon is about participation, not competition 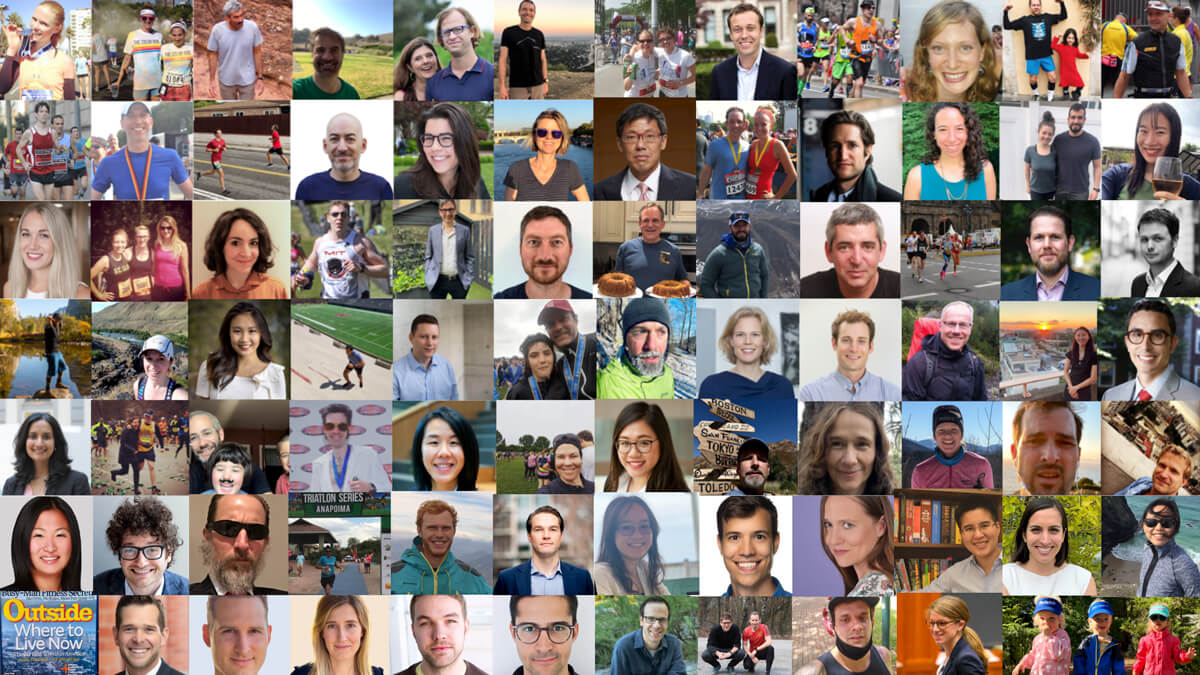 The Impact of UCLA Anderson Revealed While Preparing for Game Show

Last March, not long after Professor Jana Gallus completed the 2020 Los Angeles Marathon, the COVID-19 pandemic forced the city and the state into lockdown mode. 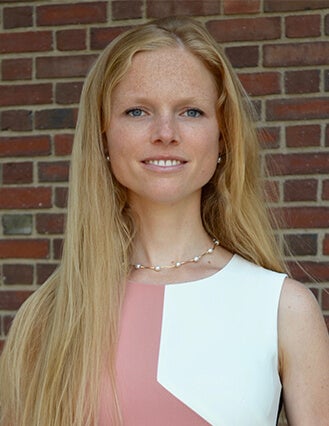 As assistant professor of Strategy and Behavioral Decision Making at UCLA Anderson since 2016, Gallus relished living in Westwood, near the campus, with her family. But with young triplets, including one child who had to be intubated during the beginning weeks after birth, the family decided to leave their high-density dwelling behind and relocate to a more isolated spot along the California coast.

Like the rest of the world, inside and outside of academia, Gallus adjusted to the “new normal.” She used Zoom to remotely teach the core business strategy class to UCLA Anderson’s full-time MBA students. She also continued with her field of study: non-monetary incentives and, most notably, social recognition-based incentives, such as awards and honors.

Working with (among others) Wikipedia, NASA and the American Red Cross as organizational partners, Gallus has conducted large-scale field experiments to discover what motivates us beyond monetary rewards. With Bruno Frey, she co-authored the book Honours Versus Money: The Economics of Awards (Oxford University Press, 2017), and her work has appeared in such journals as Management Science, Strategic Management Journal, Applied Economics, Labour Economics and Organizational Behavior and Human Decision Processes.

“People respond to incentives — monetary, such as bonuses, and non-monetary, such as social recognition,” she states. “I am intrigued by how we can design incentives that leverage people’s rich motivations and evaluate the impact on behavior in the field.”

“One big advantage to having a marathon that costs nothing to produce: anybody can join in. That allows us to bring together people from around the world.”

Gallus stayed in shape by running near her newly adopted home. During one such workout in February 2021, she floated an idea to herself: “I would really like to run another marathon this year. I could just run it by myself. But it’d be much more fun to do it together with others.”

As a veteran of several international marathons (running wherever she lived at the time, including San Francisco, Frankfurt, L.A., Zurich), Gallus knew that amid a pandemic this was a pipe dream. The most prestigious and popular races, including Boston, New York, London, Berlin, Chicago, San Francisco and Los Angeles, attract tens of thousands of runners who crowd urban thoroughfares (not to mention the tens of thousands of volunteers and spectators). All of these high-profile events have been canceled because of COVID-19.

So Gallus reached out to a few friends and colleagues to see if they would join her remotely. And the word kept spreading. Thus was born the #RunTheWorld community. Its inaugural run is scheduled to take place on March 20, 2021, the beginning of spring in the Northern Hemisphere.

The idea is breathtakingly simple: Everyone who signs up for the event at runtheworld.community runs the marathon distance of 26.2 miles (or whatever distance people feel comfortable running) on the same day. The participants map out their own unique course and then send a screenshot of their distance and time to the organizers. Unlike the major marathons, there is no entry fee.

“People want to feel a sense of agency,” Gallus says, “where we feel we have some part of our life under control. And we want to feel connected to others. COVID really stripped us of both during this past year, and so I’m hoping that knowing that you can get out there and run, and knowing that others will do it with you, will motivate and cheer up people. What’s the saying? Sports can unite us.” 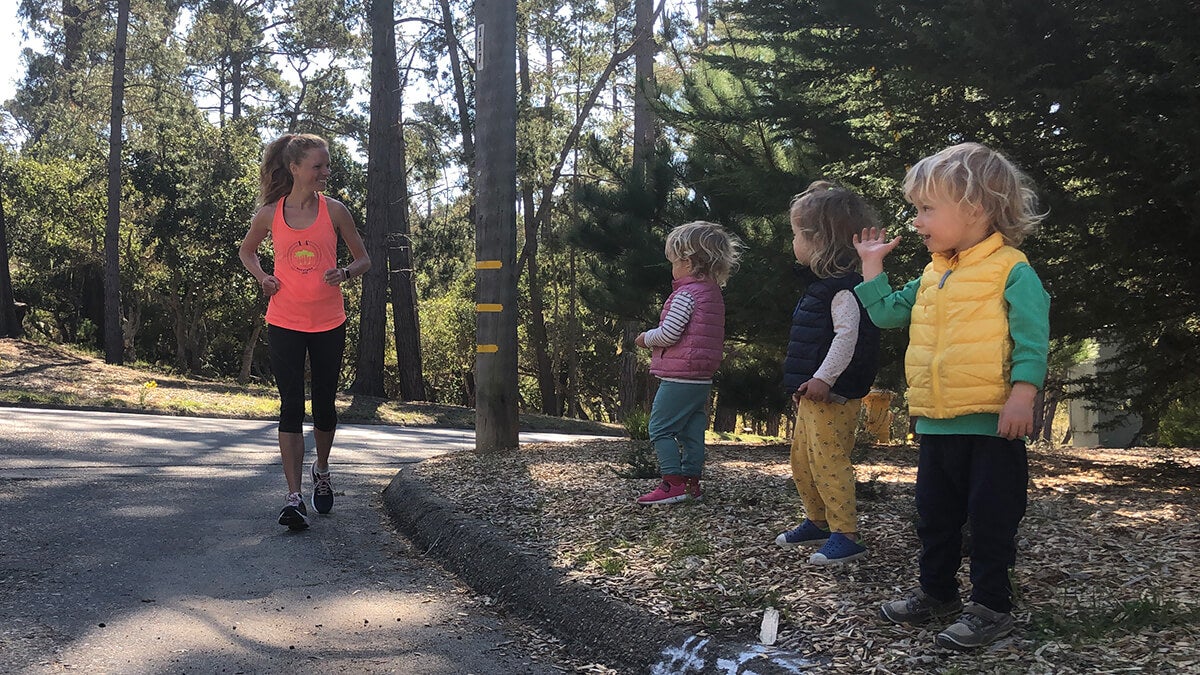 A veteran marathoner, Jana Gallus is cheered on by her three children as she trains for #RunTheWorld

Over the course of three weeks, about 200 participants from academia and beyond registered for the inaugural run, from as far away as Japan, Singapore, Australia, India, Israel, Egypt, Turkey, Nigeria, Finland, Sweden, Denmark, Germany, the Netherlands, Switzerland, France, the UK, Colombia, Brazil, Argentina and Canada — not to mention the many runners in the eastern, central and western United States, including professors from Harvard, MIT, Columbia, NYU, Chicago, Cornell, University of Michigan, Carnegie Mellon, University of Penn, Berkeley, Stanford, USC and many other universities.

The community now includes runners on all continents except Antarctica. Some have joined as international relay teams. Some are setting up local but physically distanced events around their university. Others use the occasion to aim for a personal first: their first marathon or half-marathon.

Gallus says that she enjoys seeing how the community is taking the initial idea to next levels. And that she gets to apply what she teaches her students. “There’s basically zero variable cost for us,” she says. “We can onboard anybody who wants to run. And what makes this particularly attractive is that it’s all built on direct, one-sided network effects: because there is another person joining in on the run, I’m going to enjoy this run even more.

“There is one big advantage to having a marathon that costs nothing to produce: anybody can join in,” she continues. “That allows us to bring together people from around the world. The Boston and New York marathons are exclusive races. You have to qualify for them. The competitive element is key. We’re the exact opposite because we’re as inclusive as possible. We will each be creating our own tracks. It’s not meant to be about competition, but instead about participation. People can participate in any way they can and want. They can also join us in organizing the event, and they can cheer on their friends and colleagues from the comfort of their armchair by submitting cheers via the event’s website.”

For her personal marathon, Gallus plans to run 13 or so laps around a two-mile paved loop that winds past her secluded home. “I will run into more deer than people,” she laughs. “It would be nice to finish in under four hours, as before, but the whole purpose is to get out there and have fun. So I’m trying not to think about the time.”

Gallus plans to stage another “virtual” marathon for the beginning of fall, giving more people the opportunity to join the marathoning community. That underlines the other goal behind the initiative: “to have our footsteps cover the globe. This goal serves as a nice rallying cry and makes us actively reach out to people beyond our ‘convenient’ interaction partners,” she says. “We welcome everybody with open arms.”

Cheered on by family members, Jana Gallus achieved her goal by completing the #RunTheWorld marathon in a time of 3:48:00. She reports that more than 186 runners participated in running full and half-marathons around the world, in 16 countries on five continents, from 11 to 75 years old, through deserts, snow and rainforest-like conditions. Business schools were well represented, including runners from UC Berkeley Haas School of Business, Stanford Graduate School of Business, UCSD, USC Marshall, Chicago Booth and NYU Stern. One team even spotted Dr. Anthony Fauci during their excursion. With the enthusiastic response despite very short notice of the event, Gallus is already planning the second #RunTheWorld marathon for Saturday, September 18, 2021.