A UCLA cross-campus innovation challenge created synergy for a startup

The Nur Labs team Zooms together from various time zones

UCLA is known as the No. 1 university campus for commercializing research, and widely recognized as an incubator for startups. While scientific breakthroughs can be notoriously slow to go to market, cross-disciplinary collaborations accelerate their application.

“Thanks to the vast and accessible resources on the UCLA campus — in-person as well as remote — we’re working with real scientists.”

The two professionals crossed paths thanks to the Easton Technology Management Center’s Cross-Campus Innovation Challenge — without which, Jonak says, “We would have been two ships passing in the night, and this opportunity wouldn’t have materialized.” Jonak and Liang placed second in the Easton competition. Although Liang has moved on to other postgraduate projects since lending his scientific expertise, Jonak’s current team — which includes Anderson EMBA Class of 2021’s Dr. Abhinav Chandra, an oncologist, Dr. Deepa Nagar, a neonatologist, Brian D’Souza, a technology executive, and Alan Schiaffino, a U.S. Navy officer; and Wall Street executive Aram Babikian (’20) — has applied for nondilutive National Cancer Institute Small Business Technology Transfer funding and a National Science Foundation Innovation Corps (I-Corps™) grant. UCLA, through its Office of Intellectual Property and Industry Sponsored Research, has filed patents for the technology. 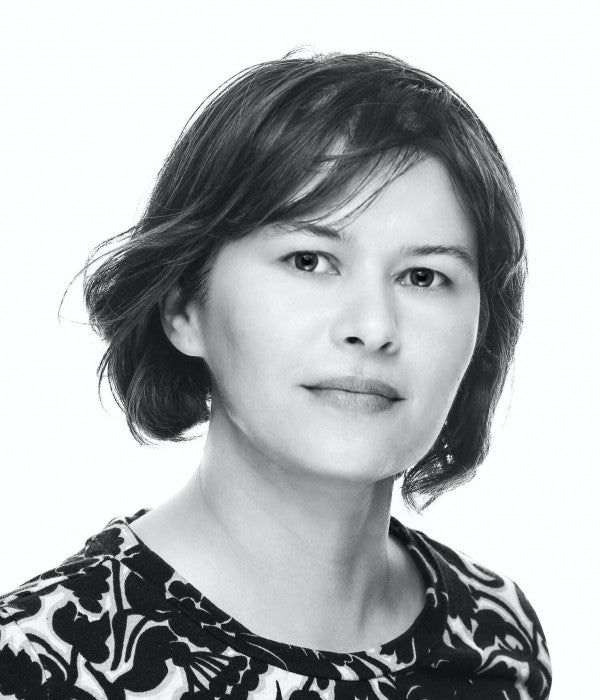 Jonak, a veteran information security officer in the U.S. Navy and computer science professional by training, embarked on her MBA with the express purpose of founding a startup. She chose Anderson in large part because of its Business Creation Option field study. “Every decade, I take a big step in my life and, in my 40s, it’s going to be a startup doing something completely transformational, something that’s going to make a difference and leave a very positive impact on the world.” Jonak, who also founded the nonprofit Spotless Mind to increase local composting and advocate for zero food waste in landfills, says the most memorable advice she ever got came from a mentor while she was on a soap box about what she thought was wrong with businesses’ missions and practices. “‘Bitch with a purpose,’ he told me. So, when I saw the opportunity that Anderson afforded, with the BCO program as a safe sandbox, the mentorship of professors and Anderson’s emphasis on social impact, it really inspired me to apply.”

She intercepted Liang’s abstract purely by chance, at a moment when he was about to decide against competing in the Easton challenge because he wasn’t sure about a path to collaboration across professional schools. “When you combine interdisciplinary fields,” says Jonak, “you can get some really phenomenal outputs.” Nur Labs’ product — a confluence of engineering, machine learning and medical science — arose from UCLA Samueli School of Engineering Professor Ya-Hong Xie’s lab. It introduces a novel liquid biopsy for early lung cancer screening. “It comprises a nanochip, a spectroscopy technique and machine learning,” explains Liang. “We look for cancer biomarkers that can be found in the blood.”

Jonak notes it’s a myth that lung cancer is prevalent only among smokers. In fact, the disease is the second most common cancer for men and for women, and not exclusive to tobacco users. The key is early detection: The Nur Labs product and technique yield high sensitivity because they focus on living cells, not dying cells like their current competition. And, says Jonak, the FDA barrier to entry is lower for diagnostics than for therapeutics, which means her nascent company could be operating — and intercepting illness — sooner than later.

The Nur Labs team is tapping campus-wide resources and involving itself in UCLA-sponsored pitch competitions and opportunities. Among its advisors are Anderson alumna and pulmonologist Dr. Chidinma Chima-Melton (’20) and Dr. Scott Oh, co-director of interventional pulmonology at Ronald Reagan UCLA Medical Center, whom Jonak asked to serve as clinical principal investigator overseeing the team’s Institutional Review Board (IRB) application. It’s a target milestone for Q4, she says. “We need to prove out the platform using live data. So, this requires real patient blood samples. Thanks to the vast and accessible resources on the UCLA campus — in-person as well as remote — we’re working with real scientists.”

“It’s democratizing our access to information that we can all participate equally.”

The team’s BCO is supervised by Jennifer McCaney, co-executive director of UCLA Biodesign, a joint interdisciplinary initiative led by UCLA Health, the David Geffen School of Medicine and Anderson that promotes leadership and entrepreneurship in health care technology. The Nur Labs team members are alumni of the UCLA Anderson Venture Accelerator’s three-month summer Activate program. They were semi-finalists in Anderson’s annual Knapp Venture Competition and they have been accepted to the UCLA Technology Development Group’s (TDG) Startup in a Box, among many other incubation and funding initiatives. Nur Labs is the first all-EMBA team to be accepted to the prestigious UCLA Biodesign program.

Executive MBA students are accustomed to collaborating from afar, but they rely on the on-campus component of their degree program to make progress with their teams. Thanks to Anderson’s quick pivot to remote learning in March 2020, EMBAs’ access to campus resources hasn’t been interrupted. Jonak describes 2020 as “a dumpster fire in many regards. But it’s also been a great equalizer when it comes to access to information,” she says. “Webinars led by [Easton Center faculty director] Professor Terry Kramer used to be available only in person. It’s democratizing our access to information that we can all participate equally.” The Nur Labs team is applying to accelerators across the U.S. and completed Startup Boost Los Angeles in early 2020. “I can be in Texas,” says San Antonio-based Jonak. “Deepa can be in Nevada and Brian can be in Florida, and we can all dial in.”

What’s next for Nur Labs? As the team marks its milestones in the UCLA Biodesign incubator and works with medical professionals to conduct feasibility studies, their hope is that the platform sets a standard for industry application. “We need to be part of your routine physical,” says Jonak, whose intention with Nur Labs is to “look at an old problem with a fresh pair of eyes.”