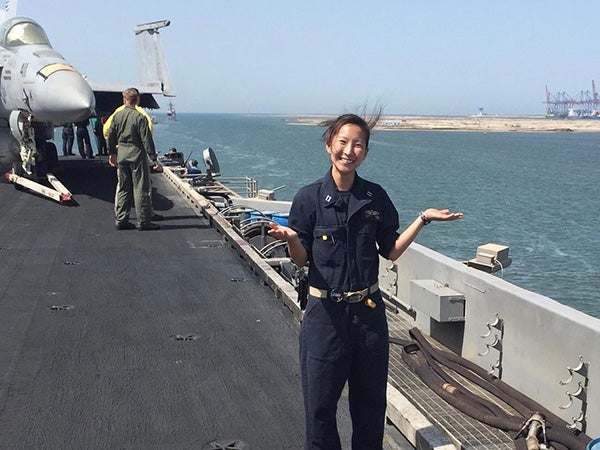 Alice Hong (FEMBA ’22) is a former U.S. Navy Surface Warfare Officer who transitioned into civilian employment in June 2018 as a consultant supporting U.S. Department of Defense acquisition programs for Booz Allen Hamilton. She grew up in Los Angeles but left California when she entered the Naval Academy in 2008. Since then, she has lived in three East Coast states and in Japan, and is now based in San Diego.

Startups Showcase a Diversity of Thought

Read the story
Q: What does a Surface Warfare Officer do, and what led you to that specialization?

A Surface Warfare Officer, or “SWO” (pronounced “swoah”), is often described as a “jack of all trades, master of none.” Our two main responsibilities during our first couple of years are to learn how to lead teams in driving a warship and how to lead our assigned division in accomplishing the administrative and operational tasks required to keep the ship properly manned, trained and deployable. I wanted to be a “SWO Nuke” because I wanted the chance to be part of a uniquely close-knit, hard-working team of nuclear trained sailors who, as “surface nukes,” happen to work on board aircraft carriers — much cooler than windowless subs.

One of the most memorable experiences I had in the Navy was participating in “live fire” exercises. We tested all weapons, including harpoon missiles, vertical launching system missiles, five-inch guns and the close-in weapons system on our ship, a guided missile destroyer. I orchestrated the preparation and firing of our Super Rapid Bloom Offboard Countermeasures Chaff and Decoy Launching System. It was a unique and significant responsibility for a fresh college graduate to have.

Q: When did you develop an interest in management consulting and decide to pursue an MBA?

As a Division Officer, I enjoyed being exposed to various project and personnel challenges. I’d met some incredibly genuine and inspiring people who shaped me into who I am today. I hoped to continue meeting new people and formalize the “soft skills” in management I’d learned in the Navy. So I wanted to pursue an MBA within a few years of getting out of the military.

I chose to commute from San Diego to UCLA through the FEMBA program because, simply put, I think it is worth it. So far, the faculty and staff have been so helpful and supportive. The culture here is very collaborative and I’m surrounded by motivated classmates who push me to work harder than I would if I was doing this by myself. I have also heard about extremely positive experiences from multiple Anderson alumni about the international exchange opportunities, which I am looking forward to.

I haven’t lived in California since I left for college and have spent many holidays away from home and family. So now that I go to school at UCLA Anderson, I have even more reason to visit home more frequently (and make up for lost time). Many people in my class live in San Diego, so I’m looking forward to get-togethers or study groups down here.

Q: Did you meet anyone in your FEMBA cohort on your first day that you instantly connected with?

I really like my learning team of five. We have completely different backgrounds (engineering, finance, technology, consulting) and, this might sound corny, but I felt like we all clicked right away. It’s cool to think that it’s only been a few months, but so far, we’ve successfully navigated through several weekday/weekend video teleconferences, writeups and case studies. I suppose our latest bonding moment was commiserating over our first midterm! I would love to keep in touch with my first learning team even after we branch off into new teams next quarter. Go, Learning Team 10!

Q: Did you experience any difficulty, as a military veteran, when seeking jobs as a civilian? Did you have to dispel stereotypes among potential employers?

So far, I have not had many difficulties as I sought jobs as a civilian but I suppose my job seeking journey is not over yet. I’m fortunate to work at a company that can use my military experience as an asset but also allows me the opportunity to develop other skills and knowledge in the civilian workforce.

Q: What kind of knowledge and skills did you bring to Booz Allen Hamilton when you transitioned? What does your current position entail?

My company supports many Department of Defense programs. As a veteran, I was familiar with acronyms and military rank structure, which helped me assimilate to my surroundings faster. I also understood the reasons behind some military processes and requirements, which helped me communicate them to a client who may not have been as familiar. The most important skills I’ve learned so far are communication and knowing that I may not have all the answers but I know who and how to ask.