L.A. Dodgers’ New Lead Physician Is a Pioneer for Women in Sports Medicine 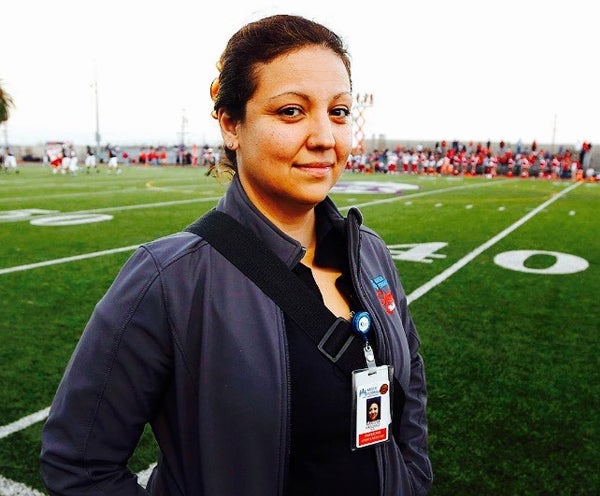 Marissa Vasquez (’18) is a health sciences associate clinical professor at UCLA David Geffen School of Medicine in UCLA Family Medicine and the Division of Sports Medicine. She is the primary care head team physician for the Los Angeles Dodgers and a founding board member of ElevateMeD, a multifaceted scholarship program for medical students that promotes diversity in medicine.

A Global Perspective on Social Impact

The Course for Diversity

Not long ago, Dr. Marissa Vasquez (’18) had reached the pinnacle of her profession. The Temple University Medical School graduate served as lead physician for the 2015 Special Olympics World Summer Games, held on the campus of UCLA, and was the division chief for sports medicine and fellowship program director at Kaiser Permanente.

But feeling that “something was missing in her educational trajectory,” Vasquez decided to enroll in UCLA Anderson’s Executive MBA program, and her decision to go back to school soon paid off. In March 2020, she started a new job as the primary care head team physician for the Los Angeles Dodgers, becoming one of the first women to hold the position in Major League Baseball and the first woman of color; she is the Dodgers’ first female lead physician. She wears many hats, and a Dodgers cap is only one of them.

Q: What was it like to be one of the anchor lead physicians at the Special Olympics in 2015?

It was very demanding, but also very satisfying. We had over 7,000 participants in the event, coming from more than 170 countries. We had to understand how to take care of athletes with intellectual disabilities while hosting a mass event for people who spoke many different languages. My role was to be the head physician or “medical captain” of the local medical clinic, to deploy individuals to different sites where the events were taking place, and to coordinate all of the events through our police and ambulance services, as necessary.

Q: Why did you decide to pursue an Executive MBA at UCLA Anderson in 2016?

One of the challenges that I was facing right after the Special Olympics was in my practice in sports medicine. I was the division chief of sports medicine at Kaiser Permanente, and I felt that my understanding of operations and financial bookkeeping activities, which were part of my role, was limited. I was learning on the fly a lot of the time. I wanted to formalize that education and have a really good understanding of what those different areas meant in my practice and in my job.

Shortly after the Special Olympics, I started looking at different programs for an MBA. I looked at some programs that were health care-specific, but I felt that the focus was too narrow. When I went to an open house at UCLA, I felt that this was the program that would take me in the direction I was interested in going. It had a diverse cohort of individuals in each class, and I felt that would give me a much broader perspective that could be applied to health care.

Q: What was it like to go back to school mid-career?

It was challenging. Managing time is something that you quickly have to learn to do. I was working full time and I have a young family. Thus, going to UCLA Anderson was like having a second full-time job. One of the things that made it work was the fact that classes at UCLA were every other weekend. That gave me some flexibility to be able to dedicate every other weekend to the MBA program. During the week I had to manage my time to make sure that I could meet up with my cohort or dedicate the time that I needed to complete assignments.

Q: How did enrolling at UCLA Anderson relate to working in the medical profession?

All of the professors at UCLA had a breadth of knowledge that could be applied to health care. That gave me great perspective on my work in the field. Working with other students in professions in different sectors related to health care also was incredibly helpful. For example, a couple of fellow students were in the pharmaceutical industry, and we had others who were in the medical devices field. Some of them came from the biomedical engineering side. I really didn’t have access to that knowledge in my everyday life at work, so that gave me a brand new perspective about aspects of health care that affect the frontline physician work that I do.

Another interesting angle was that there were fellow students with a background in medical laboratory testing. Little did I know that, when the pandemic hit, I would need to lean on these connections.

Q: What else did you learn at Anderson that you were able to apply to your job?

As the division chief for sports medicine at Kaiser Permanente, I was responsible for a $1 million budget that included physicians, non-physicians and medical supplies. I was doing everything by the way it had been done before. I was following past behaviors. At Anderson, I learned about different ways I could streamline operations and bring value — basically, by improving our efficiency in clinic. I found that we saved significantly; we ran a much more efficient clinic and there was a lot less waste of supplies and space.

I also used some of my skills from the MBA to start a nonprofit organization with a friend of mine from medical school. It’s called ElevateMeD. It helps create scholarship funds and programming for medical students of diverse backgrounds — particularly students of color. It also teaches financial wellness, leadership development, mentorship and personal improvement during the course of the scholarship year. We started it in 2018, six months after I graduated from UCLA Anderson, and we launched it in 2019. We had our first class of scholars during the pandemic, when we awarded $10,000 to 10 scholars in 2020.

Q: How did you end up leaving Kaiser Permanente for UCLA Health?

In the process of putting the nonprofit together, I started looking at other opportunities in sports medicine. I discovered that UCLA Health was looking for a sports-medicine physician with an MBA. The only caveat was, they wanted someone who had professional sports experience, which I did not have. I had experience with other elite sports and I had been head team physician at Occidental College [in Los Angeles] for 13 years. Nonetheless, UCLA Health ended up offering me the job.

I was a little bit nervous about accepting the job because I had been at Kaiser Permanente for so long. However, I felt that this was a great opportunity to build and grow in a different direction than previously. This position would allow me to use my medical skills as well as the business and leadership skills that I learned at UCLA Anderson. Little did I know that I would start my new job during the pandemic.

Q: What are your duties now?

In my current position at UCLA Health, I am the primary care head team physician for the Los Angeles Dodgers and a sports medicine consultant. I started on March 1, 2020. I flew to Camelback Ranch in Arizona, which is the spring training site for the Dodgers, to conduct our annual team physicals. At that time, things weren’t closed down. It was just physical distancing and the option of wearing a mask. And then the following week everything closed down. Everything was put on hold. Everybody left the training site and went to their respective homes around the country.

As the weeks went by, we were tasked with putting together a COVID-19 protocol. We had to come up with an operations manual for the club in the event we were able to have games. We had to deal with many different scenarios: how would cleaning happen, where would players be seated, how many people would be allowed in the training room, how to go about testing protocols? We had to look at all of those details and come up with a plan for home, road travel and visiting other stadiums. It was extraordinarily elaborate. That said, it was an oddly fun, busy and extremely exciting year. That the Dodgers became the World Series champions was an added plus.

Q: Did you accompany the Dodgers to the World Series games in Texas?

I’ve been stationed in Los Angeles the entire time. I was at the clinching of NL west title and post-season wildcard games, which were held at Dodger Stadium. That was the extent of the post-season that I was involved in. Once the Dodgers went to Texas, there were venue physicians that knew the local resources and were coordinating care there. I would get calls for specific questions sometimes. We were on call 24/7.

Q: What’s been the biggest challenge, besides the virus itself, during the pandemic?

I think the biggest challenge is education. We’re constantly learning new things because we just don’t have enough experience with COVID-19 over a significant length of time. It’s very easy to let your guard down and not follow the protocols as strictly as we should because we all get tired. It’s just human nature.

Q: What does this mean for the Dodgers and Major League Baseball moving forward?

Traditionally, when we screen for cardiac conditions for athletes, we screen for congenital conditions (that is, conditions that happen from birth) and conditions that happen spontaneously in athletes because of their training. One issue we’re seeing is that a large portion of people who get affected by COVID-19 may have some cardiac involvement, even if they have mild symptoms. So, I think that the cardiac screenings that we normally would do for the players may look completely different for next season.

I’m looking forward to experiencing a full season. I don’t know if that’s going to happen — I don’t think any of us knows that at this moment. I’m optimistic that we’ll get this under control and that we’ll be able to have a full season.