The alumna to receive the 2019 Outstanding Alumni Service Award

Kate Pletcher (’07) grew up with eight siblings and was always the most enterprising kid in her neighborhood, cornering the market in everything from lemonade stands to babysitting to clearing roof gutters in the Minnesota winters. She was filing income tax returns by the time she was 13.

“Entrepreneurial” described her then and it describes her now.

Eight years ago, Pletcher founded Treehouse Partners, a recruiting firm designed to “help clients view their organizations with a new perspective,” like looking into a neighbor’s yard from a treehouse and seeing all the lost balls you lose track of at ground level. Having placed her husband and Anderson classmate, Erik Pletcher (’07), into his previous job, she recruited him two years ago to partner with her on what is now the family business.

“At least once a month, an alumnus reaches out with a random thank you. Those contacts reenergize me.”

Pletcher says they always wanted to work together. They’ve known each other since middle school and interned in college together, then entered business school together. She says they kept expectations reasonable. “It works because our to-do lists, personally and professionally, are the same,” she says, noting that the “to-do list” includes two children, ages three and five.

Pletcher is a leader and a builder of communities, someone who brings people together and helps them succeed. Central to her origin story is the 22-year-old St. Patrick’s Day parade in Madison, Wisconsin, which she founded during her first year in college. On the basis of this accomplishment, she reevaluated her intended career as a pediatric cardiologist and shifted to embrace her natural abilities in sales and event planning.

Pletcher says she feels fortunate to be dialed in to the changes taking place at Anderson since she graduated more than a decade ago. “The fundamentals are in place, with students empowered to make the most of their two years,” she says. More and more students interested in entrepreneurship are graduating, she notes, whether they’re headed toward corporate jobs or starting their own businesses. “The need for an MBA has changed,” she adds. “Now the focus is on acquiring new skills that cannot be acquired in a job." 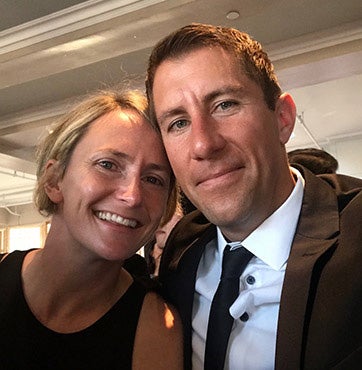 Pletcher is being honored with UCLA Anderson’s 2019 Outstanding Alumni Service Award, the highest accolade for exceptional service that the school bestows on its alumni. She has served as a class president since 2012, is an L.A. chapter and Alumni Board of Directors member, and is on the board of UCLA’s Bruin Professionals, serving as moderator for the Century City group. Pletcher also created UCLA Anderson’s CEO Forum, a peer-mentoring program for alumni founders and CEOs that now boasts five groups in three cities. She has even served as an adjunct professor at UCLA, teaching “Leadership through Communication” to undergraduate students.

“I’m humbled and honored by this award,” Pletcher says, adding that she isn't planning on slowing down in her alumni activities. “At least once a month, an alumnus reaches out with a random thank you and stories about how much I’ve influenced them. Those contacts reenergize me.”

“Kate epitomizes what this award recognizes,” says Jonathan Schreter (’00), president of the UCLA Anderson Alumni Network. “She has built the CEO Forum into five vibrant chapters in three cities that serve to bring enhanced value to our MBA degree. Kate may hail from Minnesota, but she bleeds UCLA blue and gold.”

Previous winners of the Outstanding Alumni Service Award are: