Twin brothers working in rapidly changing industries diverged professionally but count their similarities as an advantage
Share this article: 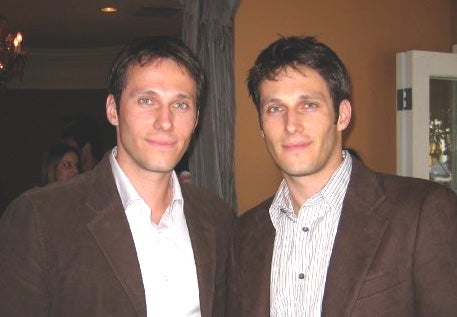 Jim (’04) and John Baudino (’04) are more than just twin brothers, they are best friends whose paths ran parallel for most of their lives.

Consider: Both earned undergraduate degrees in industrial operations & engineering at Michigan, then each took a job with Deloitte Consulting before signing on with the same startup. They decided that California was where they wanted to be, so they each only applied to one b-school (UCLA Anderson, naturally) and together they earned their MBAs.

Since then, though, they’ve forged separate careers matched to their individual skills, whose subtle differences are apparent to anyone who may have been watching all along.

To those who know them, John’s the “data guy” and Jim’s the “marketer.” Confronted with the comparison and maybe caught a bit off guard, John laughs. “Today, I am the data guy,” he says, perhaps suggesting it wasn’t always the case. But he adds, “We worked at the startup together and that really showed where our paths diverged,” John says. John says he “dove in and built all the technology infrastructure.” Jim also coded extensively, but his attention was more on the marketing side. “It was a case of ‘here’s what we need to get done’ and where we really focused,” John says.

“Why I find it so fascinating now is, more and more people have to fully understand how to analyze this new type of data for digital use.”

Today, the twins find themselves in very different businesses. John is global vice president at Acxiom, where he and his team help digital publishers and platforms like Twitter, Roku and Adobe use data to better support advertisers, such as Toyota and Sony. Jim is VP of corporate development for cannabis news platform Merry Jane Media. According to Jim, the company, founded by hip-hop mogul Snoop Dogg and partner Ted Chung, is a traditional online publisher with an associated marketing agency called Gram by Gram.

“Just based on the needs of the industry, a lot of brands weren’t ready to go out into the marketplace and advertise and do marketing,” Jim says. “From a publishing perspective, their needs were more about brand strategy.” Gram by Gram helps such firms go from the medical marijuana market to the recreational market and, eventually, to a general audience.

Jim has performed a number of roles in the three and a half years he’s been with the company. “I’ve gone from corporate relations and working on a lot of the public relations aspects to identifying corporate development opportunities,” he says.

As the brothers prepare to celebrate their 15-year reunions, they find themselves in very different businesses with very different challenges. But there remain similarities, as both find themselves in nascent arenas that didn’t really exist when they graduated from Anderson. Sure, data analytics and marijuana were around in 2004, but changes in laws and technologies have led to functions and industries that didn’t exist 15 years ago.

“I love the space I’m in now because it has evolved to where it is extremely valuable,” John says. “I’ve been with Acxiom nine years, working with data before that in startups and new capabilities. Why I find it so fascinating now is, more and more people have to fully understand how to analyze this new type of data for digital use. How do you think like that? You have to know the problem you’re solving, and then know how to actually go and get the data to support it. Those people are extremely valuable in today’s market.”

Jim says the marijuana industry is constantly changing, and he compares it to the Wild West in many respects.

“I think over the last three years we’ve seen a significant improvement, not only in education and awareness, but also in products, quality and the overall visibility of cannabis as a plant,” he says. “Now you’re getting so many large players coming in the market. Once [Corona beer parent company] Constellation Brands invested $4 billion into Canopy Growth Corporation, it set a precedent for major companies coming into the space, and I think that helps build acceptance.”

Despite their similarities, one can’t help but wonder if their MBA experience and careers would have been different if the Baudinos had attended different MBA programs.

“The good thing is, we had done it before in undergrad, so we knew what to expect. We always had friends who would tell us we couldn’t do anything apart, that we weren’t our own persons,” John says. “In grad school, we knew that together we meet people more easily, and it’s fun. He’s like my best friend.

“But we each went abroad for a semester and we got to be individuals. We’ve always said that if we wanted to, we could go off on our own somewhere else, but the benefits of being together outweigh any negatives.”