Russell Benaroya Pushes His Limits, in Business and on the Trail

Sarah Valdovinos (’01) sometimes describes herself as a “recovering banker.” For 12 years after graduation from UCLA Anderson, she was with Goldman Sachs and then Barclays in commodities markets. But as a student, she was active in Anderson’s Entrepreneur Association and says she was always keen to branch out on her own ventures.

In 2013, she co-founded New York-based Walden Green Energy, which develops utility-scale renewable energy projects. As a seasoned investment professional, she also makes discretionary growth investments in clean energy companies and ventures in the U.S. and abroad.

“Climate science shows that we have a problem. I’m not preoccupied with winning the debate about who’s causing it. The question is, what are we going to do about it?”

In addition to capitalizing on what she describes as an incredible investment opportunity, she was drawn to the renewable and clean energy space because she “wanted to do more to further the conversation about sustainability than reusing my coffee cup sleeve,” she says. “Walden was a way for me to apply my skill set and career on Wall Street to tangibly contribute to a more resilient society.”

Valdovinos believes the general concept of renewables is well on its way to becoming mainstream for most institutional investors, and it’s already in the zeitgeist of millennials and Gen Z. “More than $300 billion was invested in clean energy in 2018 according to BloombergNEF,” she says, referring to Bloomberg New Energy Finance, a research organization focused on clean energy and other sectors. “At Walden we’re in the infrastructure space, that’s how we think about it.”

But she says the U.S. workforce needs rapid and continuous development to keep pace with trends in green infrastructure growth. That’s where education comes in, and Valdovinos’ current passion is her work with UC San Diego’s CREATE STEM Success Initiative (CSSI) for K–20 science, technology, engineering and math education.

“Thanks to the leadership of the CREATE-housed San Diego Science Project we have partnered with the Scripps Institution of Oceanography to launch a program that delivers climate science lessons with hands-on activities to underserved middle school children,” she says. “Beyond building out the pipeline of future innovators and contributors to clean energy, sustainability and resiliency, we’re also addressing an issue of educational equity, which is very near and dear to my heart.” 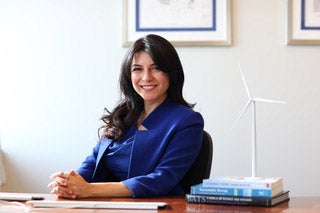 The resulting lessons will be taught this year to more than 700 children and will also be used by the teachers in coming school years. Valdovinos is now fundraising to expand the program to more schools.

“Adding a tech component to educational and workforce opportunities is crucial,” she says. “In the future I’d like to use AR/VR to give kids exposure to geographic regions of the world where the impacts of climate change are most visible, and also to places like wind farms, so they can see science in action.” She says her latest idea is to capture video of Hearts in the Ice, the first over-wintering expedition to the North Pole by a women-only team, and use it in the classroom. She hopes to find a tech partner before the team embarks this September.

Valdovinos grew up in Los Angeles, and says she came from a family averse to waste. “I remember learning early on in school about recycling, but we already regularly recycled at home, partially out of need,” she says. “We sold our aluminum cans to recycling centers, and we repurposed and upcycled things all the time. When we visited family in Mexico, we always took our own bags to the store and returned empty glass bottles. Everyone did, it seemed normal.”

Valdovinos was the U.S. Clean Energy Education and Empowerment (C3E) Initiative’s 2017 law and finance category winner, recognized for outstanding leadership and accomplishments in the clean energy sector. She serves on the board of a distributed solar company in Mexico and intends to keep an international reach while seizing opportunities within the U.S. market as well. 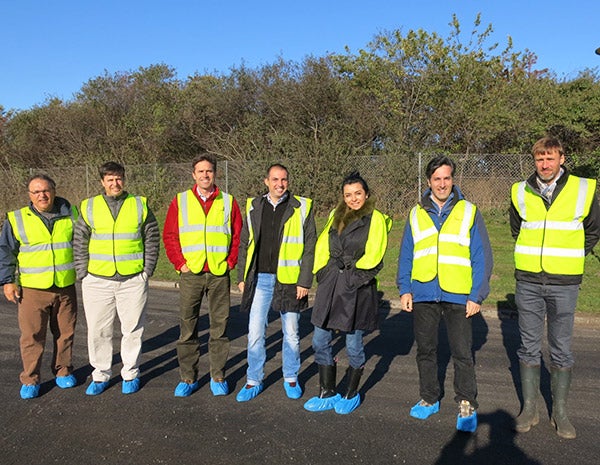 Touring a Composting facility in Denmark

“Climate science shows that we have a problem we can no longer ignore,” she says. “More frequent and violent hurricanes and fires alone are causing loss of lives, plus billions in damages, and costing taxpayers hundreds of millions of dollars. I’m not preoccupied with winning the debate about who’s causing it. The question is, what are we going to do about it?”