An Inclusive Leader, Korn Ferry Senior Advisor Has Had a Career of Firsts 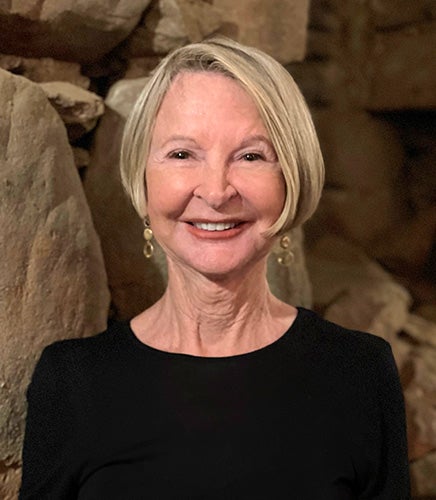 Caroline Nahas (B.A. ’70) is a senior advisor to Korn Ferry. She has served as vice chairman managing partner of the Los Angeles headquarters office and North America leader of the consumer practice. Her primary focus is consulting and advising boards on governance, succession, effectiveness and recruiting. Her clients range from private to mid-cap to the Fortune 100 in a wide range of industries. Active in many civic groups, Nahas is chair of UCLA Anderson’s Board of Advisors and served as the corporate board chair for the United Way of Greater Los Angeles.

In a career filled with firsts, longtime UCLA Anderson Board of Advisors member Caroline Nahas (B.A. ’70) has adhered to a couple of mantras: Stretch outside your comfort zone, and maintain a balance of optimism and honesty, particularly during difficult times.

Nahas grew up in the San Fernando Valley, attended public schools and then earned a bachelor’s degree from UCLA. During her college years, a part-time job at Bank of America set her on an unexpected career path that led to her joining Korn Ferry, where she later became the first female partner at the Los Angeles–based executive search behemoth. It’s hard to imagine now that a male colleague once told her that a woman would never achieve partner status at the company. After serving as managing partner and vice-chair of the firm’s L.A. office for 25 years, she is now senior advisor to the firm’s Board and CEO practice. Nahas has seen the company evolve from an executive search firm to a full-fledged global professional services firm specializing in all aspects of driving performance through a company’s talent.

Nahas and her husband, Richard, established a fellowship to benefit UCLA Anderson and undergraduate students. She was the first woman to deliver an Anderson commencement address, the first female chair of United Way (which she led during the 2009 financial crisis) and the first female board member of Dine Brands Global, the publicly traded parent company of the Applebee’s and IHOP restaurant chains. The board now has four women members.

Through her pioneering career, Nahas achieved many milestones, including her role as the first woman to serve as chair of UCLA Anderson’s Board of Advisors, something she has done for more than a year now. While she is proud to have been a role model for countless female executives and colleagues, given that it’s 2022, she is quick to put the spotlight on the achievements of many women everywhere.

Q: We’re going to get into your career in a bit, but let’s start with something more philosophical. How would you describe your leadership style?

I strive to be an inclusive, fair leader who leads by example.

Respect for everyone, regardless of level or status, is very important to me, as is engaging others and getting different points of view. Ultimately, I can make decisions, but listening to people, valuing their opinions, truly lets them know they are heard. I’m then able to integrate many different points of view and come to a conclusion, and the people I work with understand why I’ve come to that conclusion.

Q: What do you think those you’ve led would add to that?

They, hopefully, would add that I see my accomplishments through others and that I expect a shared responsibility between the company and the individual. The company should provide an environment of inclusion, respect and opportunities for continuous development. The employee should be present, engaged and contribute to the enterprise.

Q: Los Angeles, as a region and — forgive me — a concept, plays a large role in the UCLA Anderson ecosystem. For one thing, it’s where the majority of our alumni live, and the location is a huge draw for students who choose Anderson. You grew up and attended college here. What does the city represent to you?

Los Angeles, to me, has always felt like the largest-yet-small community.

I had the benefit of being in a profession in which I was able to meet hundreds of people at the highest level. That really afforded me an entrée to feeling so much a part of the community. I was fortunate that Korn Ferry was committed to community service. It fulfilled my desire to give back and also was beneficial from a business standpoint. Even though I’ve had the opportunity to travel a great deal personally and professionally, I still feel Los Angeles is one of the most vibrant and exciting places to be.

I’ve always been able to relate to a wide range of people. As a recruiter, I have a few common denominators that I look for: Obviously, you look for individuals who are achievers, but not in the absence of values and integrity. The rich diversity of Los Angeles — the economic diversity, the ethnic diversity, the diversity of businesses that range from Fortune 500 companies to startups — fueled me.

Now, I will also share that I have an affection for Los Angles because I went to UCLA. I have great pride in being a UCLA alumna; UCLA provided the foundation for me to optimize my potential. The vibrancy of the universities in the region — and also the energy generated by a city of entrepreneurs — it all weaves into a very exciting, vibrant place.

Q: When did you join the UCLA Anderson Board of Advisors?

When Lester Korn [a co-founder of Korn Ferry] was appointed to be Ambassador to the United Nations Economic and Social Council in 1987, he had to resign from the Anderson board. Clay La Force [Anderson dean at the time] had wanted me on the board. I soon became chair of the nominating committee and did other things for Anderson. I was asked to consider being the chair earlier, but I had too much on my plate at Korn Ferry. With a new dean and my changed role with Korn Ferry, it was a perfect time to serve Anderson in this role.

Q: What’s it like leading a roomful of fellow leaders?

I learned a tremendous amount serving as managing partner of one of Korn Ferry’s largest offices. You are first among equals, leading talented, high-octane, high-performing individuals.

Board members have their own independent way of thinking. So, it’s a lot of developing one-on-one relationships with the individual board members, who have their own views and opinions. Creating an atmosphere of trust is key.

When I first became chair, I knew many of the people because I had been on the board for a long time, and I soon got to know the many new members. Even so, the first thing I did was reach out to everyone to ask them what they were thinking: What did they think were the best parts of the board and the school, and what things did they think we could improve? As I was communicating with them at board meetings, I would highlight some of the things I learned. I actually reported back and said, “Here’s what I heard. Here are some things that Tony and I are doing together to integrate your input.” They are outstanding leaders. I appreciate their engagement and input. We are all committed to the same goal: to bring Anderson to even greater levels of excellence. I am so looking forward to the Wooden Leadership Awards event and our May board meeting, both of which will finally be in person!

Q: How did you get into recruiting?

While at UCLA, I was working part time at Bank of America as a teller. My manager took an interest in me. She saw I had a strong work ethic and was customer service–oriented. Back to my comment earlier about relating to all kinds of individuals, I learned customers’ names and they would actually stand in line to wait for me. When I was about to graduate, my manager said, “I would like to recommend you for Bank of America’s management training program.”

At that time, women went into teaching or nursing, but not business. I went downtown to interview for the program. Halfway through, the head of recruitment said he had something else in mind for me. After quite a few interviews (I was quite young and men with years of experience had previously held the role), I was hired as a college recruiter. I could not have asked for a better first job. This was the time of the woman. After three years, my boss was promoted. They had no one to fill the role. I seized this opportunity to perform and distinguish myself and was named head of management recruitment for Southern California six months later. After two years, I realized that, although recruiting was great, it was not the mainstream of banking. I asked to be transferred to corporate lending, moving way out of my comfort zone.

A lot of the guys I had recruited were in that division. They were great mentors and helped me learn. It speaks to taking risks, going out of your comfort zone, continuous learning and building relationships. I did two or three years in finance at the bank. The first year was very hard, with a steep learning curve.

Q: How did you land at Korn Ferry? And what was it like for women at that time?

I did well enough in corporate lending, enjoyed it, and learned a lot about business, companies and leaders. But I thrived on people interaction. I joined Korn Ferry in 1977. I remember how sometimes in meetings with clients, eyebrows were raised, and I decided [that] I am going to win them over with outstanding work, confidence and building relationships of trust.

The word got out at Korn Ferry. More and more partners wanted to work with me. The work came naturally to me; it became a calling. One day — I’d been there maybe three months and I was thriving — one of the partners walked into my office. He said, “I don’t know what you’re doing here because there will never be a female partner at Korn Ferry.” But I said to myself, “It’s his problem, not mine,” I was encouraged and bolstered by a lot of people within Korn Ferry who saw my potential and believed in me, a foundation for my knowing how important it is to invest in people.

I became a partner in the mid-1980s. And now, more than 60% of the firm is female. We have women on the firm’s executive committee and many others in leadership positions.

Q: How does philanthropy figure in your life?

I was raised in a family where I was taught to give — and I was personally touched by generosity and kindness through an impactful experience at UCLA. When I was in college, my dad had a financial setback. I was in a sorority and was going to become president. I was working 25 hours a week but knew I had to add more hours to stay at school.

Due to the circumstances, I told the sorority’s alumni group that I would be unable to serve as president, which, at the time, was a heartbreaking conversation. A week later, the head of the alumni group called and said, “We want you to be president, and we have someone who wants to sponsor you through your last two years of school.” That person paid for my room and board. To this day, I do not know who that person — or persons — was. All I know is that someone incredibly generous and kind believed I had potential. That experience left a lasting impression on me. I still get emotional when I think of it. I made a vow to myself that I would do the same for others, which has culminated in our gift to UCLA and Anderson and the privilege of serving as the Board of Advisors chair. We all have many opportunities to help others in ways large and small, and they all matter!