An Investment Career Requires a Listener

Students Can Invest in UCLA Anderson

Bob Foster (’65) graduated from Oregon State University in 1962, then joined the U.S. Coast Guard. “I had fraternity brothers who went to Vietnam and didn’t come back,” he says.

Armed with an engineering degree, he decided to pursue an MBA. Foster walked into the admissions office in UCLA’s old Graduate School of Management building, filled out a form and handed over his transcript. “My GPA was 2.7,” he recalls. Two weeks later, he got the news: He was admitted to business school, but because he had no business experience he had to take a couple of summer courses in accounting and finance. No GMAT, no essay, no deposit, no problem. Foster enrolled at UCLA, beginning a relationship that lasted until his retirement in 2020.

His private-sector career achievements are too numerous to recount. His first job out of b-school was as a personnel manager for TRW Systems. (Why? “I don’t know what I’m going to do in life, but I’m pretty sure I’m going to work in business. I will need to know how to recruit people, how to compensate them, how to give them performance reviews.”) As vice president of sales for a timesharing division of Xerox, he exceeded every sales quota and ended up managing 17 branch offices and 100 salesmen. He was recruited as CEO of a South Bay manufacturing company, got into robotics and ran the company that robotically painted the M1A1 main U.S. battle tank in camouflage and the B2 Stealth Bomber. He dabbled in software, then became CEO of Thomas Bros. Maps — and oversaw the conversion from printed map books to CD-ROMs.

After a storybook 20-year run in the private sector, Foster was approached to become an advisor in UCLA Anderson’s nascent Global Access Program (GAP) field study for Fully Employed MBA students. GAP pairs international companies with student consultants who create for them an investment-quality, new-market entry plan, with full financial projections. Foster didn’t start the program (he credits legendary UCLA administrator Elwin “Sven” Swenson, who was the “father” of GAP, and Adjunct Full Professor Janis Forman, who was the first GAP faculty advisor and has served with an advisory distinction every year since) but he was heading it shortly after it launched. Together with Svenson, Foster built GAP, traveling the globe to recruit international companies interested in leveraging the expertise of Anderson FEMBA students as they sought to bring their products to the U.S. market. The majority of participating companies have come from New Zealand and Finland — the latter so grateful to the GAP program that both Foster and Svenson were named Knight, First Class, of the Order of the White Rose, in recognition of their efforts with and on behalf of a wide array of Finnish companies.

Now retiring from academe, Foster reflected on GAP and his career at UCLA Anderson:

The first person in the GAP leadership was Janis Forman. I came the second year, and by year four or five I was a GAP advisor. Then the head of GAP left and went to the University of Florida, so then I got promoted. I did four or five years as an advisor, and then I was recruited by Sven, who really pushed for me to take it over. At that time, there were 12 or 15 companies, and that’s how I got started.

The question I get a lot is, why Finland and why New Zealand? The answer is, both of those countries are small, they both have a population of about 5 million and they only have one government. You go to Australia, you’ve got six governments. You go to other countries, they’re not organized in one government because they have states. Brazil, for instance: there’s eight different states. I’ve been to Finland every year for 17 years, and the government helps introduce me to companies. I think we’ve done over 200 GAP projects from Finland. 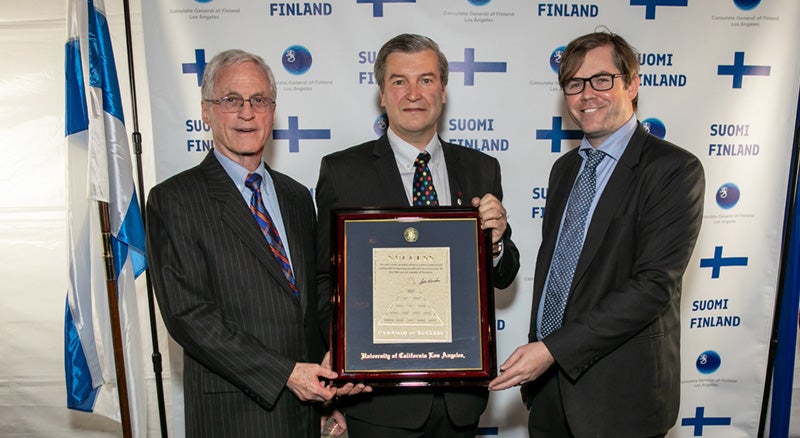 Professor Bob Foster and Assistant Dean Fredrik Leuhusen present Finnish Consul General Stefan Lindström (center) with a plaque bearing Coach John Wooden’s Pyramid of Success. Finland has had 236 companies participate in GAP since the start of the relationship in 1999 (year 2 of GAP’s founding in 1998).

If you’re a participating company, you’ll get a complete business plan. We will give you three different financial projections. You’ll have a summary of the results of the competitive analysis, and the students will make a formal presentation in front of you and will be judged by three outside professional judges, each of them with experience in your product or your market, and you’ll do all of that for $15,000. You’ll have a couple of students come and spend time with you to really touch and feel your products, meet with your investors, meet with your senior management.

It started off focused primarily on tech, but in the past we’ve had all sorts of companies. We’ve had food companies, we’ve had fashion; we had a jeweler from New Zealand.

We have a spreadsheet that shows over a billion dollars of investment that have been made in our companies. I think we’ve served almost 800 companies through GAP.

Not every company that wants to participate in GAP meets our criteria. First of all, rarely do we engage with a company that has less than 15 to 20 employees, because we can’t take a chance they’ll go out of business in the middle of the program. The second thing is that they must have proven in their home market that they have a viable value proposition. If it’s a farm implement that they haven’t sold to their own farmers in their community, we likely won’t work with them.

I think our teachers have the students’ interests at heart. We do a great job of hiring new Ph.D.s to join the Anderson faculty, and I think that, with people like me and (Easton Technology Management Center faculty director) Terry Kramer and (entrepreneurship lecturer) George Abe, there’s a group of us that have come in as practitioners and made a real difference as well.

I just think that those of us who are in that category bring a unique set of skills, all of us in our own way. That’s something you will not get at other schools. I take a lot of pride in it. I think we add a lot of real-life experience to the student body that we work with.

What did my Anderson experience mean to me? Other than getting a good solid education in business basics, I enjoyed a fellowship I won to study in Europe for eight weeks. Between my first and second years there was a contest, and I won it. Anderson gave me — and gives our students who grew up and went to college and studied many different things — the opportunity to gain skills that are applicable almost in any business. More important, you get to reset your employment history at a much higher level.

But more than that, I value the ability I’ve had to make an impact on students, a real impact. I can’t tell you the number of times I get feedback from a former student that lets me know I’m doing something right. I’ve been accepted by the ladder faculty. I’m one of the first people at Anderson to make it to full professor who doesn’t have a Ph.D. I’ve received a number of teaching awards.

But the thing that kept me here is, it was a mission to me. I didn’t do it for the money or for my ego. I think we’re giving students an experience that they will have for the rest of their lives.