Rhian Rogan’s (’20) decision to enroll at UCLA Anderson and earn an MBA was a practical one. While working as an analyst at Killer Tracks (a subsidiary of Universal Music Publishing Group focused on licensing music), she continually explored opportunities in different verticals and functions of the entertainment industry. Despite her industry experience, she says she kept getting beaten out by “investment bankers with an MBA.” With a desire to remain in Los Angeles and forge a career in entertainment, the one-time Riordan Fellow enrolled at Anderson.

The demands of Anderson’s full-time MBA program are enough to keep anyone busy. Rogan, though, upped the time-management ante, as she simultaneously serves in the California Army National Guard. Her military saga began with a chance meeting with a U.S. Army recruiter during her undergraduate days at the University of Pittsburgh. Almost two years later, the recruiter called.

“I applied to the MBA program thinking I wanted to pivot in entertainment to more of a strategy role and join a film or production company. I got to Anderson and I thought I wanted to be a consultant. Now I’m applying to Ph.D. programs.”

“It’s not something I ever expected for myself, but at the time, I wasn’t ready to go back to graduate school yet,” Rogan says. She describes the recruiter’s pitch: “You have a degree, you can commission to be an officer, you can travel, make some money, get good benefits.” Rogan was sold.

She says joining the Guard checked three crucial boxes for her. “I grew up playing team sports, and enlisting was an opportunity to be part of the team again,” she says. “That was really big for me. Two, it was an opportunity to learn again. I was a couple years removed from school, a couple years removed from formal learning experiences, and I do enjoy the learning process. Probably the biggest of the three things that led me to join was learning how to lead.”

Rogan did basic training in South Carolina (one of four Army basic training facilities), then joined her unit in California. She is a second lieutenant and is in the process of getting promoted. Rogan is a platoon leader for a signal company that manages communications. Traditionally, the commitment is one weekend per month and two weeks in the summer. “It’s a very loosely defined weekend. And the “two weeks” can run two weeks, three weeks or four weeks. In 2020, “summer” will be in the September–October range. “So, it varies,” she says.

In practice, Rogan tries to blend what she’s learned from the military with her MBA work. “The Army provides a pretty structured framework for accomplishing things. While adhering to that framework, I do try to bring in things I’ve learned from my MBA program, in terms of motivating people and understanding how people interact and how people respond to different situations,” she says. “One thing I tried to bring from my military experience to my MBA experience is something we call an after action review. Whenever we do a mission exercise or a training, we look back at it and see what was supposed to happen, what happened, what we can do better, what we did well, how are we going to approach it next time?” Rogan acknowledges that the after action review is less formal in her campus work, but says that providing a forum for colleagues to voice their opinions as a means to make processes better is important. 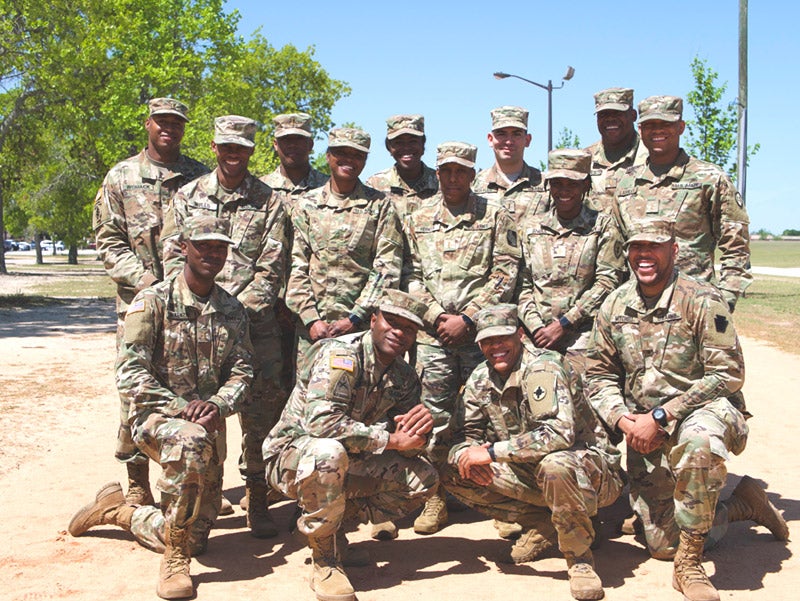 One aspect of Rogan’s professional life that’s been put on hold a bit while she does double duty as an officer and a student is her podcast. That’s right: podcast. Dubbed Rhian’s Hope, it features guests ranging from athletes to activists and focuses on those “using their platform to inspire hope in others.” Rogan became a fan of the format while adjusting to commuting in Los Angeles. A friend from the Riordan Programs bought her a book to get her started, and in September 2017 the first episode went live with Rogan serving as producer, scheduler, researcher and booker — everything but logo designer.

“I was doing episodes throughout, consistently from September 2017 through February 2019, then school caught up with me. In the meantime, I’ve been thinking about how I want to do it differently. I have some ideas for 2020 and we’ll see how that goes.”

Asked for a podcast recommendation, Rogan tips Planet Money, an NPR show that explains the economy. “It fits with my goal of being a professor. I love Planet Money,” she says.

And, yes, you read that right. “My plans have changed completely in an unexpected way,” Rogan says. “I applied to the MBA program thinking I wanted to pivot in entertainment to more of a strategy role and join a film or production company. I got to Anderson and I thought I wanted to be a consultant. Now I’m applying to Ph.D. programs.” Rogan intends to focus on management or organizational behavior.

“It’s been a journey,” she says. “Becoming a professor is very different than what I expected for myself.”