An accurate headcount in 2020 will be critical for California’s fiscal future, and she intends to tally each and every one of the state’s inhabitants 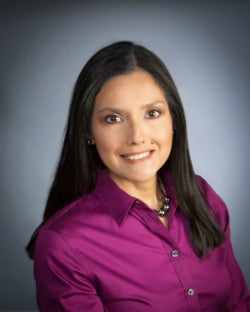 And when it comes to the 2020 United States census, it’s her responsibility to make sure every Californian is counted.

In August, Governor Jerry Brown appointed Martinez deputy director of outreach for the state’s California Complete Count effort. The organization’s goal is the development of a strategy for a complete and accurate count of California’s population and the creation of a campaign to reach some of the state’s most difficult-to-reach communities, including residents of rural communities, people with disabilities, the elderly, the homeless and immigrants.

Previously, Martinez spent more than six years with AT&T, where she served as director of public affairs and, later, director of external affairs for California; she also ran an eponymous public affairs consulting group. “I’ve always been really interested in managing and leadership,” Martinez says. “Going back to why I earned an MBA, I really wanted to lead an organization. Sixteen years later, that’s what I was focused on: managing teams, managing budgets, being a convener among various sectors.”

Martinez has been involved in census work before, serving as director of communications for the 2000 Census Undercount Campaign during Governor Gray Davis’ time in Sacramento, even before she earned her MBA. When the opportunity arose to contribute again, she was eager to apply her business skills to an important civic effort on behalf of California. “What appealed to me most,” Martinez says, “was empowering people.”

For states and communities, the main, once-a-decade census is hugely important. Census numbers are the basis for each state’s representation in the U.S. House of Representatives and for the fair distribution of hundreds of billions of dollars in public funding for everything from law enforcement to education, from health care to highways. As such, accurate counts are essential.

“The campaign is aimed at HTC (hard-to-count) communities,” says Martinez. “That includes kids 0–4 years of age, homeless individuals, ethnic minorities, people who live in rural areas and other population segments that are hard to count. The campaign involves a lot of outreach within a strategic and well-organized infrastructure involving numerous partners across California. My job is to oversee all of that.”

Martinez says the governor’s office has allocated more than $90 million for the campaign, up from $25 million in 2000, reflecting California’s population growth and other challenges. The key factor, she says, is knowing how to work with various constituencies, understanding the interests of everyone at the table and making sure all players come together with a focused goal: reaching every single inhabitant in California, and counting each person once and where they are.

Martinez’ role goes beyond the outreach. She is also tasked with managing contracts related to the $90.3 million the governor has earmarked for the effort, which will funnel funds to various community-based organizations around the state, each with a role to play. For Martinez and her team, this means developing and managing requests for proposals and evaluating which are most likely to reach the state’s various populations. The decisions are all based on demographics, other data and Geographic Information Systems mapping. “All of our dollar allocations will be based on that data,” Martinez says.

With the planning process underway, Martinez says the 2020 effort will be in much better shape in terms of lead time — roughly a year and a half this time as opposed to just a few months in previous efforts. By June 2019, the committee will have identified and selected which groups will help with the outreach and an outreach plan will be in place. Then census teams will “educate, educate, educate” the population so that people understand the census is coming and why they should participate.

California residents will receive their census forms in early 2020. Between spring and fall, a number of events will be aimed at getting maximum participation. By end of summer, Martinez says, there will be a concerted effort — block by block, phone call by phone call — to reach those who haven’t yet filled out their census forms.

“California has always been the state that’s hardest to count,” Martinez says. “The committee’s job is to proactively explain why the census is important and how necessary it is to fill out the forms.”