“Ask me anything!” was the call to action as UCLA Anderson celebrated allies of our LGBTQ+ community

Nearly Every Aspect of My Life Is Different for the Better

If You Want to Be Happy for the Rest of Your Life, Optimize It with Scientific Design

UCLA Anderson celebrates annually with a week's worth of activities that include student panels, social gatherings, guest speakers and a school-wide signing of the Ally Pledge. Traditionally held in April, Anderson's Awareness Week coincided this year with the greater campus' celebrations to promote more widespread collaboration and inclusion. 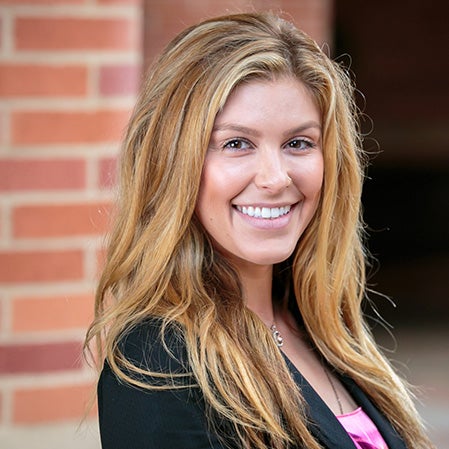 Adi Rajapuram ('19) and Justine Ramirez (B.A. '11, '20) were two of the student organizers of Anderson's 2019 LGBTQ+ Awareness Week. In their respective roles as VP and director of education and ally relations in the student club Out@Anderson, Rajapuram and Ramirez focus on engaging the UCLA Anderson community in all its diversity  — whether gay or straight, American or international, Asian or Latino, small town or big city.

This year, they said, they wanted to concentrate during Awareness Week on how the campus as a whole achieves inclusivity. And they wanted especially to broaden the base of allies: people who don't identify as LGBTQ+ but support those who do by declaring their allegiance, living without prejudice and committing to inclusivity.

“Roughly 35 percent of Out@Anderson club members are allies,” says Rajapuram. “But we’re here to involve everyone, not just preach to the choir.” 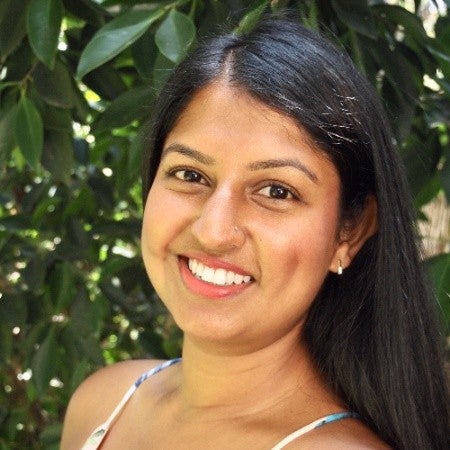 Rajapuram is from Berkeley, California, but wanted as an undergraduate to experience living in a different environment. She spent her undergraduate years in Texas, at a university that officially banned LGBTQ+ identity clubs and organizations. She says she chose UCLA Anderson for graduate school because of its broader perspective. A culture welcoming to LGBTQ+ students was important when she imagined her MBA experience.

"Inclusive culture was always very important to me," she says. "I knew that I needed to be in a place that would embrace me and allow me to explore every part of me, queer and otherwise. I felt that Anderson would be the right place to do that." Rajapuram says she first considered Anderson at a ROMBA (Reaching Out MBA) conference in Dallas. (ROMBA is an annual conference of LGBTQ graduate business students.) There she met Chris Weber ('09), a career advising and outreach director with Anderson's Parker Career Management Center, and other "out" students from Anderson. "The connection that I felt with all these people who were so open was amazing."

Anderson's Southern California location mattered to Rajapuram. "In L.A., same-sex dating is a lot easier. It's definitely a huge perk," she says with a laugh. "It's not just the queer community, which I found to be much more expansive here. But also the open-mindedness of the population. I feel like I can be more of myself, that I can make connections with other people. The fact that L.A. is diverse from [the standpoint of] multiple factors makes me feel more comfortable sharing who I am with others."

Ramirez earned a B.A. in communications at UCLA and an M.Ed. in urban education and leadership at Loyola Marymount University. Her passion for data analytics inspired her to apply to business school after teaching high school English in the Bay Area for several years. She chose Anderson because, she says, "I always felt like a part of the UCLA community."

In addition to a Valentine's Day-themed Anderson Afternoons happy hour and a "drag brunch," Rajapuram and Ramirez were excited to reprise last year's most popular event, a panel in which audience members submitted any question they wanted to ask Out@Anderson representatives.

Not far back in our history, "Don't ask, don't tell" was an officially mandated policy of the U.S. military. During Anderson's LGBTQ+ Awareness Week, the sentiment was just the opposite, as "Ask me anything!" was this year's call to action. People who may have once feared or reviled LGBTQ+ people, or for whom "non-binary" gender identities are a mystery, were invited to come out, as it were, to confront their fears or curiosity or hopes by posing questions to people on the front lines of dispelling myths and misconceptions. 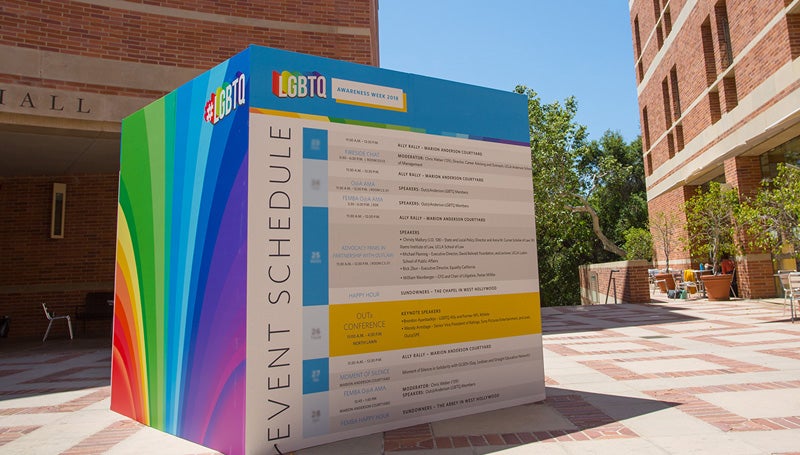 "We're expanding the conversation," she says. "It's like a get out of jail free card!"

As UCLA Anderson works on the forefront of producing the campus' most well-attended LGBTQ+ awareness events, Ramirez and Rajapuram give Anderson high marks for its efforts to cultivate and celebrate a diverse community. They also have suggestions regarding how the school might do more to walk the walk when it comes to true diversity.

"Do more to promote Anderson's diversity and inclusion initiatives to prospective students via social media channels," says Ramirez. She and Rajapuram agree that emphasizing the welcoming culture at Anderson will attract more applications. "Let prospective students know about all the great things that are happening here to create this inclusive environment."

Rajapuram adds, "Anderson can really look toward 'intersectionality' as the theme as we move forward. Right now our diversity efforts can be siloed at times, promoting one group or the other. What we can do instead, for example, when we're writing about a finance intern, is talk about what else she's done, what other groups is she a part of. How is she a whole human being beyond just that specific focus of the story? That helps students feel more connected and prospectives feel better identified." 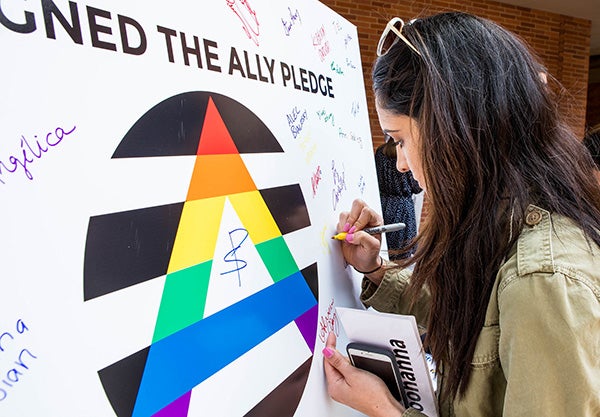 This year, Anderson LGBTQ+ Awareness Week also coincided with AROW, Anderson's "round one weekend" for prospective students to visit campus. At least one scheduled event included prospective Anderson applicants, as well as collaborators from the fully employed program and students in Anderson Eats, the club that promotes bonding over culinary experiences. Out@Anderson also sponsored a parenting and gender identity panel to discuss what it's like to be an LGBTQ+ conscious parent and part of a queer family, and LGBTQ+ interactive training by one of the nation's preeminent queer nonprofits, The Trevor Project.

This spirit of collaboration and engagement drives the changes Out@Anderson
stands for.