The national economy could face real issues by 2020 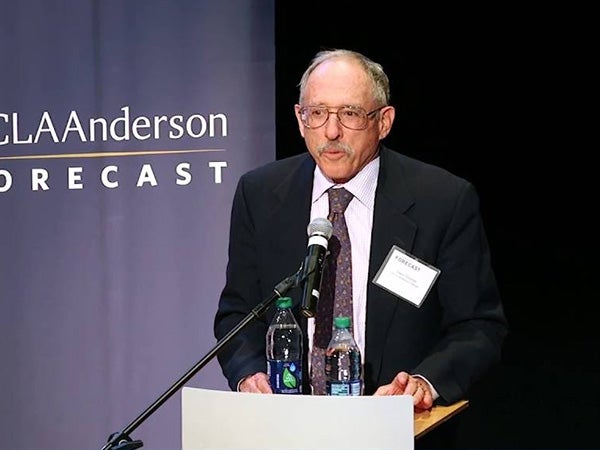 David Shulman (’66, Ph.D. ’75) is a senior economist with the UCLA Anderson Forecast, where he is responsible for creating and authoring the center’s widely read and respected quarterly economic forecast for the nation.
Shulman has had a long and distinguished career, both in academia and the business world. In addition to his current work with the UCLA Anderson Forecast — which reprises work he did with the group in the 1970s and ’80s — he is managing member of his LLC, where he is engaged in investment and litigation consulting. He comments on his blog, Shulmaven, and is a distinguished visiting professor and a managing director of the Financial Leadership Program at Baruch College in New York.

Shulman is credited with coining the terms “Goldilocks economy” and “new paradigm economy.” In 1990, he won the first annual Graaskamp Award for Excellence in Real Estate Research from the Pension Real Estate Association. He served in senior roles with Lehman Brothers and Salomon Brothers and, early in his career, he was an associate professor of management and economics at UC Riverside.
Q: If you had 30 seconds or a minute to describe your current forecast, what’s the key for you?

The title of the report is “A Wile E. Coyote Economy?” and it comes from a quote from Ben Bernanke in July, when he said that when some of the effects of the tax cuts and the new spending programs of the administration have run out, the economy could have some real issues in 2020.

Q: Broadly speaking, is a recession inevitable? It’s been a decade since the last recession began, and by 2020 it will have been a dozen years.

There’s no clock. It is not inevitable. We’re in a very unprecedented time because we’ve had unprecedented monetary policy for a decade, and now we have this unprecedented fiscal policy in peace time, a big tax cut and a big spending program increase on top of a fully employed economy. So this time really is different. We can’t look back in history to say, “Well, this is what happened then and this probably could happen now.” The other thing is, we think there’s going to be more inflation than what the market now expects and the market is expecting inflation of below 2 percent. We predict it in the high 2 percent. It doesn’t sound like a big deal, but that could mean another half a point to a full point higher on interest rates.

Q: What’s the biggest risk to the forecast? Not the risk that we enter a recession, but risk that the forecast goes in a different direction?

The biggest risk is that (the economy) could get much worse if the trade war escalates. It’s already escalated with China, it could escalate with Canada now that NAFTA is a done deal with Mexico. (Editor’s note: Subsequent to this interview but prior to publication, the United States, Mexico and Canada reached agreement on a trade deal.) On the plus side, this (might) just be a big negotiating strategy on the part of the Trump administration, and things could work out in 2019 on trade, where we come to a modus vivendi with China, NAFTA and Europe. I don’t think that’s likely, but that certainly would be very positive for the upside.

Q: Is the tax cut the biggest economic move President Trump has made?

The biggest economic thing he’s done is the tax cut with this big spending increase. He did that with the Democrats. Part was defense, which he wanted to do, and then he had this big increase in domestic spending in order to get his defense plan. So it’s both. And the other big thing is the whole trade policy. Oh, and the other thing is the deregulatory policy of the administration, and the deregulatory policy thus far has probably had a major impact, especially on small business.

Instead of worrying about what new regulation Washington was going to bring down upon small business, all of a sudden that fear is gone and I think that’s led to an increase in investment and optimism. You see small business optimism off the charts in all the surveys.

Q: One of the characterizations I read in your report is that we’ve been operating at what you call “full employment.” If the recession comes, does it mean that reverses? Will people start losing their jobs?

We have unemployment rising at the end of the forecast period and we have it bottoming at 3.5 percent; but we have it going over 4 percent by the end of 2020. That’s still close enough to full employment. Unemployment normally goes up two to three points in a normal garden-variety recession so, yes, that’s what you’ll normally see — a rising unemployment rate of two or three percentage points. That’s what normally happens in a recession. That’s not (just) 2008, that’s a normal postwar recession.

Q: What one or two things should lay people keep their eye on as they read the Wall Street Journal or watch the business news on television that would suggest that this forecast is coming to fruition, or something’s happened that might make things more negative or more positive?

I think the easiest thing is to look at the monthly employment report and the monthly inflation CPI reports. If we’re on track, unemployment initially will be falling, the amount of job gains will be less than what we’ve been used to because we’re at full employment, and inflation will be modestly up-ticking. This is monthly high-frequency data. If you want to look at weekly data — if you want to be geeky about it — you could look at new unemployment claims and (see) they’ve been running at record lows.