At Chipotle, You Are What You Eat

Brandt believes that what sets Chipotle’s brand apart is the company’s purpose-driven approach. “Food with integrity,” he calls it, pointing out that there was no shortage of naysayers to tell founder Steve Ells that what he was doing in just a few restaurants — serving food with high-quality ingredients prepared on the premises of every location as opposed to a central commissary — would not scale into a national chain.

“Innovation is number one because ideas differentiate you, ideas separate you and ideas win.”

Brandt notes that Chipotle serves “responsibly sourced, real ingredients, prepared with real cooking techniques” with a focus on sustainability. “Ultimately, we want to be that brand that you identify with not just because of what we sell but also because of what we’re about,” Brandt says. But being a company with a large and loyal following is sometimes a sword pointed on both ends. As Brandt puts it, “Chipotle is a unique animal. Sometimes we might get too much publicity for good things, and we certainly get too much publicity for anything bad that has happened.”

The “bad” Brandt references were a few past food safety incidents that affected a relatively small number of restaurants. “When you have a problem or incident of any sort, the answer is not to hide under your desk and be quiet. The answer is to be honest with people about what is going on, be transparent and be authentic,” Brandt says. “Those are core values of the brand. In a crisis, that is what works well and helps you to mitigate some of the effects. Then you have to hope time is on your side.”

Originally an engineering major as an undergraduate at UC San Diego, Brandt soon found he preferred economics and business. He became a banker and, when he discovered that everyone around him had an MBA, he decided to pursue the degree himself. Once at Anderson, he followed the finance track, which represented a continuation of his career, while also trying brand management, which shifted his focus from the B2B lending he’d been doing to exploring the wants of consumers.

He says he began to warm to the idea of managing a tangible (as opposed to a financial) product. After earning his MBA, he spent more than seven years managing brands at General Mills, became a brand manager at the Coca-Cola Company, and then became CBO/CMO at Taco Bell. After a stint as chief brand officer with Bloomin’ Brands (parent company of Outback Steakhouse, Fleming’s, Bonefish and Carrabba’s), Brandt became Chipotle’s CMO last April. 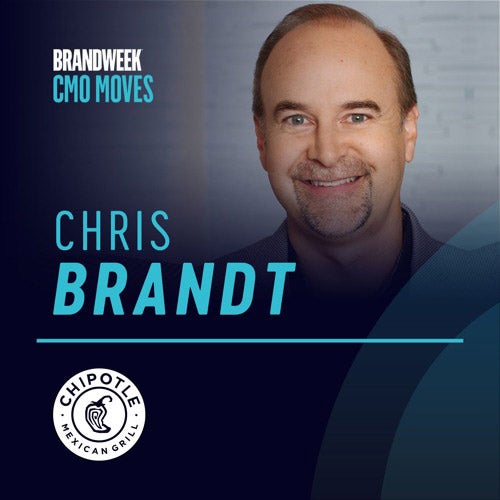 “It has been a tremendously satisfying career. There’s a lot of innovating that you can do,” Brandt says. “The rise of ’food as an experience’ has really helped the profile. It’s tremendously competitive but I have had a lot of fun.”

And speaking of innovating, do Chipotle’s marketing employees ever get to design a new burrito or bowl? Or is that all up to the chefs?

“I want new item ideas from every place we can possibly get them. Some of them are going to come from our head of culinary, who reports to me,” Brandt says. “I need ideas from my marketing team to go out and look at consumer trends (and) what everybody else is doing, what’s [happening] internationally. “They should all be working together and collaborating to figure out what is going on, (then saying), ’Here is our innovative twist that has never been done before,’” Brandt says. “I believe in ideas from everywhere. I ask my marketing team to do three things: I want you to be innovators, I want you to be storytellers and I want you to be collaborators.

“Innovation is number one because ideas differentiate you, ideas separate you and ideas win.” Brandt says the most impactful day he’s had at Chipotle was opening a store, where he experienced first hand the hustle and bustle of staffers unloading crates, chopping vegetables and preparing for the first customer of the day. He says that getting the processes down and learning how to scale an operation that uses only fresh ingredients required some pioneering preparation and cooking techniques.

“(There are) people working to make real ingredients easier to get, easier to grow. And with more access for everyone that seems like a noble cause for us and certainly fits with our ’food with integrity’ mantra at Chipotle,” Brandt says. Chipotle calls the program “Aluminaries” in reference to the aluminum foil that wraps their burritos, the idea being that things that are precious are wrapped in metal, not waxed paper.

“We are playing on that with Aluminary and trying to foster these folks who are working to make real ingredients more available, more efficiently grown and safer for everyone.”